On Saturday, October 5, volunteers from multiple Jet Linx Bases across the country taught young female aviators about the industry as a part of Girls in Aviation Day. The event was organized by Women in Aviation International (WAI), and 2019 marked the fifth anniversary of the initiative. WAI is a nonprofit organization dedicated to the encouragement and advancement of women in all aviation career fields and interests. They provide year-round resources to assist women in aviation and encourage young women to consider aviation as a career. Girls in Aviation Day is the most recent initiative for WAI, and it was celebrated all across the U.S. and the globe, from Botswana to Scotland. 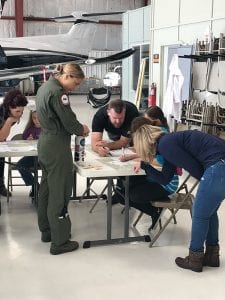 Volunteers from the Jet Linx National Operations Center were present at an event hosted at the Millard Airport in Omaha. Rachel Mesenbrink, Jet Linx Crew Records Assistant, volunteered and also brought her daughter along for the day. “Working in this industry, I want my daughters to know what I do and to be aware of the possibilities that an aviation career would bring them,” she shared. Mesenbrink was impressed by the attendance at the event, adding, “There was actually a waiting list to sign my daughter up, so that’s a positive sign for females looking to enter this field.”

rls with sectional charts and instructed them on how to spell their names using the phonetic alphabet – a staple in aviation activities.

“I was impressed with how many volunteers from Jet Linx and other aviation companies were there to assist at the event. That shows that support for females entering this industry is strong, and there appears to be a lot of interest from younger women as well. If I was a young girl attending this event, I’d feel very encouraged to push forward with a career in aviation,” Kelley explained.

Clarke has a unique background in aviation, and was able to bring those experiences to the event. She was part of the first mixed-gender class at the U.S. Air Force Academy, and went on to become a female pilot. Her ultimate goal was to become a fighter pilot, but the U.S. Congress did not allow females in combat at the time. However, her time as a pilot in the Gulf War – and other female pilots – proved that women were fully capable to fly in combat situations. Clarke knows the difficulties that can be mounted against women in the industry but sees a vast change in today’s landscape. 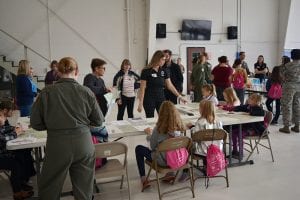 “It’s so important to encourage young ladies in their formative years and to give them these kinds of positive learning experiences. Their faces lit up when they succeeded at our station. It’s unfortunate that these opportunities simply didn’t exist when I was young,” she said. “However, the push here is not only for girls to become pilots. There are many facets of aviation that lack female participation. We need females in flight coordination, maintenance, and leadership. It only takes one positive learning experience to make a huge impact down the road.”

Brittany LaPour, a Client Service Representative with Jet Linx Omaha and a student at UNO’s Aviation School, is actively involved with the WAI UNO Maverick Chapter that helped to host the event. “We show girls that aviation is something that women can do, whether it be mechanics, engineering, pilots, you name it,” she stated. “I want young girls to know we are here and there are so many opportunities waiting for you.” 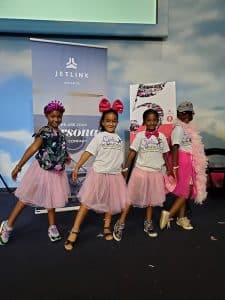 The National Operations Center was not the only Jet Linx team to show support for female aviators on Saturday, October 5. The women of Jet Linx Atlanta partnered with the Gone with the Wind Chapter of WAI to volunteer at their fifth annual Girls in Aviation Day. The event for girls ages 5 to 18 was held at the Delta Flight Museum with a goal to educate attendees on different career paths within the field of aviation.

During the event, Jet Linx Atlanta volunteers supported not just one cause, but two. They also donned pink tutus in support of the Jet Linx #Dare2Tutu project taking place in October that supports women battling breast cancer. The Jet Linx Atlanta team brought pink tutus and some other tutu-related swag, making their booth the most popular of the day!

Meghan Hogan, Director of Jet Card Sales in Atlanta, shared, “The Jet Linx booth was by far the most popular since you could spot our pink photo props from the other side of the museum! We had a fantastic time meeting the girls and their families, goofing around taking tutu pictures and supporting two great causes.” Hogan reiterated that a little support and encouragement can go a long way in inspiring girls to consider aviation as a part of their future career. “Our team was thrilled to welcome so many young minds to our booth and our company culture.”