Jet Linx, a private jet company with 17 Base locations nationwide, wrapped up our fourth year of partnership with The Tutu Project and the #Dare2Tutu campaign with astounding success. This year, in greater numbers than ever before, the Jet Linx family, our clients, community partners, friends (and even pets!) donned a pink tutu, snapped a photo and shared the image for a record-breaking year.

While last year represented a record, this year took the tutu to new heights. Company-wide, we received 1,275 photos in 2018 – a 193% increase over last year  – raising $25,500 in photo matches alone. Combined with an incredible increase in individual donations and bids from our Base silent auctions, the grand total for 2018 is $48,090 – with all funds raised going directly to The Tutu Project to support breast cancer patients and their families!

“The Tutu Project remains one of the most fun and rewarding charities we participate in,” said Jamie Walker, President & CEO of Jet Linx. “This cause resonates with our team nationwide, our clients, friends and family because it is a reflection of the values and relationships on which we build our business – this charity is personal, helping individuals on a personal level deal with the costs associated with this illness. The amount of support this year was amazing!”

The Tutu Project, founded by Bob and Linda Carey, is an organization dedicated to providing financial assistance for expenses not covered by insurance and promoting awareness for breast cancer patients and their loved ones.

Linda was diagnosed with an aggressive cancer in 2003, beat it, and then was re-diagnosed in 2006 – this time, with metastatic breast cancer – the most aggressive form. From Linda’s first diagnosis, Bob found solace in his professional passion, photography, and a pink tutu from one of his last professional shoots in Phoenix. For him, photography provided an outlet of self-exploration for dealing with moments of discomfort. “It’s just like facing cancer,” Bob explained. “Each image shows something about being vulnerable, or feeling isolated… and absolutely, each one has an element of humor and inspiration.”

Linda would share the images with the other women at her chemotherapy appointments. They would smile, laugh and share stories – and Linda began to learn of their daily struggles and sacrifices of their loved ones. The Carey’s had a brilliant idea – using the influence of Bob’s photos could afford them the opportunity to help these patients and inspire those facing the burden of breast cancer. 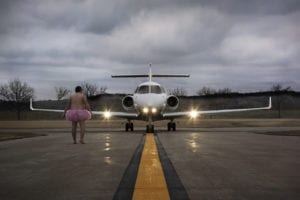 They embarked on a journey to self-publish a book packed with Bob’s tutu photography. A chance meeting after a university lecture provided them with a remarkable opportunity. A gentleman who happened to be a producer at the Today Show approached Bob after his talk. He was inspired by their story and by the images, and told him when they were ready to publish, to contact him and he would pitch the story. In 2012, Bob did just that. “Before you knew it, there we were, on the Today Show with Matt Lauer and Natalie Morales, with seven minutes and twenty seconds to share our story.”

After the broadcast, the Project went viral – selling over $60,000 worth of tutu prints to help fund their book in less than 24 hours. The book was published, selling out in the first round, and since then, The Tutu Project has continued to take social media by storm, raising money to support their foundation.

The Tutu Project #Dare2Tutu social media campaign launched in 2015, successfully raising over $50,000 after Bob challenged the world to join him in donning a pink tutu, striking a pose and sharing the images on social media with the hashtag. The launch of the campaign coincided with the start of the Jet Linx and The Tutu Project partnership. This year, the Jet Linx team worked to spread awareness and snag photos at an incredible pace. For many, the cause has a deep, personal connection, including Jet Linx Accountant, Julie Polson.

“I have a strong family history of breast cancer in my family,” Polson explained. “My mom, Cindy was diagnosed at 47 years old and is a 16-year survivor. She had a lumpectomy and has radiation treatments. My paternal aunt, Rose, is a 10-year survivor and she opted for a double mastectomy. My maternal aunt, Dawn, was diagnosed at 46 years old and is currently going through radiation. She lost all of her hair, but that didn’t stop her from having a Jet Linx-inspired tutu party in her town of Cherokee, Iowa!”

Polson also has concerns for herself as she inches closer to the age of her mom and aunt when they were first diagnosed. “I was recently tested to determine if I carry the BRCA gene. We are still waiting on those results, but I want to know so I can prepare and take precautionary steps. I also worry about my children as I have two young daughters. You never know –my daughters or I may one day need the services provided and funded by The Tutu Project. And we certainly have seen the impact this disease can have on others.”

Polson reflected during the time when her mother in treatment, and how support from an organization like The Tutu Project could have benefited her. “I’ve seen firsthand the inconvenience of trying to get to treatment when a family member can’t take you. My mom lived in California when she was diagnosed. She had only her husband to rely on to take her treatments, and when he couldn’t, she had to take the bus. She said that was one of the worst parts of the experience, because she often felt sick on the rides home. The Tutu Project may have helped her get to and from treatments through other means, and saved her from having to ride a bus full of strangers while feeling awful.”

Polson took the challenge to #Dare2Tutu to heart, and found great inspiration from members of the company nationwide come together to raise money. “I love that Jet Linx supports this cause and if all I have to do is get someone to wear a tutu – SIGN ME UP!” exclaimed Polson with a smile. “As I started taking photos of my friends, they offered to take pictures too – it just exploded from there,” she continued describing. “One person, Mary Rosenthal, offered to take photos because her mom is also a survivor. I discovered wherever I took the tutu, I met a handful of survivors that were more than happy to put it on and share their stories!”

This October, Polson, bolstered by her own passion and the energy of her friends and family, submitted the most photos for the month. “This was such a great way to connect with other team members and meet so many others outside the company who have been affected by this horrible disease. Next year, I have bigger goals!”

Jet Linx too, as a company, has visions of an even grander October next year. “Next year will mark the fifth year of our partnership with The Tutu Project,” said Jordan Maddex-Kopp, Jet Linx Vice President of Strategic Partnerships. “We see so many benefits from this effort, from the camaraderie built through friendly competition among our Base locations, to the number of clients and team members that feel such a personal connection to the cause, to knowing the end result is all funds raised reach real patients who need it most as they face breast cancer. We’re excited for what our fifth anniversary of partnership will bring!”

The 2018 fundraising results will mean big things for The Tutu Project. Through their efforts, The Tutu Project and their partners will be able to provide additional real-world relief to pateints and their families through funds to cover childcare, transportation, wigs and more. “The funds from Jet Linx this year could provide 1,920 patients with transportation to and from treatment, or 4,800 patients with an hour of childcare while they are in treatment,” noted Linda Carey. “Think about new, image-restoring wigs for nearly 500 patients. That is the sort of impact these funds can have. We are so, so grateful to Jet Linx for their continued partnership and the enthusiasm and passion they bring to the cause.”