Jet Linx provides an extraordinary private aviation experience because more than 500 team members across the nation simultaneously adhere to the same set of core values. These core values reflect a shared commitment to service that stretches far beyond any single act, and the Supply the High Five (STH-5) Recognition program seeks to celebrate those that go above and beyond for fellow team members, partners and Jet Linx clients.

“All Supply the High Five Grand Prize winners – past and present – share one commonality: in the course of their incredible efforts, they have allowed the Jet Linx core values to guide their thoughts and actions,” said Jamie Walker, Jet Linx President and CEO at the 2020 Jet Linx STH-5 Grand Prize Winner reveal event. “Hundreds of nominations are cast annually, all recognizing acts of selflessness, enthusiasm, compassion, integrity, and dedication. I often say that this is my favorite day of the year, and this is because we get to celebrate our values in action. I love nothing more than to see our team living our values and making a difference for our Jet Linx members and owners – and for one another.”

In 2020, there were 332 STH-5 nominations, with 39 monthly winners (representing 52 team members across all Jet Linx locations). A total of 11 Grand Prize finalists were selected by votes from the Jet Linx Supply the High Committee, which is composed of more than a dozen team members from different locations and different departments.

On February 23, 2021, Jet Linx celebrated Dakarai White and Powers Dicus as the Grand Prize Winners for 2020. The two Fleet Optimization Specialists both received numerous nominations throughout the course of 2020, but their winning nomination was cast on August 16 when the Fleet Optimization team experienced multiple simultaneous mechanical issues, impacting flight activity across the fleet. 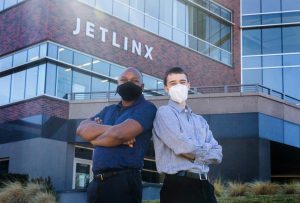 “In a typical shift, an isolated mechanical error might occur, but can be easily managed by a fully staffed team of five to six,” explained Nick Caruso, a fellow Jet Linx Fleet Optimization Specialist who submitted the prize-winning nomination. “With only three team members on staff that Sunday, White and Dicus persevered and troubleshooted problems for upwards of 13 hours. They never complained – they only looked at ways to solve the problems ahead of them.”

White and Dicus showed enthusiasm, dedication and selflessness in solving multiple problems at once. Their work allowed for smoother operations across multiple Bases nationwide, pleasing Base Presidents, pilots and Jet Linx clients alike.

“This nomination is one of many examples of how Dakarai and Powers Supply the High on a daily basis,” said Jonathan Hunter, Jet Linx Fleet Optimization Manager. “They both show flexibility and never hesitate to shift their schedules if that means it’s going to help the team. What’s even more refreshing is that they are two of our newest team members, yet they still lead the way with positive attitudes.”

“Speaking from my own experience, it’s very easy to let stressful and challenging moments get the best of you,” explained Erin Donnelly, Jet Linx Vice President of Revenue Management. “Dakarai and Powers took everything in stride and seeing their attitudes helped me to realign my own focus on our core values. They have displayed this kind of work ethic many times before, and I know they will persevere again.”

White and Dicus hail from the same graduating class at the University of Nebraska at Omaha’s (UNO) Aviation Institute. They first met as classmates, and now work closely together in the Jet Linx Fleet Optimization Department, relying on teamwork to handle the demanding situations that are commonplace in the department. White began his journey at Jet Linx as an intern in January 2019 and was then offered part- and full-time positions after his graduation from the UNO Aviation Institute

“What attracted to me to this company was just how embedded the core values are in the Jet Linx culture,” White explained. “It’s already rewarding just to be a part of that culture – but to be recognized as a leader in Supplying the High is extremely gratifying. Fleet Optimization is quite frankly one of the best teams I have ever had the privilege of being a part of. I have to credit my team for putting me in the position to succeed.”

Dicus started his Jet Linx career as an accounting intern when he double-majored in accounting and aviation – but during his internship felt his strengths would be better served in the Fleet Optimization Department. After graduating from the UNO Aviation Institute in the same class as White, Dicus began working full time for Fleet Optimization in August of 2019

“A big part of the job is knowing there might be problems – plans will go awry, aircraft can break (usually at the worst times), weather will cause disruptions, and situations are likely to change,” Dicus said. “However, we have whole teams devoted to executing the plans we put in place. Flight Control, Flight Planning, Crewing and Flight Concierge teams work together help to provide our clients with the best experience possible. Even during stressful times, it’s helpful to remember we aren’t alone.”

You can learn more about last year’s grand prize winner here, and about the work that goes on behind the scenes at the Jet Linx National Operations Center here.