Jet Linx team members work in alignment with five core values, executing them on a daily basis. Adherence to these values in all situations provides the extraordinary private aviation experience that Jet Linx clients deserve.

Team members across the nation submitted more than 300 nominations in 2019. Each nomination recognized an act of selflessness, enthusiasm, compassion, integrity, or dedication. From those nominations, the Supply the High committee selected 58 monthly Supply the High Five (STH-5) winners that were eventually pared down to six grand prize finalists.

In February 2020, Brian Walker, Director of Flight Coordination at the National Operations Center, was honored as the 2019 Supply the High Grand Prize winner. Walker began working at the Jet Linx National Operations Center in January of 2019. Although new to the organization, he quickly adopted the five core values and encouraged members of his department to do the same. During 2019, multiple nominations for Brian came from within and outside his department, and from Jet Linx Bases all across the country.

Jamie Walker, President & CEO of Jet Linx, was on hand to present the top culture award. “As the leader of this company, I cherish this award. Our core values are an expression of something larger than ourselves. To see these ideas take root in our employees and guide them daily – it makes this my favorite day in the year,” Jamie beamed.

Brian received his STH5 award and a special gift. Members of the Flight Coordination team affectionately refer to Brian as “Coach,” citing his unique ability to mentor and push his team forward. As a nod to this nickname, Brian also received a coach’s whistle with the Jet Linx emblem engraved on the side.

“Each day,” explained Brian, “we make the decision to be selfless or selfish; compassionate or distant; dedicated or apathetic; to have integrity or show dishonesty; to be enthusiastic or mundane. Our Supply the High culture asks us to break down those decisions, from the time we roll out of bed in the morning.”

Nominations for Brian highlighted his steadfast interest in building and supporting those on his team. “We’ve never been more thankful for a Director who watches out for us as much as Brian does, helps us out, and makes us feel confident in our abilities to succeed,” noted nominator Nicholas Kramer from the Flight Coordination team.

Team members praised Brian for his attitude and work ethic. “I’ve had the pleasure of knowing and working with Brian for the last ten years,” explained Erin Donnelly, Jet Linx Vice President of Revenue Management. “He’s the ultimate example of living our core values; his genuine joy and passion for his team encourages me to be a better leader and a better person.”

“My parents taught me that you can only control two things in life: attitude and effort. I framed this mindset around the core values here at Jet Linx and it has benefited my team,” Brian pointed out. “I never set out to win anything. As a leader, it’s my responsibility to do everything to the best of my ability. I owe that to everyone I work with.” 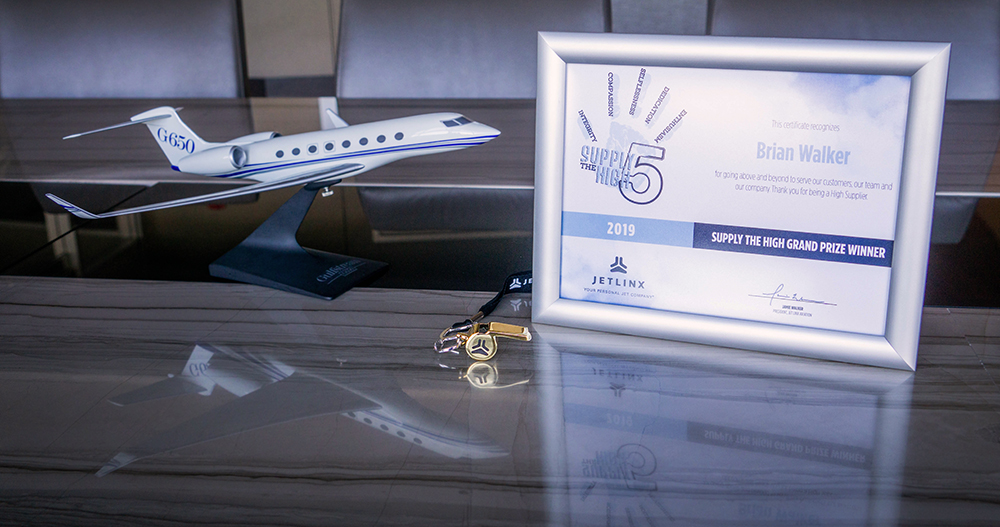