Interview with an Aviator

In this Interview with an Aviator, we explore the aviation career of Daryl Bartek.

Retired Lieutenant Colonel Daryl Bartek’s aviation career began on a baseball field near the rural town of Loma, Nebraska. Bartek was ten years old when a pair of J-3 Cubs  flew overhead, so close to the ground that the pilots yelled at the players  on the diamond.

Bartek, now a Ground Instructor at the Jet Linx National Operations Center, would never have guessed that a Sunday afternoon flyover would inspire a 40-year career in aviation.From flying a F-16 armed wingtip to wingtip with live munitions during combat missions over Iraq, to flying Bill Gates, Warren Buffet, and even Mikhail Gorbachev – Bartek’s career spans continents and decades.

Meet Bartek in this installment of Interview with an Aviator, and follow him on his journey through military and corporate aviation, eventually leading him to Jet Linx. 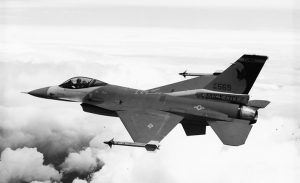 My earliest aviation-related memory comes from living in rural Nebraska as a kid. Area farmers would fly their J-3 Cubs off their grass fields as part of a small flying club. I was with my friends on a Sunday afternoon and we were playing baseball when a pair of these planes flew so close to us that we could hear the pilots shouting down at us. I thought that was pretty cool. In addition, I had an uncle who was a private pilot and a Catholic priest.

What kinds of aircraft have you flown?

What was your favorite aircraft to fly?

While the F-16 is a beautiful, powerful aircraft, I became addicted to flying low and fast in the A-7D. The A-7D was designed solely as an attack-bomber jet, while the F-16 is a multi-role jet (air-to-air fighter and air-to-ground bomber). The cockpit in the F-16 was a pretty busy place. I was monitoring/engaging multiple targets in the air, managing the radar and the weapons systems, while maintaining prebriefed tactics with wingman, in a single-seat plane. You’re multitasking while traveling extremely fast. I don’t know that I’d describe it as ‘fun’ per se, but it was an adrenaline-charged experience.

I flew the A-7 for about ten years, really enjoying the attack aircraft that’s geared towards air-to-ground missions. When you’re speeding at more than 550 MPH at 100 to 300 feet above the ground, it’s exhilarating. Even though at times it was painful pulling nine Gs in the F-16, flying beyond Mach 1 and maneuvering upside down on my back at 45,000 feet, I truly felt that, as John Gillespie Magee wrote in his poem High Flight, “I have slipped the surly bonds of earth.” 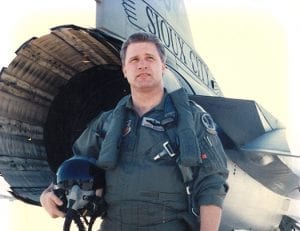 After a flight during his military service in 1996, Bartek heads to the “Debrief,” reflecting on the previous mission.

Could you provide a brief timeline of your military and corporate career?

My aviation career began in earnest when I turned eighteen and joined the Air Force as a technician for EC and RC-135 aircraft at Offutt Air Force Base in Omaha, Nebraska. After three years in the USAF, I went back to school at Iowa Western Community College where I earned an Associate Degree and began acquiring my pilot ratings through multi-engine. In 1978, I became a Copilot/Mechanic with IBP in Sioux City, Iowa. While living in Sioux City and working, I took college night classes and met a pilot already in the Air National Guard (ANG). He suggested I come down to the Base to take some exams. I did that, and three months later, I was on my way to be commissioned as a Second Lieutenant, immediately followed by two years of initial pilot training in the Air Force.

It gets a little convoluted after I joined the Air National Guard, with being both a civilian pilot and a military pilot. Initially I traveled to Knoxville for the Academy of Military Science and Officer commissioning school. I later attended USAF undergraduate pilot training at Williams AFB in Arizona. There I received pilot training on the T-37 and T-38.

After this, I traveled to Fighter Lead-In School at Alamogordo, New Mexico, where I was introduced to air-to-air maneuvering and air-to-ground weapons delivery in a T-38A. Then I took transition training in Tucson, Arizona, to fly the A-7D, after which I returned to my ANG Unit in Sioux City, Iowa (KSUX), and my civilian corporate aviation job. After flying the A-7D for 10 years in KSUX, I received further training at Luke AFB, transitioning to the F-16. I also managed to receive a bachelor’s degree from Embry- Riddle Aeronautical University in Professional Aeronautics.

During my time in the ANG, I deployed all over: South Korea, Germany, Belgium, England, Turkey, and Panama. Our presence in most of those countries was mainly as a deterrent. The most challenging yet rewarding flights were when my unit deployed in the F-16 to Turkey (post Desert Storm) to enforce the No-Fly Zone over Iraq. Each combat mission was anywhere from three to five hours in length intermixed with aerial refueling outside Iraq airspace. The mission was a Coalition of fighter aircraft from the U.S., Britain and France.

While in the Air National Guard, I moved on to working as a corporate pilot for U.S. West where I was a Captain on a Falcon 10 and Falcon 200. I also held a job with Hubbard Milling as a Chief Pilot and Captain on a Beechjet 400 in Mankato, Minnesota. I appreciate the fact that my employers were patient with me, allowing me the time away from my civilian job to perform military duty periodically over the course of those 20 years. Eventually in 2000, I retired from the Air National Guard with 23 years of military service under my belt, gratified to have served my country. I had risen to the rank of Lieutenant Colonel.

Before joining Jet Linx, I worked at Principal Financial Group as their Director and Chief Pilot. I was Captain on a Sovereign 680. In 2018, I retired from corporate flying after 40 years in the industry. I knew I wasn’t ready to throw in the towel completely – I enjoy instructing the newly hired Jet linx pilots.

What was it like to work as a military and a corporate pilot at the same time?

One huge difference between corporate and military flying is in the military you’re always pushing the flight envelope of the aircraft, while in corporate flying your goal is to not spill the passenger’s coffee. Total opposites.

What made you want to serve in the military?

Initially, I sought to become a military pilot to gain aviation experience and further my career, but later it became a sense of duty, a very powerful motivator. I had several uncles serve in WWII, all of whom I respected a great deal. That sense of service and duty rubbed off on me. At the time, in the Vietnam War era, entering the service was not the most popular choice. But I was proud to serve and represent my family and my country. 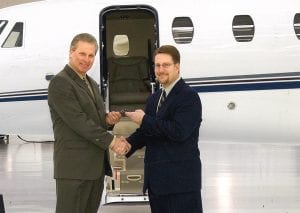 As Chief Pilot, Corporate Aviation, for a previous employer, Bartek takes possession of a new Citation Sovereign during the factory delivery through a traditional key exchange.

Do you have any unique stories about your travels around the world?

This one blends in with my time in the military. As part of a show of force against the Soviets, my squadron deployed and flew along the borders of Eastern and Western Europe during the 1980s. As we would fly across Europe, I considered my Czech heritage. I always wanted to visit my family’s home – a small village in Moravia – but I was simply unable to enter that area as a United States military figure.

However, years passed, and the Soviet Union fell. Borders slowly opened and in 2014, I made a trip back to the Czech Republic to visit my family’s relatives and original home. That was a unique homecoming for me, as the last time I was in that area I was flying military missions near what was considered hostile territory. I was glad to see that wounds from world wars and geopolitical divisions had begun to heal. There was a point in time where I thought I may never get to visit my family’s origin, so that was special for me.

Have you flown with any noteworthy passengers?

My most “valuable flight” was taking both Warren Buffett and Bill Gates to Palm Springs, California, (I refer to it as the $100 billion flight). Another notable passenger from New York to Omaha was Mikhail Gorbachev. This was after the Soviet Union had fallen and Mr. Gorbachev was on what I like to refer to as a ‘PR’ tour. He was speaking in Omaha and we flew him in. He was cordial and respectable. I do recall it was quite early in the morning, yet he and his peers were enjoying some Russian vodka.

What advice would you give to young or aspiring aviators?

Be prepared to embrace the next opportunity and/ or challenge by furthering your education, taking on additional responsibilities and being a good citizen. Looking back on my career, when I was flying the CE-150 around the practice area learning the basics of flying, I did not envision becoming a chief pilot, much less a fighter pilot. You need to always strive to improve yourself – skill set, work ethic, team player, positive attitude. It wasn’t a straight line to my achievements. There were setbacks along the way, but I learned to not give up. Success can be defined in different ways and is unique to an individual. For me, it was pursuing a passion which required tireless hours of hard work and lots of sacrifice.

What do you enjoy most about working at Jet Linx?

Having the opportunity to return to the aviation industry as a ground instructor allows me the opportunity to welcome the next generation of new aviators to Jet Linx. It’s been exciting for me to learn on-demand flight operations.

How do you relate to the Jet Linx STH5 culture?

Jet Linx has a very inclusive culture – promoting individual input, which is not only appreciated but sought out. It’s important to me to be part of an organization with integrity, where commitment to safety and customer service are of utmost importance. The future is about growing the company with leadership practicing “bottom-up” management which is unique in today’s corporate environment. It’s a great time to be with a company during an exciting period of growth.

← Above and Beyond: Elevate Your Business with Jet Linx Corporate Jet Solutions My Home Base - Yvette Green, Jet Linx National Operations Center →