The University of Nebraska at Omaha and Jet Linx have forged a partnership that positions students for success in aviation.

Josh Carstensen didn’t know what to expect when he began his internship with Jet Linx in 2012. His first job in aviation was in a Part 135 operation working with cargo flights. The position exposed Carstensen to a wide variety of tasks in the industry. “At that job, I was a one-man band: I could sell the flight, dispatch the crew, work out weather concerns, talk to the customer – everything up to the point of going to load the plane,” he laughed.

Carstensen enjoyed the work, but when he talked to his advisor about an internship credit he needed, a new opportunity arose. “I talked to Scott Vlasek [the director of the Aviation Institute at the University of Nebraska Omaha] and he said I should really check out Jet Linx.” His cargo flight job could have satisfied the internship requirement, but Vlasek thought that the pairing of Carstensen and Jet Linx could be a good fit. “He said it’s a good company, really starting to take off, and asked me to give it a try. He said, ‘You never know. You might fall into something you really like.'” He began working at Jet Linx as an intern through the University of Nebraska Omaha’s Aviation Institute during the fall semester in 2012. Carstensen was hired as a part-time employee a couple of months later and hasn’t looked back. Today, Carstensen is Crew Coordination Manager at Jet Linx Aviation’s National Operations Center, and is among a growing number of the Jet Linx team in Omaha and beyond that call UNO their alma mater.

Today, Jet Linx works with UNO through an internship program, sponsorship of the flight team, and sponsoring the annual Aviation Institute golf outing to raise funds for scholarships. The partnership came naturally to Jet Linx: Vlasek attended the Aviation Institute at the same time as Jet Linx Executive Vice President Jay Vidlak and Vice President of Operations Jason Vanis, and the three have been friends ever since. The inspiration for the internship program came to the three sometime around 2005 during a meeting. “Jason and Jay both talked about how they wanted to give back to the University. The internship was one way that we mutually thought would be a good way to start,” Vlasek said. At the time, aviation internships and careers in Omaha were more difficult to find. “When the [UNO Aviation] Institute started in 1990, there weren’t a lot of opportunities for alumni to stick around here,” he explained. There were a few opportunities available at the airport, and a few at corporate flight departments, but the variety of opportunities available now has increased, in part thanks to the continued growth of Jet Linx. “It’s really grown – a whole host of opportunities have opened up for students to stay in the area and work in aviation.” 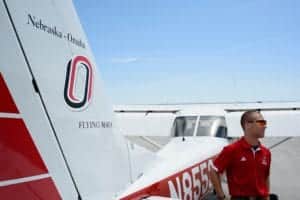 Before the UNO-Jet Linx internship program was founded, private aviation internships also weren’t as prevalent, with only two or three internship opportunities available. “We thought it would be a great idea to have a student come in for one semester and just start following and learning more about what private aviation is more about. When I was going through the aviation program myself, everything you learned was about commercial aviation,” Vanis remembered. “We didn’t really get to experience what happened on the other side of the airport.” Other learning opportunities were available for future pilots in private aviation, but there weren’t such opportunities in the back office side of things, including scheduling, maintenance or operations. “There’s also accounting and marketing and so many other things that we need to support a company like ours, so having this internship is a good opportunity for everyone,” he said.

The Jet Linx internship originally began in the scheduling department, which still manages most of the program today, but the doors are open to students to work in different areas. “We try to open it up and let the students, depending on what their interest is, kind of dabble. We’ve had a couple of them take advantage and want to sit with maintenance and other departments as they’ve gone through the program,” Vanis remarked.

Vanis sees value for students, the university and Jet Linx in the partnership and intern program. Students gain invaluable real life experience seeing the private aviation industry in action. “It’s real time. They see the company in operation and we encourage them to speak up and say what they want to learn during that semester, so we can help them achieve their goals,” he said. The internship complements the University’s teachings, which have expanded since Vanis attended. “The educational focus includes more on some of the private aviation business now,” he explained. More students are interested in the private aviation aspect since the course offerings provide an introduction. Vanis says the value to the students is the most important aspect of the program. “It’s an important way for Jet Linx and the students to get to know each other over a semester. Even if the student decides to pursue a professional opportunity outside of our company, it’s still ok because they got to see another part of the industry and we got to meet an individual who is going to be a part of our industry. It’s a great way to give more students opportunities to see the real-life working environment of the industry they’re going into.”

Vidlak echoes Vanis’s sentiment. “I think it gives the students an inside look into what the aviation industry is really like. When most students think of aviation, they just think of being pilots, but there’s so much more to experience,” he said. Throwing open the doors of Jet Linx lets UNO students see that the aviation industry expands far beyond flying alone. “It’s a really, really cool thing and I wish I had the opportunity to do something like this when I was in college,” he noted.

The interns work in different sections of Jet Linx’s flight operations teams. Erin Donnelly, Director of Fleet Management, works with them throughout their time at Jet Linx. She first meets with the students to see what area piques their interest. “The three different options we put them through are utilization and charter, that’s the business analytics/sales piece of the industry. Flight coordination is more operations and weather, and then safety and operations is more safety minded, less day-to-day operations like flight coordination and more operations on a grander scale,” she explained. Interns divide their time between the three areas of operation, usually starting with utilization and charter, moving into flight coordination and finishing with safety and operations. “It’s almost the same system as with a new employee; we put them through some kind of cross training and training on materials, then it’s a lot of hands-on activity. We really treat the internship stepping-stone to working here.”

Donnelly works very closely with Vlasek and Jet Linx posts on the UNO job board. “When I need somebody with specific traits, I’ll let Scott know. And anytime we get a résumé from [someone who attended] UNO, I always refer back to Scott.” The system has worked well for Donnelly’s team: over half her team attended UNO, including two who participated in the internship program.

Hunt is grateful for the experience he’s gaining while attending school. “I have learned a lot about the industry and gained a lot of experience,” he said. He’s been able to take the opportunity to learn how the business works, and to meet with others with industry experience. “The best part has been the networking opportunities I’ve been given with pilots and others in our industry.”

Carstensen points to Vlasek for his success in his career at Jet Linx. It wasn’t easy for him to agree to the internship: he was still working nights at his job, taking classes, and would work at Jet Linx mornings after his night shift twice a week. “It was all Scott, because he wanted me to diversify a little bit and expand my horizons,” Carstensen remembered.

Carstensen saw the opportunity to grow with Jet Linx. He would still be working on demand, ready to think on his feet and problem-solve. He loves that everyday is different. “I enjoy the Part 135 aspects of what I am doing – that kind of on demand operation really excites me. We don’t have a schedule: we are here to serve the customer and work out any problems,” he said. The chance to “identify potential problems and find solutions” is what helped Carstensen make the jump from his cargo gig to Jet Linx. “I knew I could take what I was doing in my previous gig to another level here. It’s completely changed my career.”

His leap of faith paid off. Since starting with Jet Linx, Carstensen has gone from intern, to part time, to full time, to now, a leadership role. “The internship led me to where I am today, running the flight coordination department within three years of my first day here. That program gave me the ability to step in and show what I could do – I’m excited to see where else Jet Linx takes me.”