Your first flight in the left seat is something you’ll never forget. As you move closer to the horizon and begin the ascent, it’s not just the airplane that’s lifting: it’s your sense of wonder and self-confidence. 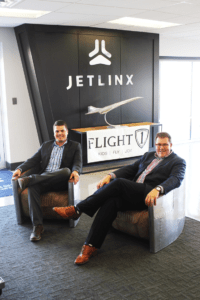 That elation is hard to find just anywhere, and for some kids, it doesn’t seem attainable. That’s why Indianapolis’ Flight1 has stepped in to help kids facing difficult times find a renewed sense of self-confidence through the power of aviation.

Marcus Strawhorn founded Flight1 in 2011 and held its first event in 2012. The three-year program is open to children who face health challenges or those who have lost an immediate family member. Inspiration struck Strawhorn after he received a diagnosis of a rare type of stomach cancer. “It took about six months for them to figure out they were wrong,” he recalled. “But it was across three hospitals in Indianapolis and a week at the Mayo Clinic.” Before being medically cleared, Strawhorn ruminated on the lessons he wanted to leave his two young sons. He used the experience to springboard plans for Flight1 into action. “I thought back to when I became a pilot and how it was one of the most profound moments of my childhood. The self-confidence I gained was immeasurable and I still carry it with me today,” he remembered. Today, Flight1 offers children a chance to gain that confidence through the magic of aviation. Children learn about aviation, practice flying in full-motion simulators, and then learn to pilot a plane by themselves. Participants work with a Certified Flight Instructor to take control of a Cessna 172 Skyhawk. They are accompanied by and under the direction of the flight instructors, but it truly is the Courageous Flier participants who operate the aircraft.

“It’s immediate, seeing the difference in the kids. They know the difference between just experiencing something and accomplishing something, so they know that they’re not just going for airplane rides – they know they’re the one doing the preflight inspection, they’re the one sitting in the left seat; the pilot in command,” Strawhorn explained. “And reinforcing that from the time they show up that they’re the ones making the decision and they’re the one in control, you can see when they leave the airport, they see themselves differently. You can see within a day that the kids are more confident. It’s not just a short-term thing; it’s long-term. There’s a girl who was seven years old at the time, and she went through the first year of the program when she was six. She came back for a second year, and went through the flight simulator and was going to fly the plane, and she wanted to take her babysitters with her. The babysitters were a couple of teenage girls, and they were nervous and they weren’t sure whether they wanted to go or not. And this girl says, “Don’t worry about this, I’ve done this before – I know what I’m doing.” It was telling to see that seven-year-old girl and her confidence in her ability to fly the plane.”

Stories like this might be commonplace to Strawhorn, but each one is special and brings a sense of renewed purpose to him and the Flight1 team. “With every kid, there’s some positive aspect of their participation I find valuable and it’s the accumulation of these stories over time that I find rewarding. Just about every moment I spend with the kids, there’s something specific and rewarding about it, knowing that what we’re doing is having an important impact,” he recalled. 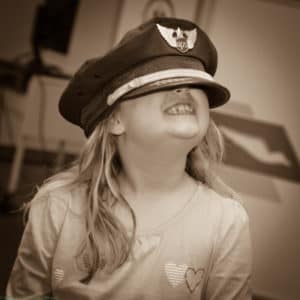 “There’s a boy who was going through chemo when he was 15: he had leukemia and he wasn’t able to get his drivers’ license, but he played video games and he played flight simulator games. So when he went to the full-motion simulator, he knew what he was doing and he knew how to fly the plane. The flight instructor continued to increase the level of difficulty, and by the time he was done, this kid was flying in conditions with zero visibility, and was able to land the plane just like a commercial airline pilot.

“So this kid who didn’t have the opportunity to get his drivers license and didn’t know how to drive a car – and he didn’t want to get his license, he wasn’t sure about his reaction time because of the chemo – was able to go here and fly an airplane in the simulator better than or equal to a commercial airline pilot.”

Strawhorn points to experiences like this that give him the energy to keep Flight1 flying forward. “It was nice to be able to show him what he could do, and that he could do more than a lot of pilots can do. He was good at it,” Strawhorn explained. The program sometimes provides more than just an outlet for increased confidence; it provides a new hobby for the students. “There have been other situations when students who went through the program and decide aviation is their passion, and this kid did just that. Before Flight1, he had no interest in aviation at all, but now he has something to focus on and something to get excited about.”

Not every participant in Flight1 becomes an aviation hobbyist. “That’s not what Flight1 is about,” Strawhorn said. Rather than instilling a lifelong love of flight, the program’s focus is on providing experiences to boost confidence through a variety of outlets, in addition to the Courageous Flier program. “Some of the other programs that we have focus on kids who can’t make it to the airport,” Strawhorn clarified. “Some kids live too far away and can’t come to Indianapolis, and kids come to the area for a summer camp. We work with local children’s hospitals and camps for children with illness, and we go to their camp with a hot air balloon. It’s not the same confidence building experience, but still a meaningful one, piloting a hot air balloon. It gives them a different perspective on their situation and a chance for control. That program is not ongoing like our airplane-based program, but it provides the aptitude they need to think it through. It encourages them.

“Another program we have is called the Victor Crew,” Strawhorn continued. “That’s a group of teddy bears that travel around the world and get their pictures taken doing exciting things. Those bears go to kids who are sick or in the hospital and aren’t able to do activities themselves, so they get to build a sense of confidence vicariously through the bears who are out exploring and adventuring across the globe.” Pilots and passengers around the world contribute to the Victor Program’s success, documenting the bears’ trips through photos that are presented to children with the bears. Pilots also contribute to traveling logbooks that are handed off from pilot to pilot, completed and given to children who aren’t able to participate in Flight1’s in-person programs.

Jet Linx Indy has found a natural partnership with Flight1 since the group’s early stages. “I first found out about Flight1 when a contact of mine at another nonprofit asked me if I would talk to Marcus,” said Casey Blake, Jet Linx Indy Base President. “We sat down and discussed his vision relative to Flight1; why he started the organization, and he asked me if I’d be willing to spend some time with him to help develop the program.”

Sales Administrator & Client Service Specialist Hunter Musselman learned of the group through Blake before his tenure at Jet Linx began. “I was a sophomore or junior at Purdue and involved with the Purdue University Chapter of American Association of Airport Executives (AAAE). Casey emailed me asking for Flight1 volunteers for an airshow here in town. One thing led to another, Purdue and AAAE got involved with Flight1 and the rest is history.”

“Flight1 is a great resource for the community and I think it allows children who face real struggle to get exposure to aviation – and what kid doesn’t like airplanes? Flight1’s mission is to build confidence in children of all ages and I think that aviation is a great tool to get the focus off their day-to-day issues,” Blake said. “As the organization started to grow, Marcus needed board members. I said of course I’d help, and so my involvement grew and I’ve now been on the board for three or four years.

“It’s really gratifying to be involved in an organization that’s not looking for anything in return,” Blake continued. “All they’re looking to do is help these children in our community and offer them an experience they can’t get on their own through aviation. When you see these kids’ faces when they get to sit in a simulator or go to an airport and watch Pixar’s Planes in an airport hangar, it’s something I think we in the aviation business take for granted. We get to go to the airport and see these multimillion-dollar planes every day. It’s gratifying to share what we see on a day-to-day basis with someone that might never see – let alone pilot! – an airplane.”

Musselman also noted the joy he sees in Flight1’s participants. “The pure joy and excitement on these kids’ faces is what makes us do what we do and work out all the logistics, emails and board meetings,” he explained. “It’s the most rewarding thing about it. It doesn’t take a significant financial contribution or a lot of hours. The return on that investment is tenfold when you get to see the kids go through the program and the pictures of their smiling faces after their first flight. It’s so worth it.”

Now in its third year, Flight1 is seeing its first group of students graduate the program – but these kids aren’t planning to leave just yet. “What we’ve found is after three years the kids are still very interested and want to participate. Many will now return as mentors for the new kids coming into the program.” That’s a powerful connection made by aviation.