Under the Lights at Jet Linx Atlanta

The sounds of great jazz swirled on the Jet Linx Atlanta ramp at Peachtree-Dekalb Airport in October 2015, and clients, friends and the Jet Linx Atlanta team came together to celebrate another successful year in Atlanta, Ga. The Anniversary Celebration marked another year of growth and development for our Atlanta Base, which has seen a swell of new Jet Card clients, numerous additions to their local fleet, and even new team members added to the Jet Linx Atlanta family. 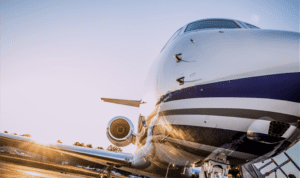 The continued growth has brought excitement to the Atlanta Base. “The growth in our client base, new friends in the community, new team members and the increased public awareness of just who we are has been exciting to watch,” said Ron Smith, Jet Linx Atlanta Base President. “There couldn’t be a more exciting time.”

The jazz-themed anniversary event saluted the Atlanta Base success in style. Natalie Snodgrass, a veteran Client Services Specialist with Jet Linx Atlanta, played a key role in orchestrating the magical evening, from selecting the theme to finding the right partners to execute her vision. The entertainment for the evening, a local jazz trio called The Ruby Reds, provided the inspiration for the event. “When I started planning the anniversary party, I immediately envisioned café lights strung up on the ramp. I thought the jazz band would be the perfect compliment. I mostly shaped the evening around the band, which led to our New Orleans-themed menu,” Snodgrass explained.

According to their website, The Ruby Reds Band may be the oldest, continuously operating jazz band in Georgia. The band was formed in early 1966 to perform nightly at a beer hall and banjo sing-along parlor called Ruby Reds Warehouse, and has been playing throughout the Southeast ever since. Over their 49+ year history, they’ve “played for nearly every major corporate entity in the state,” and have been composed of different musicians with the same passion for jazz music. Current members Rocky Ball, L.A. Tuten, and Marty Martin now carry on the Ruby Reds tradition, with a “pledge to add another 40 years to the band’s legacy.”

The menu from Soiree Catering brought an edible air of Bourbon Street to the airport ramp. Guests enjoyed numerous New Orleans-inspired appetizers, including crabmeat and corn beignets, cajun shrimp and grits shot glasses, open faced croque monsieur with ricotta, and chicken and sausage jambalaya cups. Guests could also visit the crepe station where the chef would whip up a selection of homemade savory and sweet crepes, from ham and Gruyère to strawberries and whipped creme. 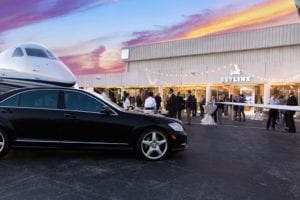 Every detail came together to create a memorable ambiance, from the food and music to the flowers. To usher in the crispness of fall, Snodgrass created autumnal floral accents with pumpkins and other nods to the season. “This is my favorite part about doing events,” she said. “I love making flower arrangements! The pieces adorned our private terminal and brought the feeling of fall to tables on the ramp.”

A Jet Linx celebration would not be complete without exceptional aircraft on display, The Atlanta event allowed guests to tour a G550. The G550 is a prestigious Robert J. Collier Trophy winner, and can accommodate up to 18 passengers while maintaining the ability to fly non-stop for over 12 hours. The G550 on display was “a huge hit that framed the evening perfectly,” according to Snodgrass. “Our guests really enjoyed exploring the aircraft.” Smith agrees the Gulfstream demonstrator was a highlight of the evening. “The G550 is certainly a ‘top of the food chain’ aircraft,” Smith commented. “Folks enjoyed the ability to see one of these large cabin jets up close and personal.”

Smith and the rest of the Atlanta team see nothing but blue skies ahead. “I feel very fortunate to be a part of such a great group of dedicated people,” he noted. “With so much room for growth in the local market, I know we’ll have much to celebrate in the future as well.”