ON THE COURT WITH VENUS WILLIAMS AND WASHINGTON KASTLES

Six-time World TeamTennis Champions, the Washington Kastles, have proven their place in the sport of team tennis with their record-setting, five consecutive title wins and an accomplished roster that is tough to beat. Based in Washington D.C., the Kastles play in an intimate stadium, the Charles E. Smith Center, and offer a high-energy stadium experience for their fans with music between points, cheerleaders, team mascots Topspin and Slice, and their coined team chant “refuse to lose.”

The Kastles made their debut in 2008 with a talented team featuring some of the world’s best tennis players and added 23-time Grand Slam Champion Venus Williams in 2010, who just completed her seventh season with the team. Williams described what performing for the Kastles has meant to her. “I always look forward to the season,” said Williams. “I always say, my toughest matches are World TeamTennis. It’s so much pressure. It’s not easy, rising to perform, when you’re bringing back the title, not just for you, but the whole stand cares – as a city. It’s a whole other pressure. You feel good when you can sit on your bench and say, I got some games for my team.” Venus’s defining moment in World TeamTennis came in 2012, when she clinched the WTT Championship for the Washington Kastles. She’s often called it one of her most memorable on-court experiences.

The Kastles talented tennis brother duo, Men’s doubles legends Bob and Mike Bryan, will never forget walking into Kastles Stadium the first time to play for Washington. “We knew the excitement that was happening in DC,” said Mike Bryan. “We walked into the place. It was sold out. There was so much energy in the arena. Murphy Jensen [Kastles head coach] was bringing the excitement from the bench. We felt like we were playing for a proud franchise.” Bob Bryan added, “We had a lot of momentum before we even stepped on the court. We played a great night. I remember it was a magical moment for us.”

YOU FEEL GOOD WHEN YOU CAN SIT ON YOUR BENCH AND SAY, I GOT SOME GAMES FOR MY TEAM.

Team tennis is unique in that players perform as a team in an otherwise individual sport. Australian Open doubles champion Robert Lindstedt, who played his first full-season with the Kastles this year, described what playing team tennis has meant to him, “A lot of guys talk about what it’s like to be on a team. I think everybody loves it, because we don’t get to do that, at all. Yes, you play doubles and it is kind of a team, but you are kind of an individual. Being part of a team is something different. It’s nice to be able to fight for someone else and have someone else fight for you. It’s a very giving feeling and that’s something I really love and thrive on.”

The most winningest team tennis franchise, the Washington Kastles, was founded by Owner Mark Ein. Ein is an investor, entrepreneur and philanthropist who has both created and acquired a list of growth companies from a diverse set of industries. Among these companies are Kastle Systems, LLC, the leading provider of building and office security systems, and World TeamTennis, which Ein acquired from Billie Jean King in 2017.

Tennis has always been one of Ein’s passions. Starting as a ball boy at professional tournaments in Washington, the sport has always been a part of his life – as a player, a volunteer, a fan and a teacher. He even dreamed that one day he would become a professional tennis player. Although his pro tennis dream was never realized, Ein was able to use the lessons he learned from playing tennis throughout his 25-year business career. “Tennis is unique in that it is mostly an individual sport where you learn about discipline, self-reliance, continuous improvement, fair play and hard work,” Ein said.

As his career developed, he wanted to use tennis as a platform to inspire his community and to give its youth the opportunity to explore tennis and to have the same influence in their lives that it did in his. With this in mind, Ein conspired with World TeamTennis founder Billie Jean King, about the idea of bringing World TeamTennis to Washington D.C. Shortly after, their idea came to fruition and the Washington Kastles entered the D.C. sports world.

“When I started the team, I decided that I would do it with a community mission,” Ein remarked. The team’s mission was to bring the community of Washington together, promote the sport of tennis and physical fitness, create a fun summer activity for the community and help local charitable partners. This community mission not only motivated the fans to set World TeamTennis attendance records, but even inspired the team’s players to achieve historic accomplishments on the court. “This team became a shared experience for everyone in Washington, D.C., and it has been one of the most rewarding experiences in my life,” Ein exclaimed.

As a native to the Washington D.C. area, Ein is an active member of the community and its charitable organizations, including the D.C. Public Education Fund, which has raised $120 million to support local public schools. He has been honored with a list of awards and accolades for his business leadership and philanthropic efforts.

The Washington Kastles organization’s charitable contributions also reflect Ein’s passion for philanthropy. In 2009, Ein was bestowed the Key to the City by Washington D.C. Mayor Adrian Fenty for not only the Washington Kastles’ successes on the court, but for their commitment to serve the community and its youth. The Kastles have donated hundreds of tickets and auction items to charitable organizations. Every year, the team gives out 1,000 tennis rackets (11,000 total!) and balls to kids 12 years old and under – encouraging them to play tennis and engage in physical fitness. They want kids that are inspired by the talented Kastle players, to have a racket that they can go home and play with. Over the past 11 years, the Washington Kastles have given $1.5 million charitable donations to over 300 organizations.

This year, the Washington Kastles held their 6th annual Charity Classic. The signature event featured members of the government, media personalities and Washington Kastles players. A few of the 2018 Charity Classic participants included NBC News correspondent Peter Alexander, International Tennis Hall of Fame Coach Nick Bollettieri, CNN’s political analyst David Gregory, and former and current senators and congressmen from both sides of the aisle. Two teams, the Stars and the Stripes, provide the crowd with plenty of entertainment as they engaged in a friendly, team tennis battle for the coveted Kastles Cup. The real winners, however, are the list of charities that received 100 percent of the ticket proceeds.

THE TEAM BECAME A SHARED EXPERIENCE FOR EVERYONE IN WASHINGTON D.C., AND IT HAS BEEN ONE OF THE MOST REWARDING EXPERIENCES IN MY LIFE. 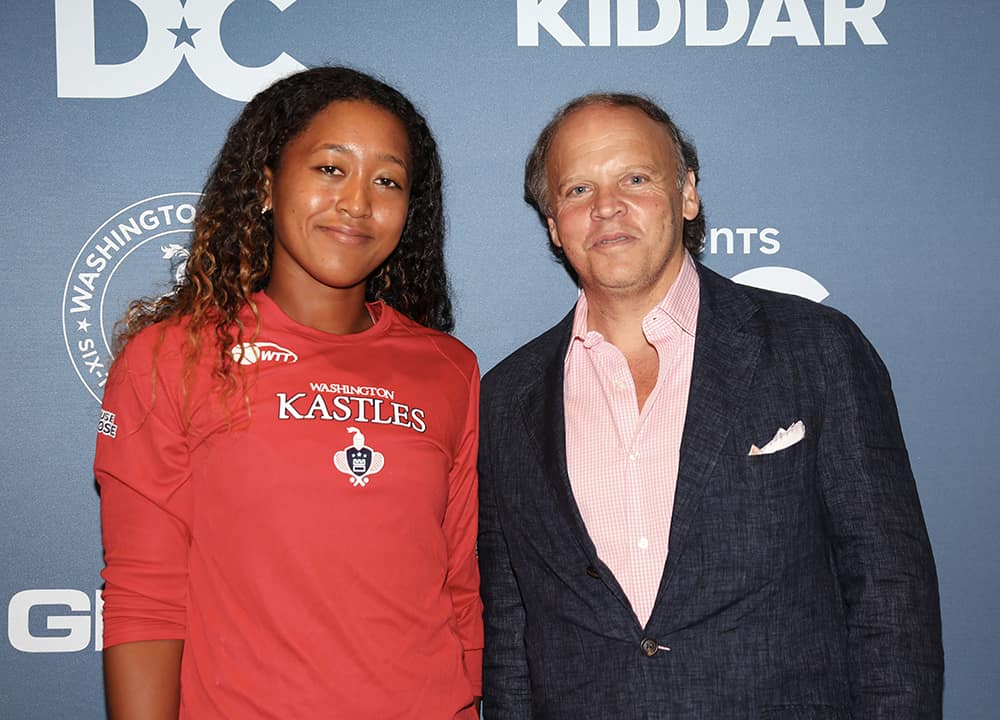 Not only do the Kastles know how to put on a good match, they also know how to provide an unforgettable VIP experience. The signature VIP Dream Seats, extended to both individuals and companies, is truly an extraordinary sports experience and includes a three-course sideline dinner for four catered by Washington’s best caterer, who also caters for the White House. The Dream Seats ticket holders are treated to pre-match VIP hospitality with complimentary bar, premium wine and hors d’oeuvres, VIP parking and invitations to exclusive Kastles social events. Companies can also bring groups of people for a meet and greet with players before the match. Another courtside seating option is their Baseline Experience – sectioned seating right behind the court, where guests can watch serves coming toward them at 135 miles an hour. It is an experience that has never been done before in the world of tennis.

Ein described a Kastles event as the closest you’ll ever get to watch the best tennis players in the world play in a fan-friendly, exciting atmosphere. “It’s an intense competition. It feels like you are watching a tennis match in a basketball environment,” exclaimed Ein. “What is the most satisfying is when I look around the stands in our stadium at the end of each match, and I see thousands of people in my hometown with their friends, family and colleagues, having a great night and making memories that they’ll have for the rest of their lives. Bringing  a championship team to the city that I  grew up in and seeing the joy that it has brought so many people, is an indescribable experience.” Players have even said they feel more pressure playing for the Kastles than the U.S. Open because they are playing for a team, engaged fans and a community. “I want to win,” said Kastles all-star player Frances Tiafoe. “Everyone is so invested. You can feel that. It makes you want to give your best out there.”

This year, Jet Linx was bestowed the honor of becoming a Washington Kastles sponsor. Having been a fan of Jet Linx and their company culture for many years, Ein believed that a Kastles and Jet Linx partnership would be the perfect collaboration. “We thought it was a great fit because we both do things at the highest level,” said Ein.  “We are a fan-centric organization and Jet Linx is a customer-centric organization.”  Jet Linx Washington D.C. Base President Josh Rosenblatt felt the same sentiment about their partnership. “The Kastles team promotes a dynamic brand of tennis, sportsmanship and community involvement.” Rosenblatt added, “They are about both the fans and their community. We feel our company culture and core values at Jet Linx are a reflection of that.”