Three-time NASCAR Champion and Hall of Fame inductee Darrell Waltrip along with his legendary brother, NASCAR commentator and team owner Michael Waltrip, founded the Waltrip Brothers Charity Championship (WBCC) in 2010 – and this year, Jet Linx Nashville got in the game. Through the work of WBCC over the last seven years, $3,000,000 has been raised to support multiple charities. 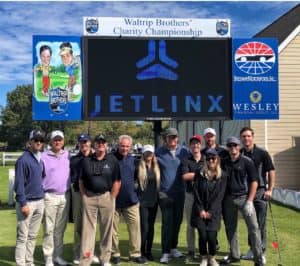 The inaugural year, the Waltrip’s envisioned a small gathering with a few close friends for dinner and a game of golf benefiting Motor Racing Outreach (MRO), a non-profit organization founded in 1988 by NASCAR drivers and their wives in response to the need for a “church” within the NASCAR circuit and community. “When we first launched the WBCC, Michael and I wanted to positively impact our community, but we never expected this event to grow so exponentially and to become such a popular fundraiser across the NASCAR, sports and entertainment worlds,” Darrell Waltrip stated.

The Waltrip brothers live out their faith in tangible ways by annually raising hundreds of thousands of dollars for multiple charities. MRO was established to serve the Monster Energy NASCAR Cup Series racing community. As requests for their services increased, MRO evolved into other forms of motor sports like stock car, motorcycle and powerboat racing. The demands racing places on families, officials, crew members, media and many others within the race community can be overwhelming and stressful. MRO provides a ministry support system offering stability and wholesomeness to those in the racing communities who can in turn, become role models to the millions of motor sports fans around the world.

“Motor Racing Outreach is near and dear to my heart and was sort of the base for why we wanted to start this. We wanted to raise some funds for the ministry, and along the way we’ve added others in like Feed the Children,” Darrell explained. Michael added, “We’re just so thankful for the ministry that caters to the motor sports community. We love telling stories and sharing the positive influence that MRO has had on so many people’s lives.”

The 8th Annual WBCC kicked off on October 18, 2017 in historic Franklin, Tennessee with a Champion’s Dinner and silent auction at The Factory and the Charity Championship teed off October 19, 2017 at the Vanderbilt Legends Club. The two-day event raised more than $575,000 benefitting three primary beneficiaries (MRO, The Journey Home Project, Speedway Children’s Charities (SCC)) and three minor beneficiaries (The Dog Knowledge (TDK) Service Dog Foundation, Hope for Warriors and Feed the Children). 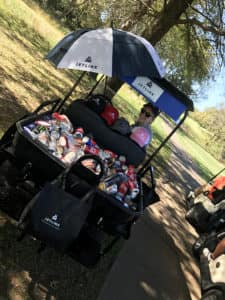 “The Waltrip Brothers Charity Championship is a great event,” Michael said. “We’ve had some amazing stars perform over the years, and hundreds of amazing people have come together to give thousands of dollars to some wonderful charities. The NASCAR community really rallies around Darrell and me, and I’m so thankful to everyone who helps make our event so special.”

Jet Linx Nashville was honored to sponsor and participate in the star studded fundraising event. “The WBCC is a great fit for Jet Linx in that we are able to support the charities of Darrell Waltrip who is a legendary Hall of Fame racer, a beloved figure in Nashville and a big-hearted guy who helps people in need,” stated Trey Sutter, Jet Linx Nashville Base Partner.

That Thursday, 144 golfers, including a team from Jet Linx, took to the prestigious links at the Vanderbilt Legends Club for the Charity Championship. The Jet Linx golf team finished with an impressive second place tie. “The golf event was a blast and our Jet Linx team carded a strong 15 under scramble score (no mulligans),” Sutter shared.

Since 2014, donors who attend the Champion’s Dinner have witnessed an incredibly moving moment when two service dogs trained by TDK Service Foundation Inc. are awarded to deserving individuals to assist them in their daily lives.

From a military family himself, Colley said, “It is the best part of the WBCC for me personally. At that moment, the true stars in the room are the two puppies ready to make life better for their new owners. It feels great to give back to those military families.” 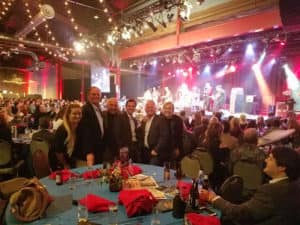 Sutter agreed, adding, “I have been involved in many charity events, but none more heartwarming than the WBCC – especially its support of veterans by providing life changing specially trained service dogs. To see the happiness and gratefulness of the recipients and their families when these beautiful puppies and dogs are given is a special experience for everyone in the room.”

The Journey Home Project, an organization connecting donors to reputable and useful veterans’ organizations, brings awareness and support to those who are part of a soldier’s journey home. Charlie Daniels, a country music icon and passionate vocal supporter of veterans’ causes, is the charity’s founder and serves as Chairman of the Board, lending his celebrity status and musical talents to numerous fundraising events around the globe. “We were honored to be entertaining at the Waltrip Brothers event again this year, to lend a hand in supporting all the great work they do,” Daniels said. “Besides that, it’s a lot of fun.”

“Charlie Daniels is an inspiration to all who know him,” Darrell said. “His tireless work in the music business, at the young age of 80, is second to none. However, perhaps more important to his fans and me is the fact he is not afraid to stand up for what he believes in. Whether politics or his charity work, you always know where Charlie stands. He’s a great American and a Country Music Hall of Famer, and I’m so proud to have his support for our event.”

Over the last seven years, WBCC has boasted support from Shaquille O’Neal, Evander Holyfield, Eddie George, and many top names in NASCAR and country music. “When you give, you receive even more, and the WBCC is a perfect example of that,” Michael stated with gratitude. “I say this every year, but the 2017 WBCC event was our best ever. Great music, great golf and a lot of money raised for great causes near and dear to Darrell and my hearts.”