Previously, Jet Linx St. Louis conducted all operations out of the private terminal at St. Louis Lambert International Airport (KSTL). This second office, although smaller than the Lambert facility, still offers a members-only gathering place for clients flying to or from Spirit of St. Louis. 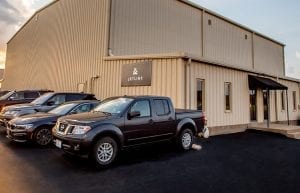 “The primary reason for establishing a second facility was the need for more hangar space for our managed aircraft. At Lambert Airport, there isn’t room to expand,” explained Jet Linx St. Louis Base President Rich Ropp. “That location is on the site of a former military installation, so building a new hangar would have required an extensive amount of capital. We also saw value in establishing a footprint in a different market within St. Louis. At Spirit of St. Louis, we have direct access to the ramp and to a storage hangar with space for a midsize jet.”

Less than 15 minutes from the primary financial district, the Spirit of St. Louis Airport caters to general aviation and private aviation only. Compared to the larger and busier airport at Lambert, the private terminal at KSUS is tailor-made for private flyers.

The second Jet Linx location in St. Louis reaffirms the company’s commitment to delivering the best customer service. “We are where our clients are. In St. Louis, that meant adding a second location even more convenient to private travelers,” Ropp continued. Like the location at Lambert, Jet Linx private jet program members and aircraft owners receive five-star customer service. Their local team is available on-site for departures and arrivals to handhold the travel experience.

Stop by the new space at Spirit to take flight with Jet Linx St. Louis!

← It Takes a Team Of Art and Architecture →