;
Home » Community Involvement » Jet Linx & The Tutu Project Celebrate Record-Breaking Fifth Year of Partnership for Breast Cancer Awareness
While Jet Linx is known for our industry-best Jet Card and Aircraft Management programs, a predominant part of the culture at Jet Linx is community involvement – whether nationally or at a local Base level. This past October, Jet Linx and The Tutu Project, a nonprofit that provides financial and emotional support to breast cancer patients, celebrated five years of partnership with a record-breaking fundraising effort, raising over $90,000 for breast cancer patient support.

The Tutu Project, founded by Bob and Linda Carey in 2003, is an organization dedicated to providing financial assistance for expenses not covered by insurance and promoting awareness for breast cancer patients and their loved ones. After Linda was diagnosed with breast cancer in 2002, Bob began taking photos of himself wearing only a pink tutu in public places to put a smile on Linda’s face. His playful and creative solution to providing support during difficult times quickly went viral, inspiring Bob and Linda to establish The Tutu Project.

Jet Linx has supported The Tutu Project since 2015. Each year, the company issues the #Dare2Tutu challenge with donation match, and partners with the foundation in other ways to raise awareness and funds, including the creation of a limited-edition, jet-themed photo featuring Project founder Bob Carey alongside a Jet Linx aircraft. The photo is available throughout the month of October for silent auction at all Jet Linx Base locations nationwide.

This year, Jet Linx introduced the Traveling Tutu, an engaging and inspiring initiative to raise funds for breast cancer patients and their families. The company sent more than 2,200 Traveling Tutus direct to its members and owners to encourage participation in the #Dare2Tutu campaign. Jet Linx then donated $20 for each photo submitted by clients using the Traveling Tutu, as well as for photos taken at any of its 18 Base locations nationwide featuring the iconic pink tutu and #Dare2Tutu hashtag. 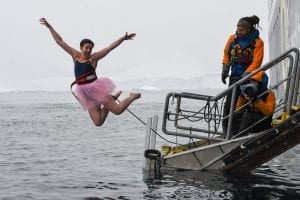 In five years, Jet Linx has raised over $180,000 for The Tutu Project’s #Dare2Tutu campaign, serving as the organization’s single-largest corporate sponsor in both 2018 and 2019. The combined efforts of the Traveling Tutu and team photo submissions in 2019 propelled the partnership to new heights, with a 124% increase in images submitted year over year. Through additional story-sharing and awareness initiatives, the company also saw a 50% increase in direct donations over 2018, bringing the 2019 grand total to over $90,090 raised for breast cancer patients and their families facing the disease.

“We greatly appreciate the dedication and continued support that we receive from Jet Linx,” said Linda Carey, Co-Founder of The Tutu Project & President of the Carey Foundation. “This year marks the fifth year of our partnership. This long-term relationship is truly a testament of their commitment to the breast cancer community.”

“It’s amazing to see firsthand what can happen when a community comes together in such a unique and uplifting way to support and empower those diagnosed with and affected by breast cancer,” said Jamie Walker, President & CEO of Jet Linx. “This cause resonates with our company’s ethos and is a reflection of the values and relationships on which we build our business. We are honored and proud to be part of a charity that is truly personal in how they help individuals, and are humbled by the support of our clients and friends that propelled us well past the 90,000 mark in dollars raised in our fifth year of this campaign.”

For more information on Jet Linx’s charitable partnership and details on how to donate, please visit https://bit.ly/jetlinxtutu. Click here to view our 2019 album of #Dare2Tutu images.