There’s a crisp feeling in the air, a sense of electric excitement growing – it can only mean that football season is underway! Missy Kemp, Jet Linx Aviation Client Services and Training Manager, shows how Jet Linx can help you enjoy every moment of the game, from the coin toss to the last touchdown. 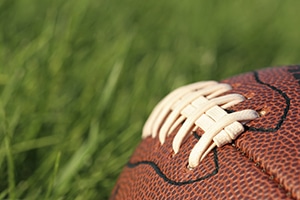 Jet Linx makes a special effort to help clients enjoy gameday travel. “We want to make it fun for you. The sole purpose of a trip to see a football game is to enjoy yourself, and you can’t say that about every trip,” she said. Jet Linx Bases will help kickoff gameday trips with a high energy and exciting atmosphere in the private terminal. “You can even have your tailgate at our terminal before you take off,” Kemp continued. “For example, many Jet Linx locations will have bloody Mary bars on game days, with vodka, bloody Mary mix and whatever garnish you can think to put in your drink.”

In addition to drinks before takeoff, Jet Linx can provide special snacks or drinks for your in-flight catering. “It’s not uncommon for someone to get a bunch of friends together to go to the game,” Kemp explained. “We want to make sure you have enough food and beverages for the trip.” Your favorite beer, finger sandwiches and snacks can all be waiting for you when you board the aircraft. Other efforts to help you enjoy your trip include special decorations at the hangar, or even on the airplane: “If we know what game you’re going to and what team you’re in favor of, we want to make it a fun event and we can decorate the plane or the facility,” she said.

Kemp fondly remembers a special time when the Huskers were playing an important game in Indianapolis. “We had six planes from Omaha going to Indy to watch this game,” she recalled. The Jet Linx Omaha team decorated the lobby with all the red and white they could, and also invited Jet Linx Indy to get in on the action. “We shipped Indy a ridiculous amount of Husker swag,” she said. “So when they got off their planes in Indy, it was all-Husker, everywhere. We had tailgating games, hats, necklaces, rugs, and whatever else we could think of.”

Flying with Jet Linx can mean less time traveling on the ground because you can fly to an airport closer to your destination, Kemp said. “It’s as simple as the fact that if you’re going to a game in Lincoln, you can land in Lincoln and not in Omaha,” she explained. “Flying commercially, you’re very limited in what airports you can utilize.” Landing closer to the game means less time driving and more time to enjoy the game.

Certain travel arrangements related to football games require a little extra consideration. Travel from the airport to the game can be challenging. Congestion near the stadium for professional games and important college matches can mean certain service restrictions for ground transportation. “Car and driver services usually won’t drop you off at the actual field; they have to go to a location nearby,” Kemp advised. Car and driver services will designate a meeting place away from the stadium for drop off and pick up times. If you prefer to rent a car, you would be able to park where you wish, but traffic out of the game and back to the airport could make leaving for an evening departure impossible. Getting to the airport late could mean having to wait to depart until the next day, because crew duty times could mean that the crew would have to rest before flying again. “We typically don’t recommend a day trip if you’re going to a game, due to considerations like getting to and from the sporting event and in and out of the stadium,” Kemp said. Traffic congestion in an unfamiliar city is nobody’s favorite, but if it’s exacerbated by traffic going to or leaving a game, it can be close to impossible to navigate.

Luckily, air traffic at the airport is usually much less congested. “Getting in and out of airports isn’t usually an issue for a regular game,” Kemp said. Special considerations may be made for conference games, playoffs, important rivalries or championship games, but your regular season game probably won’t be affected by special requirements. Some exceptions exist, including games at Penn State. “Pretty much all their traffic on game days is people going to the game, so things like rental cars go quickly. If you want a rental car, especially in a college city, you’ll need to get your request to us as quickly as possible as they do sell out quickly. And if you’re using a car and driver, you still have to consider if it will work to get you to the stadium.”

Regardless of your team colors, Jet Linx shares your team spirit and wants to make your game day trip a special experience. “We love doing it,” Kemp said with a smile.