Recently, the Jet Linx National Operations Center had the opportunity to host a special luncheon to celebrate the Jet Linx family’s dedication to The Tutu Project and to recognize the work of Bob and Linda Carey – the dynamic duo behind the movement.

Jet Linx has partnered with the organization and their #Dare2Tutu campaign in October for the past five years. The Jet Linx team was thrilled to join Bob and Linda in kicking off a big weekend of patient-support in Omaha with the event, and to present them with a surprise donation of $1,000 to help fund their new grant program. Read more about the organization’s new program and their time in Omaha below! 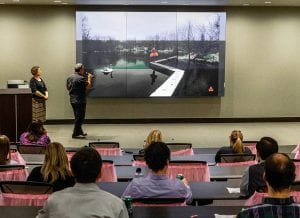 Bob Carey shares the story behind some of his favorite tutu shots with the team at the Jet Linx National Operations Center.

The Tutu Project, a breast cancer nonprofit that raises funds for breast cancer patients, is pleased to announce the launch of its pilot grant program to provide financial assistance directly to individuals and families currently fighting breast cancer. The Tutu Project, which has previously provided grants only through its charitable partners, awarded its first direct grants in Omaha, Nebraska, celebrating the occasion with a series of events across the city. The announcement was made by Bob Carey, co-founder of The Tutu Project.

“When we first founded The Tutu Project, my wife, Linda, and I wanted to help those affected by breast cancer with the everyday things that can become unaffordable or unmanageable, from paying monthly bills to keeping the house clean,” said Mr. Carey. “We would not be able to help others and provide these life-changing grants without the support of our longtime partner, Jet Linx. The company is based in Omaha and has been one of our most influential supporters over the past five years, which is why we wanted to kick off this new grant program here and express our sincere appreciation for Jet Linx’s dedication to our mission and the breast cancer community.”

The Tutu Project and Jet Linx, the Omaha-based private jet management and Jet Card membership company, celebrated five years of partnership in October 2019. To date, Jet Linx has raised over $180,000 for The Tutu Project’s #Dare2Tutu campaign, serving as the organization’s single-largest corporate sponsor in both 2018 and 2019. Omaha was the first activation in The Tutu Project’s pilot program for direct patient assistance grants.

The Tutu Project’s new grants, each of which are $1,000, provide breast cancer patients with financial support for non-medical expenses such as mortgage payments, utility bills, car payments, house cleaning services or transportation to and from treatments. 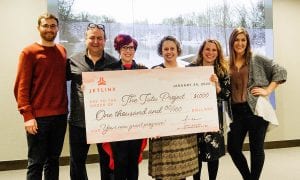 Bob and Linda Carey were presented with a surprise donation from the Jet Linx team to help fund The Tutu Project’s new grant program.

“It is incredibly rewarding to know that our partnership with The Tutu Project truly helps the women, men and families struggling with the financial burdens caused by breast cancer,” said Jamie Walker, President & CEO of Jet Linx. “To watch The Tutu Project continue to grow and give back to others is truly inspiring. We are proud to be part of a charity that is so dedicated to supporting individuals and families facing breast cancer, and we were honored to help them kickoff their new grant program in Omaha.”

The Tutu Project’s extended weekend in Omaha began with a luncheon at Jet Linx. During the lunch, Jet Linx surprised Bob and Linda with an additional donation of $1,000 to their pilot grant program, and the Careys unveiled their new book of Tutu Project photography, Tutu. Other activations included a radio interview with Jim Rose of NewsRadio 1110 KFAB, participation in the halftime free throw contest at the University of Nebraska men’s basketball game vs. Perdue on Saturday, January 25, and an appearance at the annual Creighton University men’s basketball “Pink Out” game against Xavier University on Sunday, January 26, which aims to raise awareness and money in the fight against cancer. Mr. and Mrs. Carey also visited CHI Health, where they awarded a single mother of four children, who is currently in treatment for stage three breast cancer, the first $1,000 assistance grant. The Tutu Project is also working with Nebraska Medicine to pay the medical bills of two cancer patients and donated $1,000 to The Hope Lodge.

For more information on The Tutu Project, please visit www.thetutuproject.com.