Last fall, artist Nir Hod opened his studio loft to guests of Jet Linx New York for an intimate gourmet dinner and an opportunity to view works from his collection “The Life We Left Behind.”

The Art of Nir Hod

New York-based Israeli artist Nir Hod is a man of many artistic endeavors. He has written poetry and worked as a photographer, videographer, musician, and sculptor – but he is most renowned as a painter.

After studying at Bezalel Academy in Jerusalem and Cooper Union in New York, Hod began painting Pop-inspired flowers, self-portraits that embraced androgyny, and hyper-realistic-but-surreal paintings inspired by historic photographs. His work has been the subject of exhibitions for over two decades, including a survey exhibition at the Tel Aviv Museum of Art and solo shows at the Jack Shainman in New York, Alon Segev Gallery in Tel Aviv and the Michael Fuchs Gallery in Berlin.

Hod is most well-known for his hyper-realist portraits, oil paintings that were equivalents to the Golden Age of Dutch still life painting. His past exhibitions have featured portraits of smirking toddlers with smoldering cigarettes in hand, flowers engulfed in flame, and a haloed woman carrying a handbag – inspired by an iconic image from the Nazi roundup of the Warsaw Ghetto. Throughout all of his works, Hod has deployed painting techniques handed down hundreds of years from old masters. In them, Hod has explored the paradox of beauty and horror, of repulsion and attraction. His canvases have transformed in look and feel over time, but the exploration of paradoxes like surface and substance, polish and patina, drive his work and push it forward. 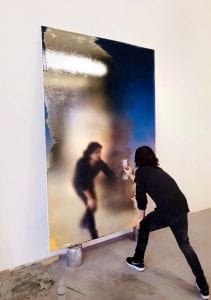 The technique Hod uses to create his masterpieces is one used by very few in the art industry.

“The Life We Left Behind”

Hod’s newest collection of paintings, “The Life We Left Behind,” explore similar themes but in a strikingly different fashion. The non-representational paintings begin with a base layer of traditional oils and then a layer of chrome pigments are added. What results is a mesmerizing patina akin to a baroque mirror or an ancient fresco. The paintings look like they have been left outside for a long time and exposed to the elements, giving them a weathered finish. The deterioration of paint is often seen as a threat to a masterpiece, yet this is a method that Hod uses to amplify his art. In their final form, the paintings allow a viewer to enter the portrait through a reflective chromed surface.

Early on in the process of creating his newest series, Hod was disappointed when he thought he had accidentally destroyed a chromed canvas. “Just a few days before a show, I damaged the layer of chrome, and when I tried to fix it, it became worse. I thought that I had destroyed the canvas, but the next day, I found that it was much better! I loved the process; it was accidental. I didn’t even think about anything, my talent just led me there. I think that is how an artist takes their work to the next level. Their talent guides them through accidents and the results are sometimes beautiful.”

The process to produce the paintings took two years to complete. Chance reactions between chrome, solvents, and an array of industrial tools used to remove the top layer of chrome reveal a colorful underpainting.

“I have always liked the element of craft, and I think we’re losing it. To make these paintings, it takes a lot of technical skill and it is very expensive. So, I enjoy the difficulty of the technique it takes to create,” Hod explained. “But since I was young, I have also liked reflections and I pay attention to how lighting works. The chrome adds a special effect that you can’t find elsewhere.” 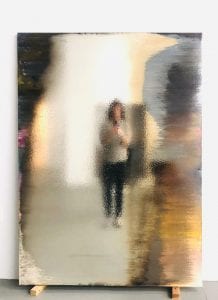 The Life We Left Behind is a captivating formula for fine-art painting… innovative from a technical angle, conceptually stimulating and pleasing to the eye.

When the oil paint is dry, it is taken to another studio where the chrome is applied, a process where at least five people are needed to produce one chromed canvas. At first, the chrome appears like black paint, but it slowly turns into a mirror effect. “It’s like magic, even for me. The whole process takes between seven to nine days,” Hod explained.

Once the chrome is applied, Hod uses a few methods to expose the oil paint underneath. Applying extreme air pressure is one way. “That makes the surface look like an old patina on a building. I like it because I can control, like, 60 percent of it. I can also throw ammonia or water at the canvas, or drag it up and down the road next to my studio. It creates a violence that feels human. I like the relationship between destruction and beauty.”

The paintings are a striking cross between masterful technique and pure chance. The oil beneath the chrome is purposeful, but the artificial treatment is a result of chance. The beauty is created randomly, and the paintings begin to blur the lines between abstraction and representation. “I think some of the paintings are realistic – like parts of a landscape reflected on a window or a billboard destroyed by the rays of the sun,” Hod pointed out.

“The Life We Left Behind” is dreamlike and abstracted, but a solid commentary on our daily lives, bringing up themes of narcissism, vanity, and identity. “We live in a time when images are accessible without limits – thanks to smartphones, the whole world is in our hand,” Hod elaborated. “In addition, people are obsessed with themselves. Wherever we go, we have to take a smiling selfie of ourselves. When people stand in front of my paintings, they see themselves as a work of art. It’s a little Dorian Gray in an interesting, spooky, and metaphorical way.”

A viewer can only see a blurry version of themselves in Hod’s work. It’s a unique experience to view in person, one that friends of Jet Linx New York experienced first hand at an exclusive dinner. 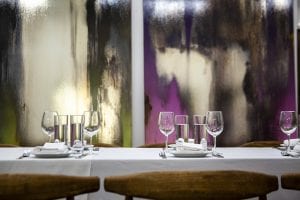 An evening of fine dining in Hod’s studio was presented by L’estudio, a catering company that specializes in off-site events for high-end clients.

“We realize that our Jet Linx community in New York has an affinity for fine dining and fine art. We sought a way to create connectivity between users of both. However, we knew we didn’t want to be a sponsor a big, splashy event,” said Isaac Flanagan, Jet Linx New York Base Partner and President. “We thought the best way to reinforce our core value of community was to create an intimate, memorable moment around contemporary art.”

The evening was made possible through a Jet Linx connection to art advisor Elizabeth Margulies, who has collaborated with Hod in the past. Over the course of the evening, guests enjoyed a sumptuous meal prepared by L’estudio catering. Dinner and wine were served over a long table in the center of Hod’s studio. As guests ate and conversed, they were able to take in the surrounding artwork.

“I would imagine as an artist that your studio is a personal space, so for Nir to allow guests inside is a consequential decision. We were grateful he shared his time, space, and talent with us. He spoke to us as a group to explain his process, but also made time to speak to us individually,” Flanagan recounted.

Hod was thrilled to see his studio used as a dining and entertaining area, “The evening was extremely special. I have never had such a well-thought-out event like this in my studio. I work all day in that space, it was a unique experience for me to see it being used for a different function. To eat at a long table in my studio was so strange and fun.” 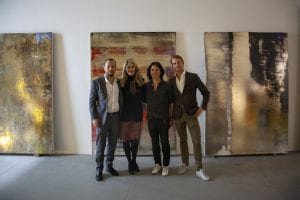 Hod has multiple exciting exhibitions in 2020. He will open an exhibit featuring his latest collection on Feb. 1 at the Sara Hilden Museum in Tampere, Finland, and will be featured at the Kohn Gallery in Los Angeles in March. His work called “Mother” is on display at the Jewish Museum in New York.

For a Five-Star experience, be sure to visit these galleries by booking a trip with your local Jet Linx team! Click here to get in touch.