Taking Off on Tour: Jimmy Walker

“Jimmy and I share many mutual friends through the Clubs of Cordillera Ranch, and we play together when we can.” While Northington remains mum on the results from the course, he pointed out with a grin, “he owes me $400 from fantasy football last year. 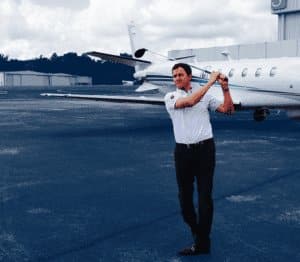 Northington introduced Walker to Jet Linx because “his need for travel from tournament to tournament was a perfect fit for our business.” The on demand, personal nature of Jet Linx’s private jet service plus a private, local terminal in Walker’s hometown makes travel convenient, comfortable and specifically catered to the needs of Walker and his family.

“Whenever we need anything, the team at Jet Linx San Antonio is only a call or a text away,” remarked Walker. “They really roll out the red carpet for us when we pack up the clubs and head to the next event.”

This season on the PGA tour, Jimmy Walker has been nothing less than a shooting star. With three wins under his belt (a feat only matched by Rory McIlroy this year), 35 weeks atop the FedEx Cup leaderboard and a spot on the United States Ryder Cup team, Walker has risen to the top of the circuit and made a name for himself as a golfer to watch.

Prior to this season, Walker enjoyed a modicum of success since turning pro in 2001. After starting 0-for-187 on the PGA Tour, last year he finished the season with several fourth, third and second place accolades. He knew better days were ahead. This year, “my expectations are higher,” Walker said. “I feel like I should be there. I think that’s one of the biggest factors this season – getting used to seeing your name on the leaderboard. I’ve come to enjoy that fact and relish it. That’s why I’m out here, to be up there and try to be at the top and try to win.”

The results speak for themselves. This year in major championships alone, Walker leapt from the shadows of the cut and the DNP (did not play) to noteworthy finishes at all four events, including three top-10 finishes; T-26 at The Open Championship, T9 at the U.S. Open, T8 at the Masters Tournament and T7 at the  PGA Championship.

The competitive side of Walker is easy to spot. In conversation, his candor gains more than just a hint of determination when he describes his introduction to the sport by his father, a scratch golfer. “My dad was really good, and I thought to myself – if I could beat him, I might just be pretty good too.” When that day came, his aspirations for the PGA were born. 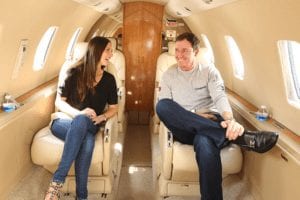 Following a childhood and adolescence filled with traditional team endeavors like baseball, soccer and basketball, golf offered a new and very personal challenge. “I’m driven by the individual nature of the sport,” he noted. “Both your failure and your success rest on your shoulders.”

This year, the successes have kept on coming. Walker points to his win at the Sony Open in Hawaii as a favorite highlight from 2014. “Erin and the boys were there, which made it really special. There was this great feeling that we were all on this journey together.” Though for certain, there are different priorities for the kids.

“My son can’t get enough of the blimp. When we talk about a tournament, the first question is always, ‘Will the blimp be there?’ There is actually a bit of disappointment if we are just playing for fun. No blimp,” Walker noted with a laugh.

Walker’s family is an integral part of his tour experience – something his recent success hasn’t changed. He met his wife, Erin, at a Web.com tour event in 2004. “We travel together, as a family, as much as we can,” he said. When not traveling with Jet Linx, the Walker family sets up shop in a spacious RV with familiar walls and trusted toys that “give the kids a sense of home.”

Walker’s lifelong interest in golf plays on themes of precision and solitude. His passion off the course plays upon the same notes- chronicling the deep recesses of space through astroimaging. 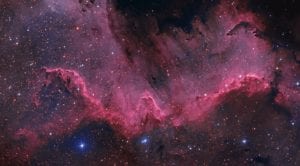 “Astrophotography for me represents everything I enjoy in life. I love being outside. I enjoy the technical aspects of setting up the equipment and taking such detailed images. Astrophotography also indulges my artistic side – putting the pictures together and adding my personal touch, pouring thought into each final product,” Walker said.

The tone of his voice immediately picks up when you mention his photos and NASA. His photo of the Iris Nebula, otherwise known as NGC 7023, was selected as NASA’s astronomy picture of the day in August this year.

“There is no greater stamp of approval than to have NASA take note of your work,” he beams. “Getting the ‘Picture of the Day’ nod from them… that is really the holy grail for someone dabbling in astroimaging.”

Walker has been imaging for about three years, and now uses an arsenal of gear at a dedicated observatory in New Mexico. This remote setup allows him to collect and process data, even while he’s on tour. The competitive drive so evident in his career carries clearly to his hobby.

“Golf is my job and I continue to try to get better and better each year. I try to take that mindset into imaging,” he explained. “I’m competitive and I try to be really good at it. I work hard, and I practice hard. It’s my whole upbringing—being competitive and wanting to be the best.”

With the Ryder Cup on the horizon and his personal drive to be the best, Walker looks ready to reach a higher altitude. “We’ll be there every step of the way,” said Northington. “Jimmy is a special guy, a gifted golfer, and a friend to everyone at Jet Linx.”

This article originally appeared in the Summer 2014 issue of SOAR.