Through volunteering, strategic support and a fresh branding direction in the fall of 2021, Jet Linx provided lift to Aviation STEMaha, a youth-focused STEM and aviation organization in Omaha.

Through her involvement on the board of the Burke Air and Space Program (BASA), Dee Ruleaux, Director of Recruiting and Industry Partnerships at Jet Linx, received an invitation to join the board of Aviation STEMaha – an organization that is currently growing and rebranding from a previous entity, Aviation STEM Day Omaha.

Despite slight differences in name and mission, the goal of Aviation STEMaha remains the same – getting young people in Omaha, Nebraska, interested in STEM (science, technology, engineering and math) and aviation careers – and that includes anything from design to mechanics to studying the weather. The effort began in 2018 when Jim Beyer, current President of Aviation STEMaha, organized a fly-in event for youth interested in aviation. This one day event proved successful, but Beyer noticed that the impact diminished following the single event.

“The event itself all took place in a single day, and our team noticed that kids would have a great time and show interest, but then they would go home. Summer vacation and all the other distractions would happen, and our impact tended to fade. This is why Aviation STEM Day Omaha has transitioned into Aviation STEMaha, which will include more consistent programming and outreach to youth,” Beyer explained. 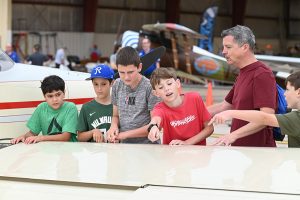 Beyer, an Air Force veteran, and current airline pilot, began investigating youth airplane builds in his spare time while stationed in Afghanistan from 2014 to 2015. Through online forums, he learned how these projects were being managed, and he sought to bring a program to his son’s high school in Bellevue, Nebraska. Budget issues stalled the project, and he was then directed to BASA, where he assisted with their youth airplane build. From there, Beyer accepted a role on the BASA board, where he first met Ruleaux.

“We thought we could form a powerful partnership with Beyer’s group, similar to what Jet Linx has accomplished with BASA – through rebranding and strategic planning,” said Ruleaux.

With help from Jordan Maddex-Kopp, Vice President of Marketing and Strategic Partnerships at Jet Linx, a rebranding began with the new year-round mission in mind. Maddex-Kopp presented the plan to Beyer and the transition to Aviation STEMaha began in the summer of 2021. “The focus of the board is now transitioning from a one-day event to a year-round endeavor under the new brand,” Ruleaux said.

The culmination of Ruleaux’s newly-formed partnership came to fruition at the third annual Aviation STEM Day Omaha in September 2021. The event took place at the Millard Airport in Omaha, with Jet Linx as a sponsor. The day included hands-on activities, a drone competition, experimental and warbird aircraft on display, and dozens of local organizations on-site to share their fascination with all things aviation. The Omaha Police Bomb Squad performed a demonstration, and a Medevac helicopter did several takeoffs and landings – a major hit for event guests. During the event, messaging explained that Aviation STEM Day Omaha would be shifting gears to more regular programming through the newly-formed Aviation STEMaha entity.

“The turnout for the event was great this year, and we felt hopeful for Aviation STEMaha’s future because of the rebranding and transition to a year-round program. Another encouraging thing to see was the wide range of ages in attendance, and the broad range of exhibitors and participants. It was a very well-executed event that will provide us with a lot of momentum moving forward,” Ruleaux said.

With Aviation STEMaha’s goal of connecting youth to aviation and STEM education resources and opportunities, Beyer knew that a physical space would be necessary to bring people together. He used his connections as a member of the Experimental Aircraft Association Chapter 80 (EAA80) to find a retail space where local youth can construct aircraft and where other local aviation-related organizations can collaborate.

EAA80 is an IRS 501(c)3 not-for-profit, with a goal of expanding the scope, value, and utility of general aviation, especially to the youth in the Greater Omaha community – a great compliment to the mission of Aviation STEMaha. The organization also awards scholarships to students seeking to enter flight school, in addition to offering “Young Eagle Flights” – free flights for youth interested in aviation. The local EAA80 chapter flies up to 175 Young Eagles every year. 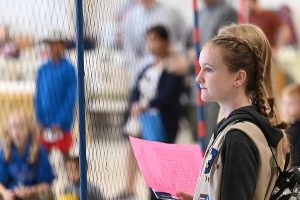 Bruce Mundie, current President of the EAA80 Chapter and retired Air Force Colonel, previously met Beyer while serving overseas in Afghanistan, and helped secure a space for EAA80 members to gather, as well as local aviation clubs to commune. “Our EAA Chapter had long-term goals to purchase hangar space. We were recently donated a partially-built aircraft, along with an engine, and we planned to build, sell, and use the profit for a down payment on a hangar space – but we needed a space to build the plane first. That’s when we came upon an agreement to rent a non-traditional retail space at the Oakview Mall in Omaha, and the ABLE ACE center was created in August 2021,” Mundie explained.

ABLE ACE stands for “Aircraft Building Laboratory and Aviation Center of Education” – and is a 4,000+ square-foot, well-lit, climate-controlled space dedicated to supporting aviation education activities. While the space will be funded and maintained by members of the local EAA80, other aviation groups, like Aviation STEMaha, will be able to use the space for projects, meetings and educational events. “We want to welcome all other aviation-minded organizations to use this space,” Mundie affirmed.

The Aircraft Building Laboratory portion of ABLE ACE is already underway, with experienced EAA members, along with local high school and college students, building a Zenith 750 light-sport aircraft – a full-scale, two-person aircraft. With this project, all groups involved hope to enlighten and motivate the student members to pursue a career in aviation.

“Having a dedicated and aviation-themed space to conduct activities and interact with youth will undoubtedly help Aviation STEMaha and local organizations connect with our community and share aviation and STEM,” Beyer explained.