After years of thinking about it, you’re ready to finally purchase your own private jet. Now what? Do you buy a new or a pre-owned aircraft? Explore your options for acquiring the latest model aircraft – or one a few years old – with the experts at Jet Linx. 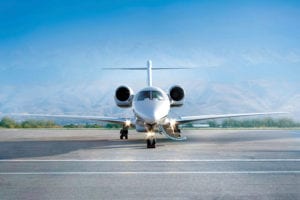 Seeing a new aircraft in the hangar can feel a lot like buying the newest car on the lot, but is the decision to buy a new or pre-owned aircraft really that similar to purchasing a car? “If you want to compare it to a car, it’s a very similar type of thought process,” said Ray Bennett, Jet Linx Aviation Vice President of Sales.

“With a new aircraft, it will have zero time on the engines, that new aircraft smell, warranty packages and established maintenance programs. All those great things also come with a commensurate purchase price from the manufacturer,” Bennett said. If you’re an experienced aircraft purchaser, you may want to double check the incentives offered by the aircraft manufacturer for a new aircraft, as some may have changed since your last purchase. “The manufacturers used to offer their own internal financing, but they can’t be as aggressive as some of the institutions out there so a lot of them have discontinued financing programs,” Bennett advised. So some manufacturers have increased other incentives to persuade buyers.

“An incentive could be training for pilots or free parts for a year or a hefty discount,” Ron Smith, Jet Linx Atlanta Base President said. These incentives, along with a fresh warranty, can be a huge benefit to an aircraft buyer. “Most aircraft come with 5-year warranties. There won’t be any warranty on an older aircraft unless you buy it while it’s still in the manufacturer’s warranty period. If you buy new, you’re going to be on the front end of the warranty. Some corporations with aircraft want to buy new, keep it for five years and then sell it. They’ll take a hit on the depreciation of the aircraft, but then they won’t have to tolerate upkeep for an older model.” Some purchasers may decide the savings provided by the warranty outweigh the cost of the quicker depreciation on a newer model. “On the finance side a new aircraft is going to depreciate faster than a pre-owned one, but they last a lot longer,” Smith continued.

If you’re thinking about buying an older model aircraft, there are additional considerations at play. “On a pre-owned aircraft, it may not be under warranty or engine programs, or there may have been modifications that would actually increase the operational cost,” Jon Maxfield, Jet Linx Denver Base President, said. “If you’re buying a pre-owned aircraft at a lower price point you need to know where it’s at in its current maintenance lifecycle and see what it will need going forward,” Smith said. “In an aircraft’s life, unlike a car, there are major milestone events. That’s when you start getting into engine overhauls and major scheduled inspections, which are very expensive events. Knowing where an aircraft is at in its lifecycle is critical.”

Scheduled maintenance events are not the only costs to weigh with a pre-owned aircraft. “It’s still important to look into the maintenance history of the aircraft and see if there were any past maintenance issues,” Bennett advised. “It’s important to know who has owned it and maintained it since new,” Smith added. “If it was owned by a large corporation, they probably wouldn’t have spared any maintenance expense. If it’s been abroad or with an unknown owner, it may have a questionable pedigree.”

In addition to the aircraft’s general maintenance, it’s always important to consider the features of the aircraft you want to purchase. A new aircraft may have all of the latest gadgets and advancements on board at delivery. “We all want the latest fancy gadgets and new leather seats, but if you go with a pre-owned aircraft, you can still get those amenities added. One of the benefits of aviation is that you can take an older aircraft and update it to the latest and greatest without the expenditure of a new aircraft,” Maxfield said. “You can add new avionics and winglets or put a new interior in the aircraft or update the paint scheme,” Bennett continued. You see a lot of people updating or modifying their aircraft as opposed to stepping into a new aircraft. It’s easier to modify the aircraft, spending less to update it than you would spend on a new aircraft.”

The most important thing to remember is that regardless of what aircraft you choose, you don’t have to navigate the process alone. “Jet Linx has established relationships throughout the industry. We can help identify the right aircraft for the mission and then leverage those relationships and our expertise to assist you,” Smith said. The Jet Linx online Aircraft Marketplace (www.JetLinx.com/Marketplace) is a great example of those relationships. Prospective aircraft owners can peruse a list of available aircraft for sale, view interior and exterior pictures, see airframe times, and get a sense of the aircraft marketplace.

Once an aircraft is purchased, the partnership with Jet Linx is only beginning. Smith agreed that Jet Linx’s services are all-encompassing for a potential aircraft owner. “Unlike an aircraft broker, we’re not in it for the purchase transaction. We’re in it to manage the asset and keep it operational for many years to come. So we’d better help you get it right!”