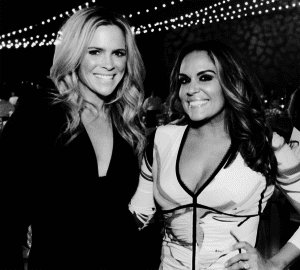 “The event had a really tropical theme this year, and kind of romantic with a Mexican-Cabo vibe,” said event co-chair Taucha Silk (pictured near right, with co-chair Blair Moffett). “We kept the décor chic, with all white decorations and lots of candles, and one of Jet Linx’s jets in the cocktail party and silent auction area. The feel was of being transported to Cabo for the night.” The event was full of special details to make the evening stand out as the area’s premier fundraiser. “Our entertainment wasn’t just a band: we had a DJ with live instruments playing over what he was playing. It’s a really cool, different kind of entertainment,” Silk explained. One surprise for guests was the after party, which was revealed in the private jet hangar after the main event. “The doors went up and it was a sleek lounge area with a bar, in all white with cozy seating,” explained event co-chair Blair Moffett. Silk has served on the event committee for six years, and Moffett has served for three years.

This was the first year for the One & Only Beach Ball to be hosted at Jet Linx Scottsdale. “It’s usually been held at the same location, so people were beyond excited,” Silk said. “We are so thankful for Jon Hulburd [Jet Linx Scottsdale Base Partner] letting us use Jet Linx and hold the event at the hangar. We’re beyond grateful because it’s going to switch the event up, and we can take it to the next level for Phoenix Children’s Hospital.” Moffett shared her co-chair’s enthusiasm, adding, “It’s just more fun for people to do it somewhere other than at another ballroom. People get more fired up about it.”

The crowd was certainly fired up: the sold-out event raised over a million dollars for the hospital. Tickets sold out early, even though prices were raised from the previous year. “I had people asking every day how to get tickets,” Silk remembered. “We were at maximum capacity.” The live auction brought out the philanthropic – and competitive – spirit in bidders, who vied for the top notch prizes. 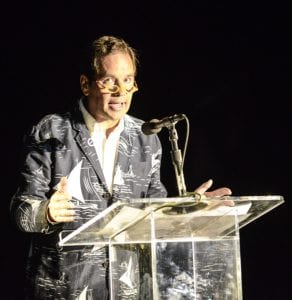 “Jon Hulburd (pictured at right) personally donated flights for the auction,” said Josh Allen, Jet Linx Scottsdale Base President. Hulburd is a longtime supporter of the hospital. “I’ve just finished a two-year stint as Chairman of the PCH Board of Directors and I’m about to begin my tenth year as a Director,” Hulburd explained. “Before that, I served on a capital campaign committee for a couple of years, raising several million dollars for a new NICU.” He has family ties to the hospital, as well. “My father-in-law, Tim Louis, was a longtime pediatric orthopedic surgeon in the valley – and one of the founders of the hospital,” he explained. Hulburd presented the Spirit of Hope award, named for his in-laws, at the event. “It is given each year at the event to an outstanding person or entity who best supports this great Phoenix institution.”

Moffett credited the event’s success to Phoenix Children’s Hospital’s wide reach in the area. “I think that everyone has a connection to the hospital,” she explained. “Either they have children and they’ve gone through something traumatic, or they know someone who’s gone through something traumatic and had to visit the emergency room.” Currently, the Phoenix Children’s Hospital’s Emergency Department and Level 1 Pediatric Trauma Center treats more than 83,000 patients per year – in a space built to support just 22,000.

“The first thing is raising awareness for the problem,” said Dr. Anthony Pickett, a pediatric trauma surgeon at PCH. “People take it for granted that emergency rooms are open 24 hours a day, seven days a week, 365 days a year, including weekends and holidays. This event raises awareness to who we are and how much we’ve grown.

“The big a-ha moment is seeing how our volumes have not plateaued, and there are more ill and critically injured children each year,” said Dr. Pickett. “We work to provide the same level of care as when we were seeing far fewer patients. Every physician, provider and nurse just puts their heads down and works to make sure we see every patient.”

Dr. Pickett completed his fellowship at Phoenix Children’s Hospital, and has been at the hospital for a total of 11 years. “I came out here to do my fellowship, looking for somewhere exciting,” he recalled. “The key excitement I found was that we were still in the smaller building and just discussing becoming a trauma center. I wanted to see the fellowship grow and saw the possibilities for growth at the hospital.” 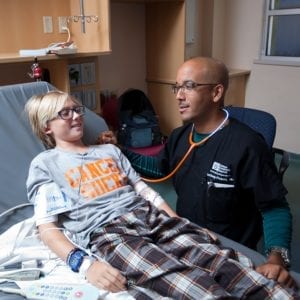 The fast pace of the emergency room keeps Dr. Pickett busy, but that’s what he prefers. “In emergency medicine, you have an immediate impact on a child,” he said. “Every day is a new day and you don’t know what you’ll face: it keeps it fresh for me.” Being able to support the level of patients coming through the hospital’s doors adds another level to the already intricate balance of emergency medicine: the need for urgency is at the utmost high. “In trauma, we have something referred to as the ‘golden hour,'” Dr. Pickett explained. “You essentially have 60 minutes to discover what’s wrong and initiate treatment: the chance for positive outcomes declines after that. If your child is at Children’s, they’ll be seen by surgeons and specialists within that time.” Phoenix Children’s Hospital is Arizona’s only Level 1 Pediatric Trauma Center, providing the highest level of care. “As a Level 1 Trauma Center, the American College of Surgeons reviews us to make sure we meet their qualifications,” Dr. Pickett said. “We are equipped to care for the most critical injuries, regardless of type of injury, without transferring a patient outside of our hospital.” Specialists and sub-specialties are all on-staff at PCH, in order to treat patients within that ‘golden hour.’ We are also held to a certain standard with regards to research, searching for the next breakthrough or treatment and always striving to be better,” Dr. Pickett said.

Dr. Pickett is grateful for the opportunity Beach Ball brings to the hospital. “You almost can’t put it into words, what the community support means to us,” he said. “We can have fundraisers, but the community partners help rally and reach more people more quickly.” The support for Phoenix Children’s Hospital goes far beyond one evening. “After the event, people realize that one day is not enough, and it keeps the momentum moving forward,” he said.

Launch the balloons and pop the champagne! Join Jet Linx in celebration of the 10th anniversary of our charity partner, The Tutu Project by The Carey Foundation. Will you
#Dare2Tutu?

Since the formation of a partnership in 2019, the Jet Linx National Operations Center (NOC) team in Omaha has been pleased to support the Burke High School Air and Space Academy (BASA) by offering direct access to exciting opportunities such as internships, mentorships and pipelines to aviation careers via Jet Linx.

Launch the balloons and pop the champagne! Join Jet Linx in celebration of the 10th anniversary of our charity partner, The Tutu Project by The Carey Foundation. Will you
#Dare2Tutu?

Since the formation of a partnership in 2019, the Jet Linx National Operations Center (NOC) team in Omaha has been pleased to support the Burke High School Air and Space Academy (BASA) by offering direct access to exciting opportunities such as internships, mentorships and pipelines to aviation careers via Jet Linx.