For years, crowds would gather at air shows across the nation to watch Hoover perform his famous aerobatic maneuvers in his Shrike Commander – killing the plane’s engine before executing a loop, a hesitation roll, and then completing this feat with a perfect landing on the runway. “Watching him fly was amazing,” recalls Jeff Puckett, Jet Linx Denver Base Partner & CEO. “There are pilots who fly today simply because of Bob Hoover.”

Hoover passed away In October, 2016 at the age of 94, but his contributions to aviation and the influence he had on others remain.

Born on January 24, 1922, Hoover learned to fly at the Nashville Berry Farm while working to pay for flying lessons. As a teenager, he enlisted in the National Guard and was quickly sent to Army pilot training. During WWII, he spent time in Casablanca testing new military aircraft for combat, and later was assigned to the 52nd Fighter Group stationed in Corsica. After flying 58 successful missions, he was shot down in France by a German pilot in 1944. Hoover then spent 16 months in a German prison camp before heroically escaping by stealing a Fw 190 fighter jet and flying it safely to Allied territory.

Following the end of WWII, Hoover was assigned to Wright Field in Ohio to test the newest military aircraft and fly enemy planes that had been captured during the war. After being honorably discharged from the Air Force in 1948, he went on to work for North American Aviation, testing the capabilities of numerous aircraft including the XFJ-2 Fury Jet and T-28 Trainer. During the Korean War, he was sent to train pilots how to dive-bomb in the F-28 Sabre and spent years training other active-duty pilots throughout the country. “He tested planes to their limits,” said Puckett. “He flew past the envelope so the people who followed him didn’t have to. He has saved pilots’ lives by doing what he did.”

In the 1960s, Hoover began flying in airshows and performing tricks in his yellow P-51 Mustang amicably named “Ole Yeller,” and later the Aero Commander’s Shrike Commander. His engine-out aerobatics in the Shrike, a twin piston-engined utility aircraft, became his most famous.

Hoover continued to perform his famous aerobatics in air shows until his retirement in 1999 at age 77. He continued his involvement in the aviation community by attending events, participating in organizations,

and continuing to encourage generations of young pilots. Hoover also received many awards and honors during his career, including the Wright Brothers Memorial Trophy and the Smithsonian’s National Air and Space Museum Trophy.

In November 2016, Hoover’s closest friends, and fellow aviators gathered at Clay Lacy Aviation in California for a celebration of his life. Puckett was among those people who gathered to remember the legend. Puckett met Hoover through the Living Legends of Aviation, an honor they have both received, and had the opportunity to get to know Hoover well on numerous occasions.

One of Puckett’s fondest memories was flying Hoover, then the age of 89, in his CJ3 to Forrest Bird’s 90th birthday party. “I was nervous. As we were landing I remember thinking to myself, I have a national treasure in my back seat. Please don’t let me mess this up.” said Puckett. “We stayed in the same cabin with some other people who were attending. Even at his age, he would outlast everyone at a party. While everyone else in the cabin went to bed, he and I sat there for hours while he told stories about WWII and all of his experiences flying. He was one of the best storytellers I’ve ever met.”

Hoover was not only well known for his aviation career, but also for his warm personality and gentlemanly demeanor, which Puckett knew to be true. “He was truly the greatest example of being the greatest example,” said Puckett. “He was the kind of guy that if you were talking with him, it was just you, there was nothing else going on in the world that was more important. Whether you were the guy cleaning the floors or Neil Armstrong, you were important.”

Without a doubt, Bob Hoover lived his life to the fullest. His passion for flying is not only shown through his years of pushing aircraft past their limit or performing in air shows, but also through the people he taught and inspired. “One of the speakers at the celebration used a famous quote that Bob would tell pilots; If you’re faced with a forced landing, fly the thing as far into the crash as possible,” recalled Jeff. “That is how Bob lived his life. He flew himself right into the crash and he was there until he no longer could be.” 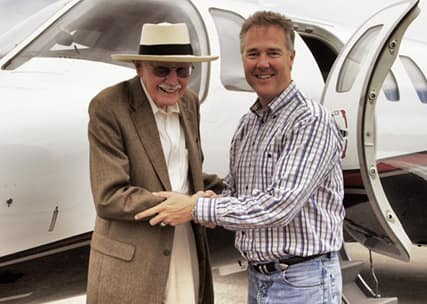 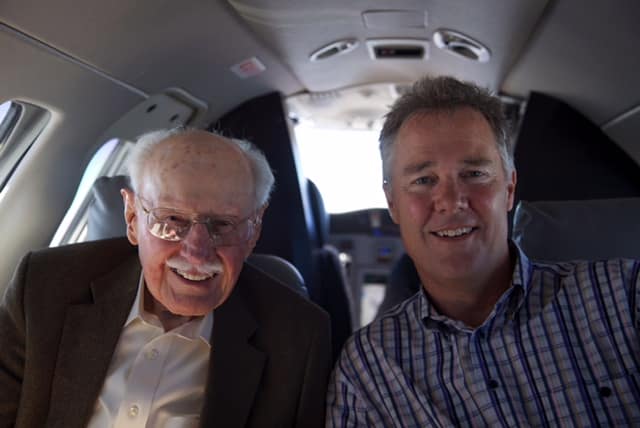