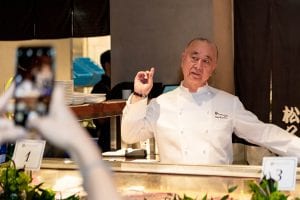 Matsuhisa in Denver’s Cherry Creek neighborhood is not your Friday night hangout, it is a destination with a tight reservation list, marked on calendars weeks in advance. Owned by internationally-acclaimed Chef Nobuyuki “Nobu” Matsuhisa, the Denver location is just one of nine Matsuhisa sushi restaurants located around the globe. Although the Rocky Mountains and sushi aren’t commonly equated, the wonders of the jet age have allowed for daily shipments of high-quality fish directly from Japan.

All in all, Chef Nobu has more than 30 restaurants in 28 countries across five continents. He has opened boutique hotels, appeared in movies, and published books. He is also in the process of making his own brand of sake, even designing the porcelain bottles himself. Despite his astonishing level of success, Chef Nobu still says, “I always put something special in my food, my heart.”

While some have called his cuisine a form of Japanese fusion, Chef Nobu has a different take. “It’s Nobu style,” he reflected. “It means that the cooking is still Japanese but with some ingredients and styles from Peru like cilantro, jalapeno peppers and ceviche.”

Jet Linx Denver treated clients and guests to a special engagement at Matsuhisa. Meet Chef Nobu at the event below! 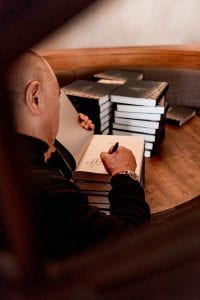 Nobu was born in 1949 in Saitama, a city near Tokyo, the youngest of four children. His father, a lumber salesman, died in a motorcycle accident when he was eight, so while his brothers and mother worked outside, Nobu was in the kitchen watching his grandmother cook. It was uncommon for men to be in the kitchen at this point, but as a young child, Nobu had really nowhere else to be. He watched his grandmother cook with ‘kokoro’ as she explained it, which is Japanese for heart, and it had a lasting impact on him and his philosophy on cooking.

When Nobu was 11, one of his older brothers took him to a sushi restaurant. At this time, around 1960, sushi was uncommon and expensive. “I recall walking through the sliding glass doors into this tiny restaurant and immediately feeling the energy of the place as the sushi chef yelled out, ‘Irasshai! Welcome!’ You know how kids dream of being soccer players or actors? Well, my dream after that was to be a sushi chef,” he reflected.

At the age of 18, after being expelled from high school, Nobu began working at Matsue Sushi in Tokyo, washing dishes and cleaning. He also followed his master to the fish market every day, holding the basket while the chef selected fish. Nobu eventually began to help clean the fish as well, and he was careful to try to remember every detail of instruction he received.

“The days were long. There were times I wondered when I would be able to move behind the counter and start making sushi,” Nobu recalled. “But whenever I got fed up, I would remember why I chose the job in the first place: I wanted to prepare sushi for customers and make them happy.” Nobu persisted for three years until a sous-chef quit and he was promoted to fill the spot.

At the age of 24, Nobu met a customer of Peruvian- Japanese descent. The customer encouraged him to open a restaurant with him in Peru. At the time, many Japanese corporations like Mitsubishi were in Peru, and along with them were Japanese businessmen eager for good sushi. In 1973, Nobu moved to Lima, Peru, and opened up a restaurant with the same name of Matsue.

For Nobu, it was a personal victory to be able to move abroad. “My father was a lumber merchant who died when I was young. Whenever I felt sad, I used to stare at a photograph of him taken on the Pacific island of Palau, where he had once traveled to buy lumber. I wanted to be like my father. Staring at the photo I knew that I too would go overseas some day.”

In Peru, Nobu was not able to find many of the Japanese ingredients he had taken for granted while working in Tokyo. The one thing that Nobu could find was fresh fish, but he had to make due with all other ingredients. Eventually, Peruvian staples such as chili oil, garlic, chili paste, lime and cilantro all made their way into his cuisine.

Nobu was happy living in Lima, but he and his business partner had disagreements about the way to run a restaurant. “I wanted to make people happy with my food. This meant buying high-quality ingredients and using only the freshest fish. But my partner was more concerned with profit – he told me to rein in food costs by buying cheaper fish. Chefs are artists, and I couldn’t be happy with my art if I was forced to use cheap ingredients,” he said. 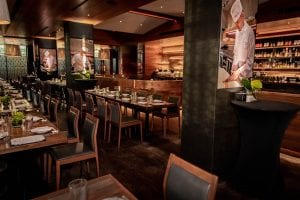 Although the restaurant in Lima lasted only a few years, it had set a blueprint for a successful culinary career. “Just as I had done during my apprentice days in Japan, I opened and cleaned the restaurant, put together the menus and made basic sauces. Back then you couldn’t jog down to the corner store to buy fish paste or other specialized Japanese ingredients, so I created everything from scratch, through trial and error. A lot of what I experimented with in Peru became part of my repertoire later on.”

Following stints in Argentina, Japan and a restaurant lost to fire in Alaska, Nobu again could not resist an offer to work at an overseas restaurant – this time a small, private sushi den in Los Angeles that only had six seats. For six and half years Nobu worked there, quietly perfecting his style, serving sashimi tacos and salmon with anticucho sauce to a small audience.

In 1987 a close friend invested $70,000 into a 38-seat space in Beverly Hills for Nobu to open up his own restaurant. He had many rich and famous clients, and word began to spread about Nobu’s peculiar Japanese-Peruvian cooking style. One day, actor Robert De Niro walked in and Nobu’s life was never quite the same. “I did not know him then because I didn’t go to the movies, but he liked my food, and invited me to come to New York to open a restaurant,” Nobu said.

At the time, Chef Nobu wasn’t ready to move to New York, he was still perfecting his food and organizing the restaurant and the brand. De Niro would frequently try to woo him into opening another restaurant, but Nobu repeatedly declined. He simply wasn’t ready. “You need patience. And good teamwork, strong leaders, good teachers and energy – not just cooking.”

It’s important to note that when Nobu met Robert De Niro, his Matsuhisa restaurant was so wildly popular that even Tom Cruise could not book a table. Yet, he still refused to budge on De Niro’s offer to open up shop in New York. It just wasn’t time yet. 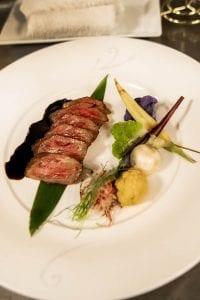 In 1994 Chef Nobu was finally happy with his Matsuhisa location in Beverly Hills, and he took De Niro’s offer, opening up Nobu New York. Nobu was just as popular and exclusive as his Beverly Hills restaurant, and tables were so hard to come by that they opened up a restaurant next door to accommodate the excess of eager customers. The location was aptly named, Nobu Next Door.

The success of Nobu in New York led to Nobu and Matsuhisa restaurants around the globe: Budapest,Dubai, Cape Town, Manila, Mexico City, Moscow, Hong  Kong, Milan, London, and more. Yet for a world famous chef, Nobu is notably humble, and attributes his success to learning after his many failures. “I am here because people gave me opportunities. Then I worked hard. When I was young, I made mistakes but that never worried me because, you know, you learn from your mistakes, so whatever’s broken, something new always comes of it.”

It’s not every day that you get to make conversation with one of the world’s most famous and successful chefs. It is even rarer to have this opportunity two times in one day, like the Jet Linx Denver team experienced earlier in February, first during a business luncheon and again at a private dinner event at Matsuhisa Denver.

A partnership between the Jet Linx Denver Base and The Denver Agency, a boutique insurance agency specializing in coverage for high net worth individuals, resulted in this once-in-a-lifetime opportunity. Katie Day, Director of Jet Card Sales in Denver, networks closely with The Denver Agency to plan business luncheons at Matsuhisa. “There’s a lot of crossover between our Jet Linx clients and The Denver Agency’s clients, so we thought bringing them together would benefit everyone,” Day shared.

The Denver Matsuhisa restaurant is the third location in Colorado. Matsuhisa Aspen opened in 1998 and was the second Matsuhisa opened after the chef’s original location in Beverly Hills. Matsuhisa Vail followed in 2011, and finally, the Denver location opened in 2016. Although Denver has a reputation for fine steak houses, Matsuhisa sushi can make any beef eater blush. Every day, fresh fish is flown in that has been sourced through special purveyors with Chef Nobu’s seal of approval.

Day and Kenji Sterr of The Denver Agency saw an opportunity for all three businesses to benefit by hosting casual networking events at Matsuhisa, inviting roughly 20 individuals at a time to the renowned sushi restaurant for monthly luncheons.

“Jet Linx and The Denver Agency are like our family. We share not only the same clientele, but also the same values: quality, thoughtfulness, and attention to detail,” said Matsuhisa Director of Catering and Events, Pete Giokas. “The idea behind these events is simple: give like-minded professionals a warm and luxurious space to enjoy each other’s company – as well as Chef Nobu’s cuisine – on a monthly basis,” Giokas stated.

Giokas knows a thing or two about Chef Nobu because he’s actually the only chef he has ever worked for. “I started as a busser on the opening staff of Nobu Los Angeles in 2008, progressing to a lead server position. From there, I was brought on the opening management team for Matsuhisa Denver,” he said. 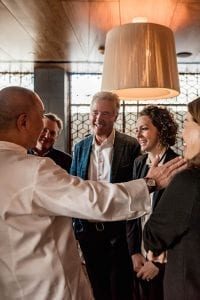 The restaurant’s design is equally as impressive as the food. When asked about Chef Nobu’s hand in the restaurant, Giokas noted, “Chef Nobu had substantial stylistic oversight of the restaurant, from the fabrications and materials, to the placement of the restaurant’s different elements – sushi bar, bar, Zen garden, and dining room – down to the very inch in some cases.” For example, Chef Nobu didn’t like the initial spacing of the sushi bar, so he had it moved four inches closer to the kitchen, allowing a better view for customers sitting at the bar. This extreme attention to detail applies to many aspects of the business, and is why Matsuhisa is so renowned – there are no shortcuts taken, ever.

On February 7, roughly 50 guests were invited by Jet Linx Denver and The Denver Agency to attend the once-in-a-lifetime lunch with Chef Nobu. Guests mingled with the chef and received an autographed copy of his recent memoir.

Later that evening, the Jet Linx Denver team returned to Matsuhisa for World of Nobu, a private event featuring a six-course meal prepared by Chef Nobu’s top chefs from his three kitchens in Colorado. Chef Phil Tanaka of Aspen prepared tuna nasturtium wraps, Chef Mune Taira of Vail prepared hamaguri with yuzu, and Chef Toru Watanabe of Denver prepared tiradito roll with assorted sushi. Guests also enjoyed King crab anticucho, pan-seared Miyazaki Wagyu beef, and a milk chocolateoatmeal mousse. Although Chef Nobu himself was not cooking that evening, he was greeting guests and remembered the Jet Linx team from earlier in the day, asking Day and company, “Hey, you! Where is my jet?”

“It was such a fun and unique experience, and it all came about because of the partnerships we’ve managed to form in the Denver area. Our focus on the local market is clearly working and creating special opportunities for our clients!” Day exclaimed.