Aircraft find new life as a desk, conference table, office divider – or even a bed – transformed by the skilled hands of workers at MotoArt.

Dave Hall, MotoArt’s cofounder and managing partner, has been working to create beautiful pieces of functional art out of recycled pieces of airplanes since 2001. He met cofounder Donovan Fell when the two worked together at a high-end signage company. “Donovan had saved a propeller and he made this beautiful propeller sculpture and took it to the Rose Bowl Swap Meet and sold it for, like, $1,500,” Hall recalled. “And he was so excited that he’d sold this beautiful piece of sculpture. I just looked at him, and said, ‘Donovan, you’re losing money on this. You spent literally 80 hours on this piece and sold it for $1,500.’ 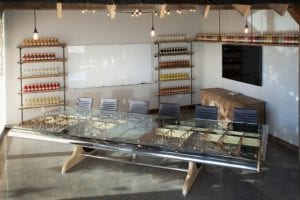 “But it was a passion: he loved what he was doing. At the time, I said, ‘Let’s go do a show. I’ll represent you and these propellers and we’ll call ourselves ‘Propeller Art’ and we’ll see how it flies.’ We went to the Barrett-Jackson show in Scottsdale, Ariz. back in 2001 and the enthusiasm of everyone was incredible! These props that we had – we sold every single one of them. And boom: we were in business. We knew we had something. So Donovan and I sat down, had breakfast and started scribbling out some notes about what we wanted to do. We were, at that point, set out to save aviation history and make it into functional art, and started scribbling down ideas of desks and coffee tables and that’s basically where it started.”

MotoArt’s first signature piece was an evolution of the original propeller sculptures Fell created. “The signature piece came when we still had these propellers and Donovan put a piece of glass on it, and made this little table. We called it the martini table, and we still sell them today – the DC-3 Martini Table,” Hall reminisced. From that original martini table, the duo made plans for future pieces that would blur the line between furniture and art. “That’s where the light bulb went off. He and I talked about the idea and we went to a boneyard, we got a wing, we took a galley cart and made it into a bar, and we just started piecing it together in our head. It’s like we went and found the parts and then reverse engineered it.” The pair began the company in Hall’s garage in 2001, and were incorporated as MotoArt in early 2002. Today, MotoArt employs over 16 at its workshop-turned-museum-turned-upscale event venue in El Segundo, Calif.

The MotoArt team continues to make innovate pieces of functional art from historic airplanes, preserving aviation history for generations to come. “It’s not like a car, where people restore cars over and over and over again. A lot of these planes, they stop flying them, they’re done. If they’re not in museums, they’re destroyed. That’s what we realized and that’s how we stuck in the aviation industry,” Hall said. “It’s definitely high flying. We called it MotoArt, because when we started we wanted to it to be any type of machine, anything industrial, and we thought MotoArt was a good, generic name and we could go in any direction with it. But once we started working with these aircraft, we realized that high flying was where we want to be.” 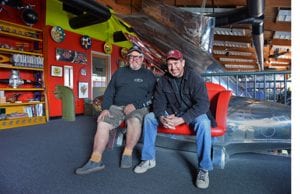 There’s no denying the artistry to MotoArt’s works, but the decision of which planes to use for specific pieces can be for a very practical reason. “It’s so difficult to sell a one-of-a-kind piece, so we kind of set out to make limited edition series. One of the first desks we came out with was the DC-9 desk. Why we chose the DC-9? Because we knew the DC-9s were coming off the line and we had access to them. So a good example, the DC-9 desk, we’ve probably made 300 of them in the last 15 years, just because we had the inventory,” Hall explained (pictured, near left, with cofounder Donovan Fell).

The company has experienced great success over the last decade and a half – at great surprise to its founders. “We had no idea,” Hall admitted. “We just kept saying: ‘Never give up, never give up, never give up.’ The first few years of this, it was a real struggle to get off the ground. We knew everyone liked it, and we were getting a tremendous amount of publicity and people writing about us because it was so new and different. Now … it became a world market. I always say, ‘What little boy doesn’t pretend that he’s flying?’” In addition to the workshop and showroom in El Segundo, MotoArt is distributed in Australia, China and Italy. Hall estimates 40% of sales made internationally. “It’s an international market, flight is,” he explained.

Hall counts the custom pieces for businesses among his favorites at MotoArt. “We get so behind these pieces, and we love them and we build them and we fascinate ourselves in how beautiful they turn out – and then you say goodbye to them, you know? We get to stare at them for a day or two and then we put them in the crate or truck and we ship it out of here,” he said ruefully. “One of the pieces we were tickled pink on is a piece we did for Lockheed Martin’s corporate headquarters where we did a big V-shaped C-130 flap conference table. We took two outer wing flaps of the C-130 and mitered them together and created a V, and it was a stunning piece. And, it was going to Lockheed Martin and they made the C-130s.”

One of MotoArt’s most infamous pieces found its home far outside the office. MotoArt’s Mile High Bed was created from two DC-9 rear stabilizers and a C-130 inner flap. “It wasn’t popular at all. But it got a tremendous amount of publicity,” Hall laughed. He and Fell disagreed about the bed: Fell wanted to create a bed, but Hall wanted to work on business-focused pieces like conference tables. “He said, ‘Look, we just need to sell one.’ He started it and it sat on the shop floor for something like seven months, and I was getting mad, thinking we needed to take it apart, finish it, something. And then it occurred to me, ‘I bet you I can get publicity out of this, let’s finish it.’ So he and I worked, and had this really fun photo shoot where we brought in a couple of models and a pilot. No kidding – there are still a lot people talking about it on the internet today. We got that money back out in marketing.” Today, the bed has been transformed into something even more unexpected: an art vehicle. “I used to go to Burning Man all the time, and I took that bed and made it into an art car and went to Burning Man with it,” he said. Customers looking to sleep in a bed from airplane parts can rest easy – MotoArt still offers a line of beds, including the Mile High Bed, for sale.

Hall makes sourcing parts for MotoArt’s work sound easy. “We get a tremendous amount of commercial aircraft, that’s what’s coming down the line: the 737s and the DC-9s and 747s. We have a seemingly unlimited supply of fuselage windows, so we’re doing picture frames out of them, conference tables, couches, you name it. We’re spinning it in a lot of ways,” Hall expanded.

Once the parts are found, the shop time to create a finished piece is extensive. “It’s very labor intensive, all these pieces. It’s a misconception that people think it just falls off the airplane looking this beautiful: it’s quite the opposite,” Hall explained. “You get one of those cowling desks … you have to strip away five coats, maybe six coats of epoxy paint. And there are several different cowlings for every engine, there might be three cowlings. There are just so many variables in each piece that in the sense of timing, timing can go anywhere from 60 hours to 500 hours just depending on the piece.” 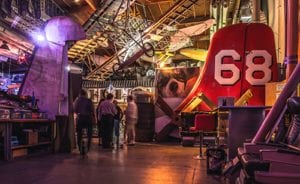 While most of MotoArt’s work eventually finds its way into high-end offices and homes across the world, the group has found a way to keep a few key pieces for its own collection. “Our studio really kind of looks like a museum now, after 15 years of collecting,” Hall related. “The DC-6 rudder that we have downstairs (pictured at right, with number 68), the tail number dates back and was registered to the Monkees. It was a touring plane back in the ‘70s and it went to the forestry department afterwards and then it was a firebomber. After it cycled out, they were trying to get a museum to pick it up and they couldn’t find a home for it, so they were left with no choice but to do a teardown. They called us and said, “How much do you want?” and we said we’d take the whole tail section. It sits proudly in the studio downstairs.” Because of the unique aviation collection in MotoArt’s showroom, the company rents the space for private events. “We have a lot of events here. It’s been a great side gig for us on the weekends to just clean up and have parties,” Hall joked.

One of MotoArt’s more unique side gigs was as the setting for a reality television show, WingNuts, in the early 2000s. “That was back in 2004, it was one of the first reality TV shows out there – we were right there with Monster Garage and Monster House. We were tickled pink when it came on,” Hall said. “When you do a TV show like that, I always tell people, ‘Be careful what you wish for.’ When we filmed that it was a very stressful situation, filming eight, one-hour episodes… they followed us around from Home Depot to eating breakfast, and they really exposed your life.” The show ended abruptly following the sudden death of Hall’s close friend and MotoArt colleague, Tim Roberts, who was 39. “In hindsight, the show was the best thing that ever happened to us, because MotoArt wouldn’t be what it is today if we’d never done the show; if we’d continued the show, MotoArt wouldn’t be what it is today, either,” Hall mused.

Today, MotoArt has made its name on high quality functional art pieces that celebrate aviation history. “It didn’t come easy, but now 15 years later we look around at what we have and know we’re pretty fortunate,” Hall said. “It’s like everyone else. Sunday was my day off yesterday, but I was nerve wracked about the next two weeks. We have three large jobs closing in this month and it’s just like any other business: there’s stress and you work through it and you problem solve. But I think that’s what makes me thrive is having 20 different projects going on at one time.

“It’s everyone’s dream to have their own company, I just happened to find something that’s extremely cool,” Hall laughed.