Founded in 2003, Living Legends of Aviation (LLOA) has been honoring aviation luminaries for their lifetime achievements and accomplishments in the aviation industry for 15 years. 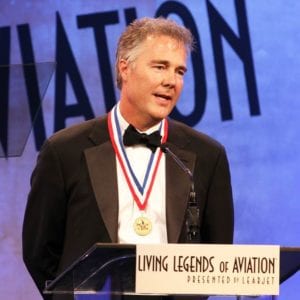 Lips began compiling a list of those who were making or had made significant contributions to and achievements in aviation. “I asked each of those on the initial list to nominate others,” Lips described in Airport Journals. We collected 70 names, and those became the biographies to be recorded while the individuals were still ‘living.'” The list has grown over the years to its present number of 96.

Among those on the prestigious LLOA list – Jet Linx Denver Partner and CEO, Jeff Puckett. “I met Harrison Ford while we were filming a short promo film for the Wings Over the Rockies Air and Space Museum in Denver,” he explained. “I was the Chairman of the Board at the time, and Harrison had agreed to fly his De Havilland Beaver into the Idaho backcountry to film his part.”

While filming in Idaho, Ford learned of Puckett’s personal “give back,” Prayer One. Through Prayer One, Puckett uses his Bell 407 helicopter to connect ministry leaders throughout the city of Denver, and breakdown barriers through the wonder of flight. “Around this same time, [Ford] was awarded Legends Aviation Legacy Award – an award that recognizes those individuals who use aviation to make the world a better place,” Puckett described. The following year, the award was renamed the Harrison Ford Aviation Legacy Award – with Ford personally choosing the recipient. “He picked me for the award at the 7th Annual Living Legends of Aviation Awards. I was very honored to say the least.”

The process for becoming a LLOA nominee has not changed since inception in 2003 – the current roster of Legends nominates those that will be recognized and the LLOA Board of Directors votes on the final honorees from those nominations. “The LLOA Executive Board initiates and approves all inductees, although suggestions can come from LLOA members,” stated Keith Singer, LLOA Director/Producer of Live Events. 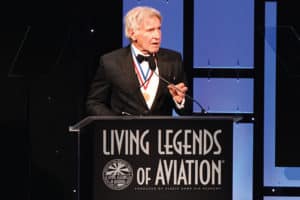 Ford has enjoyed life in the cockpit since the mid-1990s when he purchased a used Gulfstream II and decided he wanted to learn how to fly. “Ford donates his time and flying to search and rescue organizations in Idaho and California,” Puckett noted.

Puckett credits LLOA for introducing him to like-minded passionate individuals who have grown to become friends. “People like R.H. ‘Bob’ Hoover – the pilot of ALL pilots!” Puckett exclaimed with excitement. “Incredible person… he always treated me like I was the only person in the room. I loved him dearly – my son and I are both better pilots because of Bob. It’s crazy to think of even being friends with these true Legends, much less being honored alongside them.”

Those in the LLOA family serve as ambassadors to the next generation of aerospace legends – honoring those who help shape the industry today and encouraging young people (ages four to nine years old) to explore the opportunities available to them in the industry. “We were all young once and someone sparked our interest in aviation,” Singer remarked. “Our members remember that they need to be the mentors for the next generation, to spark their interest. If not us, then who will?”

Kiddie Hawk Air Academy, a non-profit, 501 (c) (3) founded by William “Bill” Macy in 1999, introduces children to aviation by applying “Trainers” (small, kid-sized mock aircraft) and a curriculum that includes aviation, mechanics, history and career opportunities. “The Kiddie Hawk Trainers give children a sense of flight, albeit only a few feet off the ground,” Singer noted. “It is the mission of the Kiddie Hawk Air Academy to give children the spark they need to help create the next generation of aviators, while teaching them the importance of academic excellence to reach their aviation dreams.”

The Air Academy’s curriculum includes aviation coloring books, principles of flight and actual flight lessons in the Trainer. Since the Kiddie Hawk Air Trainer was first unveiled in 1996, thousands of children have participated in the program. In 2016, the KHAA visited 16 states, drove 14,976 miles, handed out more than 8,000 STEM (Science, Technology, Engineering, Math) activity books and took over 10,000 kids on their first flight lesson.

Kiddie Hawk organizers, honorees, inductees and special guests travel the country – attending numerous air shows, presenting demonstrations at schools, hospitals, and many other events – to spread their message. “Our members encourage the industry to help young people discover the joys and opportunities that exist within aerospace,” Singer remarked. “In addition, they talk about the importance of and economic impacts aerospace has within our own communities.” 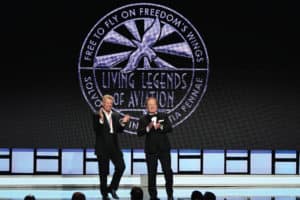 The LLOA Awards Gala, also known as the Academy Awards of Aviation, has been produced by Kiddie Hawk Air Academy since 2008 as their annual fundraiser. Held every January at the Beverly Hills Hilton Hotel, proceeds raised directly support Kiddie Hawk Air Academy. “Anyone can support the LLOA through financial support or volunteering and the LLOA Awards Gala is open to the public, too, so anyone can attend,” Singer explained.

Big names from Hollywood and the aviation community make up the approximately 800 in attendance – from John Travolta (the Gala’s host), Harrison Ford, Tom Cruise, and Morgan Freeman to commercial pilot Sully Sullenberger and astronauts Neil Armstrong, Scott and Mark Kelly, Dr. Edwin “Buzz” Aldrin. “The awards begin with a red carpet arrival for all guests,” Singer described. “There is a cocktail hour and silent auction before the doors to the ballroom open for dinner with activities and light entertainment before the big show begins.”

“I believe the Legends event and Kiddie Hawk help to remind all of us the incredible value that aviation has brought to our world,” Puckett shared. “It also affirms the equally important message that people in aviation are still doing great things that make the world better, and to inspire future generations to keep reaching for the sky.”

← Making the Most of Your Business Jet Why Buy Now? →
Join Jetlinx