The new partnership with Monumental Sports Entertainment marks a major moment for the Washington D.C. Base, taking the power of private aviation to team owners, players, and of course, the fans! “Monumental is the flagship ownership group in the D.C. area, with great teams like the Wizards, Mystics and Capitals,” noted Josh Rosenblatt, Jet Linx Washington D.C. Base President. “Monumental has done such a great job building their teams and retaining players, and fans in our area have really rallied behind the teams and this ownership group.”

As the Official Private Jet Sponsor for Monumental Sports Entertainment, Jet Linx will have a place of prominence at the Capital One Arena, a 20,000- seat multi-purpose sports and entertainment venue in downtown Washington, D.C. The arena is home to three professional sports teams – the NHL’s Washington Capitals, the NBA’s Washington Wizards, and the WNBA’s Washington Mystics. Fans of all three teams can look for Jet Linx on digital displays throughout the venue, as well as on seat backs in the VIP Courtside area. Rosenblatt and the Jet Linx D.C. team are excited to bring the local service and global reach of Jet Linx to the players and the fans. “Jet Linx offers all of our clients unparalleled, local customer service while maintaining the horsepower of a national company,” Rosenblatt stated. “No other large jet card company can compete with us in this area.” 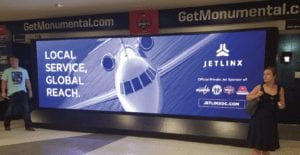 Jet Linx D.C. boasts the largest local fleet in the area, and is backed by over 100 aircraft in the Jet Linx fleet nationwide. The guaranteed availability of the Jet Linx Jet Card program is a natural fit for the changing schedules and rigorous demands of a professional athlete, team owner or the business executive. “Jet Linx is a smart choice for anyone with a demanding travel schedule,” noted Rosenblatt. “And not just for players and their families. Because team owner’s are also the ultimate fan, they want to see as many games as they can. We can help them accomplish this and make sure they are back home the same night.”

The partnership with Monumental and the D.C.- area professional sports teams is exciting to Rosenblatt on both a personal and professional level. “Personally, I’m a huge, lifelong NBA fan and I love the young talent we have on the Wizards, along with their coach!” he exclaimed, and then offered a positive season prediction. “I think the Wizards are going to be Eastern conference champion contenders for many years to come (hopefully there will be a few finals appearances in there as well!).”

His interest in D.C. sports extends to the ice as well. “I love the Caps and the consistency of the team,” he remarked. “They have been excellent for many years. I also love that the core of the team has remained together and I feel like we all know the players. It is absolutely exciting that now through this partnership, fans across D.C. will have a chance to get to know their personal jet company!”

Jet Linx Washington D.C. is proud to be the Official Private Jet Sponsor of: