MOVEMBER HAS LANDED IN THE JET LINX HOME OFFICE

Every year in November, men across the globe are challenged to sport an atypical mustache for the full month to increase awareness about health issues affecting men, ultimately changing the face of men’s health – quite literally.

The idea hatched in 2003 on a Sunday afternoon over beers at a pub in Melbourne, Australia, when Adam Garone, his brother Travis Garone, and one of their friends began discussing fashion and how over time, certain aspects of fashion tend to recycle and make a comeback… with one exception – the mustache. The three men pondered its demise, asking themselves why it had never made a comeback. After a few more pints, Adam Garone was the lucky mate challenged to unearth the mustache in an effort to bring it back on the face of fashion.

The first year was strictly a social experiment, comprised of thirty men competitively growing mustaches and throwing a mustache party at the end of the thirty days. “What really shocked us was the amount of conversation that was created by changing your appearance and growing a mustache,” stated Adam Garone, co-founder of the Movember Foundation. “So, the following year, me, my brother and two other guys got together and wondered, ‘how do we put the power of the conversations that are created by growing a mustache to good?’ then we added the cause – men’s health….and it just took off from there.” 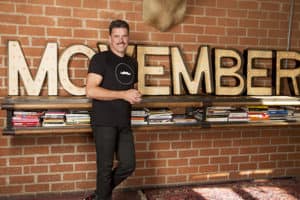 Movember has become an incredibly successful charitable campaign, raising 900 million dollars to fund 1,200 programs across the globe focused on men’s health, specifically prostate and testicular cancer and mental health and suicide prevention – which are the main, yet preventable, killers among men. According to Garone, men are dying six years earlier than women, largely due to their tendency to avoid difficult conversations about their health. He also cites research uncovering an inadvertent epidemic – social isolation. As men reach their thirties and beyond, they immerse themselves in their immediate family and work leaving little time for socialization with friends. If they experience a significant life issue derived from a financial issue, work issue, loss of someone close to them during the social isolation, the recipe can be debilitating when it comes to their health. The Movember campaign funds programs and research aimed at tackling men’s health on a global scale… and the mustache is their fuzzy billboard.

“The simplicity of growing a mustache – any guy could do it, it’s so visual and it’s a perfect word of mouth campaign,” Garone pointed out. “As you’d appreciate, when you’re growing a mustache, everyone will ask ‘what’s going on?’ Hence, the word spreads. The Mo Bros, the guys participating in Movember, virtually become walking, talking billboards for a whole month talking about men’s health and whatever aspect of men’s health resonates with them.”

Prostate cancer was Movember’s main concern in 2004. “That year we had about 450 guys participate and we raised $54,000 dollars.” Garone points out that no single effort focused on men’s health before Movember, which added to the movement’s exponential growth and success. “We certainly didn’t think men’s health was an issue,” he stated. “But the more we researched it, we discovered prostate cancer has the same impact as breast cancer. People were shocked to hear that. The state of men’s health was in pretty bad shape.”

The statistical figures for testicular cancer are lower, with one out of 263 males developing testicular cancer with an average age of about 33. Testicular cancer can usually be treated successfully therefore the death rate is very low – one in 5,000. “We hope to effectively cure prostate and testicular cancer,” Garone stated. “It’s just going to take more time, more money and more research. The bottom line, curing those diseases is our ultimate goal.”

In addition to prostate and testicular cancer, Movember also dedicates efforts to another disturbing health epidemic, mental health and suicide prevention. Mental health issues and suicide effects both men and women, however, Garone noted three out of four suicides are men. “That is something that had a direct impact on a couple of our friends,” Garone divulged. “It is by far the biggest health issue that affects men under the age of 55 and it is a much more complex issue. The numbers are staggering and unacceptable. So much of this issue is we’re just not opening up and talking about what is bothering us in our lives. We want people to talk about it.”

The timing of Movember in the United States falls perfectly with the onset of the holiday season, specifically Thanksgiving. “Many guys will go home and because of their mustache, conversations begin to happen around their health,” Garone continued. “They may learn that someone in their family had prostate cancer – for example a grandfather – so his son will learn he is twice as likely to get prostate cancer and will get screened. Then if he does have cancer, he is able to take the necessary steps for treatment. Without that conversation, that man may never have discovered he had prostate cancer. Those are the most powerful conversations that change people’s lives.”

Jet Linx’s Director of Fleet Management Nick Johnson launched Jet Linx’s “Supplying the Stache” campaign five years ago after his grandfather passed away from an aggressive form of prostate cancer, signaling he himself is at high risk for the serious disease. “The movement is important to me and I’ve always connected with humor, so the light-hearted nature of Movember has helped me focus on my health more now than ever,” stated Johnson. “After my grandpa died, my dad and I talked about check-ups and implications for us because of this movement.”

Jet Linx’s inaugural Movember campaign started with ten team members and raised a couple hundred dollars. “With the growth of the company and interest in the cause, we have grown to over 30 Mo Bros and raised $1,555,” he said. This year, $300 of that amount was raised by St. Louis pilot Andrew Polley, making him the highest earner in team history. “Here at the office, I start to get questions from eager team members in early October because they can’t wait to join the team and start growing out their facial hair,” Johnson stated. 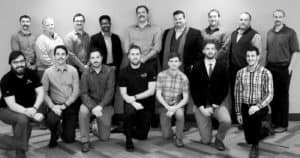 Movember is making a tangible difference in men’s health. New findings from research led by Dr. Robert Bristow of the Princess Margaret Cancer Centre in Toronto, Canada helped develop a genetic test to identify which men are at the highest risk for their prostate cancer to return after a localized treatment with surgery or radiotherapy. Dr. Bristow stated there is a clinical problem of under-treating men, therefore 30% to50% of patients will experience recurrence “due to hidden, microscopic disease that is already outside the prostate gland during initial treatment.” The ability to measure the level of disease severity will provide doctors the knowledge necessary to construct tailored treatment plans, improving cure rates in patients with aggressive prostate cancer while avoiding over-treating patients who do not have aggressive forms of the disease.

“Investments into research now may help myself, my friends and my family in the coming years,” Johnson stated. “The Movember Foundation does a great job of listing exactly where the donation dollars are going and what they are being used for each year – complete transparency,” Johnson shared. “The genetic test for men is just one example – there are many other programs working towards a cure with the funds raised from the Movember campaign.”

Garone and Johnson both agree the camaraderie surrounding the Movember movement lightens the mood, creating a forum in which fluid and important conversations can take place. Contests form around the globe, adding friendly competition among the Mo Bros – from who can grow the thickest mustache to who can raise the most money – events surrounding the cause bring friends, family and complete strangers together, forming bonds and creating relationships while raising funds for a worthwhile cause.

“There was one guy who grew a full beard for the two months leading up to Movember, then he auctioned off squares on his face and when someone made a donation he would shave a little patch off. The guy looked absolutely terrible the month of November! Absolutely terrible,” Garone laughed. Johnson grinned and joked, “That’s a good idea for next year!”

The success of the Movember Foundation earned the charity a name in the Top 100 Best NGOs (Non-governmental organizations) in the world by Global Journal from 2013-2016. Considering there are over 1.5 million registered charities in the U.S., Canada, U.K. and Australia alone, this is a remarkable achievement. “Humor has been the key to our success – making this fun,” Garone pointed out. “Growing a mustache is a bridge to important conversations!”

You can help raise the funds that deliver innovative, groundbreaking research and support programs to enable men to live, happier, healthier and longer lives. LEARN MORE AT MOVEMBER.COM.

← Golf For Good From the Flight Deck: Runway Declared Distances →