Breaking into an aviation career or a pilot job can be a somewhat daunting task. Finding the proper training facilities, educational opportunities and adequate financial support often leads to wear and team on aspiring aviators.

The Jet Linx National Operations Center team in Omaha is pleased to support the Burke High School Air and Space Academy. Burke, an Omaha public high school, is just down the road from the National Operations Center. The academy offers cutting-edge programs for students interested in pilot jobs and other careers in aviation. In December, eight students were taken on a once-in-a-lifetime trip arranged in part by Jet Linx.

A Trip to Southwest Headquarters

Jet Linx has a founding role in the Southwest Airlines Destination 225° program. Through our program connections, we were able to create a very special day. Jet Linx arranged for eight Burke aviation students to tour Southwest’s Operational Headquarters in Dallas, Texas. Students, teachers, and a liaison from the Jet Linx team received a complimentary flight from Omaha to Dallas on Dec. 11, 2019. The group received a VIP tour of the Southwest Airlines facility to learn about the vast opportunities available in aviation. 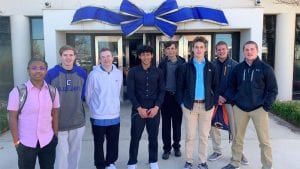 Students interested in pilot jobs and aviation careers outside of Southwest Airlines headquarters.

Burke High Curriculum Specialist and Director of the Burke Air and Space Program, Andrew Brooks, accompanied students on the trip. “We’re really thankful for Jet Linx and their partnership with Southwest that allowed for this one-of-a-kind opportunity. Our program is rare and chances like these do not present themselves often,” Brooks explained.

The Burke Air and Space Academy has become a leader in high school aviation programs in both Nebraska and the country as a whole. “Since 2011, have dedicated our program to building options and opportunities for all students who would like to investigate a career in aviation. Burke Aviation has developed direct pathways for our students to experience the real world of aviation and begin a lifelong career,” Brooks elaborated. “We’ve done so with the help of the best local aviation businesses like Jet Linx.”

Dee Ruleaux, Director of Human Capital Partnerships at Jet Linx, also serves as the Chair of the Burke Air and Space Academy Advisory Board. “We already have existing relationships with universities, but we wanted to work with even younger prospects. Burke High has an amazing aviation program in Omaha. We knew that this would be a good fit for Jet Linx, especially given our close proximity. Our recent partnership with Southwest, Destination 225°, allowed us to make the right introductions to bring a special day to life,” Ruleaux explained.

The Destination 225° program is an exciting new career pipeline for pilot jobs. This program provides motivated and capable candidates a career path from private aviation with Jet Linx to the commercial airlines with Southwest. Beginning in flight school, the military, or current non-pilot employment with Southwest, the program paves the way to a professional flight career. While Burke students are too young to enroll in Destination 225°, they used the tour to learn what to expect from an aviation career.

On the day of the tour, the group boarded a Southwest flight from Omaha to Dallas. Upon landing, the students stayed behind on the plane to speak with the pilots and flight attendants. Students were then taken to the company headquarters on a Southwest shuttle bus. On the way, they interacted with pilots, maintenance technicians, and flight coordination specialists, all on their way to a normal day on the job. Even before entering the facility, the students were impressed.

“I wish we had a camera when the elevator doors opened into the flight simulation area. The students’ eyes lit up, and they were shouting  because they were so excited,” Ruleaux described.

After a tour of the flight simulation room, the students toured the operations center where flight attendants and ground crews train. After a few hands-on experiences, they toured the network operations control room, where dispatchers and meteorologists work to keep the airline running every day. The students marveled at the size and the technology inside the facility at Southwest.

INSPIRING ANOTHER GENERATION OF AVIATORS

“It was amazing to see the operations center and the inner workings of Southwest. It definitely made me want to pursue a career in aviation,” Tayonna Kellogg said, a student at Burke High. While Kellogg was walking through the facility, a Southwest pilot offered her a business card. She told Kellogg to reach out if she needed anything in the future. “I knew then and there that I wanted to explore pilot jobs with Southwest. It was such an eye-opening experience for me,” Kellogg beamed.

The tour of the Southwest facility also opened the students’ eyes to other opportunities in aviation. While most students were interested in pilot jobs, others considered Flight Coordination. After seeing the Southwest dispatching area and discussing career opportunities with Southwest recruiters, this group left full of energy.

JET LINX AND THE BURKE AIR AND SPACE ACADEMY

“We have our own in-house Certified Flight Instructor (CFI) and Part 107 certified instructor. We are able to give our students the same instruction and certification that they could get in any flight school,” Brooks explained. “To have our students speak with real professionals from Southwest and Jet Linx allowed them to have candid discussions about the industry. That is something you just can’t teach in a classroom.”

Jet Linx is proud to support Burke High’s award-winning faculty at the Air and Space Academy. Assistance with funding, marketing strategy, design, and an internship program are all in the works. Two Burke seniors will begin interning at the Jet Linx Flight Coordination Department in January 2020, gaining real-world experience.

Jordan Maddex-Kopp, Vice President of Marketing at Jet Linx, assisted with a rebranding project for Burke Air and Space Academy. Above are newly designed posters.

“Jet Linx is proud to provide education and training to the future generation of pilots and aviation professionals. As the Chair of the Advisory Board, it’s my responsibility to help make things like this happen. We at Jet Linx have tools and expertise that simply aren’t available outside of a company of our size and history. From an organizational standpoint, we’re looking forward to providing mentorship and support to Burke High for years to come,” Ruleaux stated.

In the future, Jet Linx hopes to implement similar partnerships across the country. By connecting local Jet Linx Bases with local high schools and colleges, we will continue to encourage interest in aviation. In the face of the pilot shortage, we are focused on bringing new interest to the industry even earlier. We are also committed to guiding talent on their aviation journey. These crucial relationships with enthusiastic young aviators will move the needle in the right direction for the aviation industry as a whole.

“Our incredible relationship with Burke is just the beginning of a larger scale initiative. It’s not like we took these kids on a nice tour and now we’re calling it quits,” said Ruleaux. “We want these opportunities at all of our locations. These aspiring pilots, mechanics and aviation enthusiasts are the future of this industry. 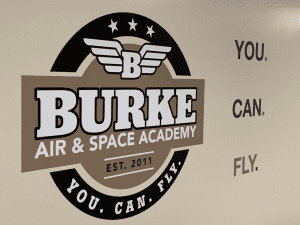 Jet Linx helped to redesign and sharpen Burke”s branding for the Air and Space Academy. Jet Linx hopes to attract graduates of the program into their ranks as part of the Destination 225 intitiative.

At Burke’s Open House in 2018, 283 students and 305 parents attended. A year later, 1,102 students and 963 parents attended. With more than a 300% increase in attendance for both students and parents, something is attracting interest to the local high school. The Burke Air and Space Academy likely helped to influence that trend, on top of the school’s rising profile.

Ruleaux and two other Jet Linx team members were on hand to answer questions from parents and students. Ari Sarmento, System Chief Pilot, and Toby Schneider, a Jet Linx Omaha pilot, were also there to represent Jet Linx. All three team members agreed that interest in the Burke Air and Space Academy had increased greatly from last year.

“We were blown away by the amount of interest from students and parents. Attendance from last year has quadrupled in most cases. Another positive that we saw was more female interest (than male) in becoming a pilot,” Ruleaux explained.

Aside from Jet Linx, five other local aviation companies had booths at the open house. Several local flight schools and the Flight Institute at the University of Nebraska at Omaha were in attendance. Eigth grade students got to see a flight simulator at the event, and quite unsurprisingly, there was a lot of interest in drone technology.

Ruleaux also revealed that the State of Nebraska will be awarding grants for young aviators. These grants will help to offset the cost of discovery flights for those wishing to learn more about aviation. This would eliminate a barrier that blocks many young people from entering the field at all. The timing could not be better with the increasing interest in the Burke Air and Space Academy.

Jet Linx is proud to partner with local aviation programs, allowing aspiring young aviators to spread their wings. You can learn more about the Destination 225° partnership here.

Companies across the United States and abroad are beginning to find ways to tame the boom and improve supersonic travel.

Jet Linx soars into South Florida with the official Grand Opening of Jet Linx Miami and the announcement of
Jet Linx Boca Raton.

Companies across the United States and abroad are beginning to find ways to tame the boom and improve supersonic travel.

Jet Linx soars into South Florida with the official Grand Opening of Jet Linx Miami and the announcement of
Jet Linx Boca Raton.