Jet Linx Atlanta was proud to sponsor the Atlanta Charity Clays shooting tournament for the second year in a row. The event raised funds for a number of Atlanta-area children’s charities, including Children’s Healthcare of Atlanta and Boys and Girls Club of Metro Atlanta. 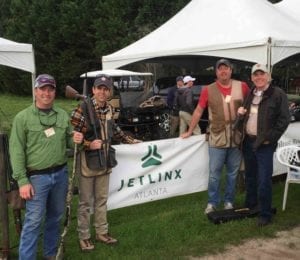 The event is an Atlanta tradition. The founders, tasked with planning a fundraiser and wanting to avoid another black tie affair, landed on clay shooting as a way to spend time outdoors with friends and raise money for charity.

“Stephanie Blank, one of our members, was a chair of the event this year,” said Scott Wilbanks, Jet Linx Atlanta Vice President of Sales. “We wanted to support Stephanie, and many of our clientele were in attendance. It was good to see them on a personal level, and it’s a very high profile event in Atlanta.”

The Jet Linx Atlanta team has a deep commitment to giving back in the community. “It starts with John Snodgrass [Jet Linx Atlanta Base Partner], who’s very philanthropic in everything that he does,” Wilbanks explained. “It rolls right into who we are as a company. Because we’re Atlanta-based, it’s extremely important to who we are and what we do at the Atlanta base.”

Learn more about Atlanta Charity Clays on their website.