Interview with an Aviator: Darren Rogers

After flying for nearly three decades, Jet Linx Tulsa Base Chief Pilot Darren Rogers fills us in on his story and what led him to Jet Linx.

Pilot Darren Rogers began pursuing a career in aviation in 1993 after an honorable discharge from the U.S. Army. While not involved with aircraft operation in the military, Rogers had memorable experiences as a child that pushed him to re-explore a career in aviation.

Since gaining his pilot’s license, Rogers has amassed 7,000 flight hours and has also earned a Private Rotor Craft Helicopter certificate. More than anything, Rogers enjoys the freedom and flexibility that come with being an aviator.

“The freedom to move around the world is the most rewarding. I get to experience different locations, cultures and scenery,” he said. “Some of my favorite destinations are the smaller, more remote airfields. When you’re doing trips to these tiny towns in the U.S., you get to meet these interesting people on the line that you ordinarily wouldn’t get to. When I get out and talk to these guys working in the middle of nowhere, it reminds me of myself. I love the opportunity to show them the aircraft, tell them about the company, and give advice to these people that are going to fill my shoes someday.” 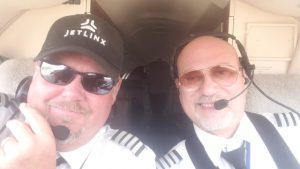 Jet Linx pilots Darren Rogers and Steve Pooler pose for a photo in the cockpit of a Lear 45.

HOW DID YOU GET IN TO AVIATION?

It all began in 1992 when I returned home from military service around Christmas. As a gift, my sister had purchased my brother-in-law a discovery flight, which I thought was really interesting. I should explain that I had spent my time in the U.S. Army as a member of the military police and worked primarily with canines, and I had no plans to become a pilot at this point. I had already applied to the Louisville Police Department, which was an intensive eight-week application process. While I was waiting for notice on my status as a police officer, I went out and purchased my own discovery flight. After 30 minutes in the air with a flight instructor, I was hooked. I knew then and there that I wanted to pursue a career in aviation. The Louisville Police Department did call me back, but I politely declined. That was January 5, 1993, and by the spring of 1995, I was First Officer in a Learjet flying freight out of Louisville, Kentucky. In two years, I went from zero flight time to Second-in-Command in a turbojet airplane and the rest is history.

WHAT WAS YOUR FIRST AVIATION-RELATED ROLE?

My first job in the world of aviation was as a line service technician. I’d fuel and wash airplanes, doing pretty much anything I could to be in and around the airport. I then worked my way up to a line service manager position. My first opportunity on the flight deck came when an owner/operator of a Learjet 24 noticed my enthusiasm. Whenever the aircraft landed, I would be the first one out there to clean bugs off the windshield and my hard work was eventually noticed. The owner commended me and contacted me a week or two later asking if I’d like to deliver some freight from Louisville to St. Louis, Missouri. I had my multi-engine rating, so I was allowed to sit in the jump seat on the way to St. Louis and was allowed to run the radios on the way back. About six months later, they called me and asked if I wanted to go through training to become their First Officer – I immediately said yes. Another six months down the road the Captain resigned. We were flying a lot of freight at that time, so I was immediately promoted to Captain on the Learjet 24.

DID YOU HAVE ANY RELATIVES IN AVIATION?

Nobody in my family ever flew or worked with planes, but the catalyst that initially sparked my interest was that the Tulsa International Airport used to have airshows every year. My parents would take me to see the Blue Angels and The Thunderbirds fly in formation, which left an impression on me. Another thing that sparked my love of flight was in 1977 when the Tulsa Port of Catoosa was first opened. At that grand opening they were giving helicopter rides, so I was able to get on a helicopter when I was about ten years old. To this day I’m still the only member of my family in aviation. I have tried to get my sons involved, but it’s just not for everyone!

WHAT KIND OF AIRCRAFT ARE YOU TYPED IN, AND DO YOU HAVE A FAVORITE TO FLY?

I’m an active flight instructor. I’ve flown everything from Cessna products to Piper products, the Learjet series, and I’m currently typed in the Citation XLS and Lear 45. However, one of my favorite aircraft to fly is the Boeing-Stearman. It’s a biplane that a local flight instructor in Kentucky allowed me to fly while he taught me a thing or two about aerobatics. But I do have the most time on the Learjet series, so I enjoy flying those aircraft as well. I also have a Private Rotor Craft Helicopter Certificate and am working my way towards receiving a commercial license.

WHERE DID YOUR INTEREST IN HELICOPTERS START?

I became interested in helicopters after receiving a ride at the age of ten when the Port of Catoosa opened. My other experiences occurred while serving in the military where I was able to ride inside from time to time. After my service, I was able to ride with an EMS helicopter friend a few times, as well as a friend who flew pipeline patrol utilizing helicopters.

DO YOU HAVE A FAVORITE LOCATION TO FLY TO?

Fort Hood, Texas, where my son, Christopher, is stationed in the military. Last year I was doing a trip with a Food Network star that was stopping there as part of a book tour. Fortunately, my son was able to meet us at the airport and it’s very rare that you would be able to fly into a military installation – let alone having your son meet you on the tarmac.

WHAT ARE SOME OF YOUR MORE MEMORABLE MOMENTS AS A PILOT?

While I can’t quite reveal everything, I did have the chance to fly Bart Starr, who was a quarterback for the Green Bay Packers (most famous for winning Superbowl I and II). I knew that he was going to be a passenger on the plane, so I had kept a few footballs in the back of the plane because if the opportunity arose, I was going to ask him to sign them for my two sons. Bart ended up seeing the footballs stowed away in the back when we landed in Birmingham, and he went right ahead and signed them for my sons. To this day, we still have those footballs. On top of that, Bart wrote a letter to the organization that I was with and he commended me for my professionalism and integrity. He was just a stellar guy to be around, and I love football, so that was probably my favorite experience.

WHAT DO YOU ENJOY MOST ABOUT WORKING FOR JET LINX?

I have been with the company for about four years and I really appreciate the set of core values that Jet Linx operates under. It’s really not just a talking point for us, it’s a way of doing business. I do believe that those values mean something to everyone. One other aspect I love about the company is the openness. There are lines of communication from the very top to the bottom. If I needed to, I could contact Jamie Walker without any trouble. I have access to everyone in the organization, all across the board. Lastly, team members are actively encouraged to supply feedback to improve the organization. The leadership is not afraid to listen to input and reconsider the direction of the business.

HOW WOULD YOU DESCRIBE JET LINX CUSTOMER SERVICE?

Each Base location really does know their clientele and serves them at an uncommonly high level. We know the preferences of our customers to a tee. We know our passengers’ favorite beverages, and we also know whether or not they enjoy them on ice. It’s much like a big family; we know one another by name. For passengers, this provides a huge sense of relief when they’re flying 1,000 miles. I think the comfort of flying with a trained, professional crew that know you on a more personal level is something that you can rarely find in any industry these days. Our level of service is consistently higher than what any other operator can provide.

In each edition of My Home Base, we feature a member of the Jet Linx team from across the country and showcase what they feel makes their Jet Linx location and their city special. In this edition, meet Greg King, Jet Linx Tulsa Personal Flight Concierge.

Congratulations to all of the Jet Linx 2021/2022 Core Values and Superlative Award Winners!

In each edition of My Home Base, we feature a member of the Jet Linx team from across the country and showcase what they feel makes their Jet Linx location and their city special. In this edition, meet Sydney Clarkson, Jet Linx Accountant.

In each edition of My Home Base, we feature a member of the Jet Linx team from across the country and showcase what they feel makes their Jet Linx location and their city special. In this edition, meet Greg King, Jet Linx Tulsa Personal Flight Concierge.

Congratulations to all of the Jet Linx 2021/2022 Core Values and Superlative Award Winners!

In each edition of My Home Base, we feature a member of the Jet Linx team from across the country and showcase what they feel makes their Jet Linx location and their city special. In this edition, meet Sydney Clarkson, Jet Linx Accountant.