Interview with an Aviator

In this Interview with an Aviator, we explore the aviation career of Ari Sarmento.

Sarmento recently returned to the flight deck for Jet Linx as not only a captain, but also the System Chief Pilot. His aviation career spans the globe. Born in a small village on the Azores Islands near Portugal and raised in California, Sarmento is a bit of a renaissance man. He has flown in war zones, for Presidents and Directors of the Central Intelligence Agency, and completed clandestine missions for the U.S. military. Read his story and learn what led him to again choose the culture of Jet Linx.

Why did you choose to become a pilot?

When I was a kid, my backyard was underneath the Bay Area airport. All day long, I would see airplanes flying overhead. As far back as I can recall, I have always wanted to be a pilot. It was a lifelong dream to fly.

When did your aviation career begin?

I started flying in 1983 in Tracy, California, before having my driver’s license. I had two paper routes and mowed lawns on the side to pay for flight training. My parents wanted me to be a Catholic priest but that never worked out…

Are there other aviators in your family?

No, they are mostly Portuguese fishermen in my family. I guess in a way, we were navigators. My family comes from the Azores Islands, which are tiny islands in the middle of the Atlantic belonging to Portugal. 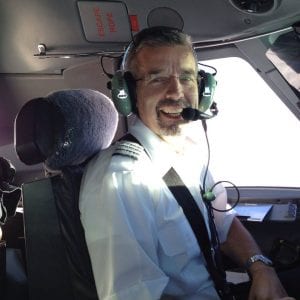 What do you love most about aviation?

Discovering new destinations, new foods, and the people that you meet during the voyage. I love the ability to depart a domestic location and within hours arrive at an international location.

Can you remember the first time you flew an aircraft?

I remember it like it was yesterday. I was 16 years old and I think I had nine hours of flying. Usually you have to land and take off with your instructor three different times before a solo flight. But my instructor on the runway told me to open the door and that he was getting out. I asked why, and he said because you’re doing this one on your own. My legs were shaking in the cockpit when I was landing. I landed fine, and I went out for takeoff and landed three different times. I was enjoying myself at that point, and realized I wanted to fly more.

How has your aviation career unfolded?

I started flying in high school and then went to a community college. I landed my first job with American Airlines at their hub in California in 1985. I moved to the American Airlines headquarters in a management understudy training program. I studied management, recruiting, operations, accounting – a little bit of everything. By 2000, I took an early retirement from American Airlines, deciding to go into the corporate aviation world. That took me to Long Island, New York, for a charter company where I was the Director of Training. From there, I went to Atlanta to be the Chief Pilot at Flightworks. I became the Director of Government Services, where I obtained the certifications needed so Flightworks could bid on U.S. military contract work. After we were certified for military contracts, I began to do some interesting work for clandestine organizations. Long story short, this led to opportunities like flying the Director of the CIA and several ex-Presidents. After Flightworks, I took a job with Shell Oil Company as an Aviation Consultant. I speak fluent Portuguese and Spanish, so I was in charge of their aviation assets in South America. I went to Brazil, Colombia, and French Guiana, inspecting planes and helicopters that were used on oil rigs. I did that for about a year, and after that served as a Chief Pilot for a supplemental air lift operator in Atlanta. When that company went into financial distress, I came to Omaha to become the System Chief Pilot for Jet Linx. As System Chief Pilot, I spent time traveling to our Bases all around the country. It was a smaller company at that time, on the cusp of great expansion. In 2016, a once-in-a-career opportunity arose when I was asked to fly Bill and Hillary Clinton for her campaign. After that campaign ended, I went back to Atlanta and flew a Gulfstream G650ER for a private owner. Our missions took us to Thailand, Korea, India, and anywhere the owner desired. I flew and oversaw this aircraft for two years, but I didn’t enjoy some of the more managerial tasks. Near the middle of 2019, I decided to come back to Jet Linx as the System Chief Pilot again. I’m happy to be back!

The route Sarmento took from Atlanta, GA, to Phuket, Thailand, in the fall of 2019.

Do you have a favorite aircraft to fly?

The G650ER is my favorite. It has a heads up display, allowing you to look up and out the window instead of down at the controls. With the HUD projecting indicators and information, it is like flying in a video game, or something akin to wearing smart glasses. The whole aircraft is so technologically advanced and painless to fly. It is also the largest and fastest business jet in the world.

Can you share thoughts on your mentor, Preston Wisner?

Preston was a pilot in the Vietnam War and also my first flight instructor. He set the foundational skills I needed in order to fly the aircraft safely. I met him when I was about 16, and he left a strong impression on me. He taught me to follow through, to be proficient, and to trust in myself at all times in flight.

What is your favorite place to fly to, and what was the most unique?

Well, my favorite place to fly remains the Azores Islands because I have a summer home on the island of Pico. It’s like being in Hawaii but it’s not as hot, and it’s just home to me. The most unique was Mazari Sharif in Afghanistan. Mazari Sharif was kind of like stepping back in time. There’s little running water or electricity, despite some French development. It is still much the same that it used to be many hundreds of years ago. The lifestyle there was vastly different. The food was wonderful, and the people were nice. It was such a stark contrast to anywhere else where I had been. 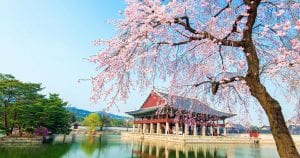 Sarmento says Kyoto, Japan, is one of the most beautiful cities on the planet, especially in the spring when the cherry blossoms arrive.

Tell us more about your time in Afghanistan supporting the U.S. military?

From 2011 to 2014, I was based in Kabul and Bagram in Afghanistan as part of a military contract. We had three aircraft that ferried people to and from forward operating bases so ground convoys would not be attacked. We also operated a Caribou aircraft, a Vietnam War-style transport with a rear door that opens up where supplies or personnel could be dropped. With the Caribou, we flew low-level resupply missions where we jettisoned pallets of water, fuel or food from 200 feet above ground. The parachutes would land right in front of the bases and the troops would come out and get them. It was too dangerous to send resupplies through ground convoys. I had to be trained for military emergency rescue in the event that we were shot down. I also had to learn to read military charts and operate weapons, and was assigned a rifle, a pistol, and armored protection.

What do you have to say about the work and safety culture at Jet Linx?

It was all a part of the reason that I returned here. Of all of the Part 135 companies that I have flown for, Jet Linx is head and shoulders above the rest. From an operational and cultural standpoint, this is the perfect place for me. Jet Linx has a great structure around operations. As far as the industry goes, we remain way ahead of the curve. Our safety culture and willingness to avoid risks is superior.