Kevin Chappell dabbled in the game of golf as early as the age of five, and began giving the sport more serious attention in 8th grade when his family moved close to a golf course.

His time at UCLA is ripe with accomplishments in the game – Chappell led 4th ranked UCLA to the 2008 NCAA Championship. He helped bring home that title in spectacular fashion, making a par on the final hole to give his team a one-stroke win. In 2008 he was also awarded several individual accolades, including the Fred Haskins Award (awarded to the nation’s top collegiate golfer) and the Jack Nicklaus Award (recognizing the top male collegiate player, with Chappell becoming the first UCLA player since Duffy Waldorf in 1985 to earn the distinction). He closed out his time at UCLA with an impressive resume of victories, including six titles during his time at the school and setting the school scoring record his senior year.

Jet Linx is not only about convenience but also about safety. They allow us to get places quicker and get the kids to bed on time in an efficient way.

Since turning pro in 2008, Chappell continues to shine. In 2016, he advanced to FedEx Cup Playoffs for the sixth consecutive time and made the TOUR Championship for the first time – where he finished runner-up.

Chappell notes that Jet Linx helps ease the sometimes hectic sensation of life on tour. “Jet Linx is not only about convenience but also about safety,” he said. “They provide a service that is specific to the traveler, and traveling 32 weeks a year, most of the time with my family, allows us to get places quicker and get the kids to bed on time in an efficient way.”

Look for the logo on tour! 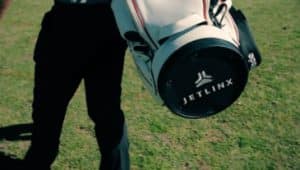