On October 10, 2019, Jet Linx Nashville Ushered in a new era with the unveiling of their private terminal.

A New, Members-Only Terminal in the Music City

More than 160 guests and friends attended an opening celebration. Accompanied by the soft notes of jazz from the Laura Mayo band, a waxing Hunter’s moon silhouetted above the hangar. Although it couldn’t technically be a “grand opening,” (Jet Linx has offered service and a local team in Nashville since 2016), the new private terminal deserves an encore.

Jet Linx Nashville was housed in Atlantic Aviation’s FBO at Nashville International Airport. It now occupies a 7,000-square-foot private terminal with an additional hangar. The new, members-only space has made a world of difference. 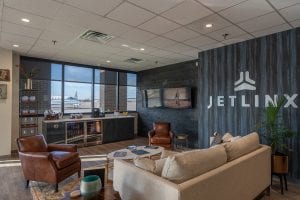 Jet Linx Nashville clients are welcomed into a comfortable lounge to relax and enjoy refreshments, before or after their flight.

“We were launching from the Atlantic FBO previously, so it didn’t differentiate us from other operators. Now that we have our own upscale private terminal, we can provide a higher level of service and privacy,” explained Roger Banaszak, Base President. “Nobody else at this airport has a space like ours. It’s a major differentiator for us. This facility will elevate our entire service from head to toe.”

Vintage guitars line the walls of the conference room (all from Base Partner Trey Sutter’s personal collection), and a putting green lies outside the private terminal. The putting green came in handy at the opening party, as guests were challenged to sink a putt in order to win a custom Jet Linx engraved bottle of Jack Daniels whiskey.

An Evening to Remember at Jet Linx Nashville

As guests walked past the putting green, they were welcomed onto the runway where six aircraft sat on static display… a Citation XLS+, Bombardier Challenger 350, Hawker 400XP, Lear 45, Cessna Jet 3, and even a S76 Sikorsky helicopter.

In addition to the impressive aircraft, luxury automobiles parked inside the hangar also turned some heads. Carlock Motorcars showcased an Aston Martin, a Rolls Royce SUV, and two Bentleys inside the hangar space. Jet Linx friend and client Darrell Waltrip, a three-time NASCAR Cup Series Champion (1981, 1982, 1985) and NASCAR Hall of Fame inductee, also had a vehicle on display – his famous 1997 Chevrolet Monte Carlo known to NASCAR fans as the “Chrome Car,” which Waltrip competed with in the 1997 Daytona 500 (where he finished in 10th position). The inside of the hangar transformed with the installation of a freight umbrella on the ceiling and a contemporary stacked chandelier. Chairs, couches, and tables were moved into the center of the hangar to provide an area for mingling and snacking on passed hors d’oeuvres.

Jeff Ruby’s steakhouse provided sushi rolls with yellowtail, spicy tuna, salmon, and shrimp tempura. Trevor Moran, formerly a chef at the Catbird Seat restaurant in downtown Nashville, was also on hand to provide entertainment and top-notch appetizers. Moran’s made-to-order steamed dumplings and Japanese shaved ice were crowd favorites. Moran is now pursuing his own restaurant with a local restaurant group that will specialize in – you guessed it – dumplings and Japanese shaved ice!

“The entire evening was a huge success. From the large number of static aircraft, to the food, to the luxury cars, it was all planned extraordinarily well. Our hangar felt like a ballroom with the draping from above and the cocktail service. It certainly speaks to our recent Forbes Five-Star training,” Jet Linx Nashville Base Partner Trey Sutter explained. “A lot of people relayed to me how beautiful and well-lit our signage is. This event was certainly a testament to the hard work our team has done and what’s going to be possible  in the future.”

The Jet Linx Nashville team looks forward to offering clients exceptional service from a larger and far more exclusive space. “From a service standpoint, we’re going to be able to offer our clients much more than before. The privacy inside the terminal offers an intimate experience, but the design exudes a relaxed, laid-back feel. There’s definitely some Music City flair inside,” Elliott Sutter, Jet Linx Nashville Director of Business Development, explained. “Whether you’re admiring the vintage guitars in the conference room or having a little pre-boarding putting practice – this is a place that people will want to stay for a while.” 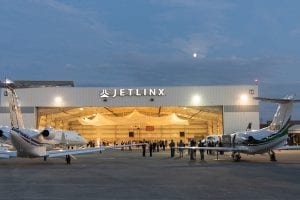 The Jet Linx Nashville grand opening featured a variety of aircraft and luxury vehicles on static display for guests to peruse.

Members of the National Operations Center team were also on-site in Nashville for the event. Jamie Walker, Jet Linx President and CEO, was fresh off a trip from the grand opening of the Jet Linx flagship terminal in New York’s Teterboro Airport on Sept. 25. “The Nashville private terminal stands up to any other in our organization – from the design to the professionalism of all the team members. This is absolutely going to change the dynamic here in Nashville. The opening of this space is something for everyone in Nashville to be extremely proud of,” Walker remarked on the tarmac.

“The grand opening event was perfect, but this is just the beginning of great things for Jet Linx Nashville. Stay tuned for more!” exclaimed Trey Sutter.