In 1843, William Matheson founded the Glenmorangie Distillery in the Scottish Highlands. Guided by founder William Matheson’s vision, the know-how has been passed down from century to century by the Men of Tain.

The Highland region is known for the most delicate and floral whiskies, and a land of incredible natural resources. The Tarlogie Springs, Glenmorangie’s own water source and most prized asset, is the product of rain that has been forcing its way through layers of limestone and sandstone for a hundred years. These natural minerals give it its ‘hard’ water qualities and provide Glenmorangie with a raw ingredient unique amongst Highland distilleries. The hard water produces fruity and floral notes during fermentation, and contributes to Glenmorangie’s distinctive house style.

Every bottle of Glenmorangie is crafted by the Men of Tain. Since the beginning, 16 craftsmen – known as the Men of Tain – were entrusted as the guardians of the Glenmorangie spirit, working together to craft Glenmorangie’s whiskies through the centuries. There was a time when the Men of Tain would line up for a daily dram of whisky with their lunch. Huddled together they would pass around a metal cup – blackened through constant use – and share a joke at the expense of one of the lads.

Today, Glenmorangie’s whisky continues to be handcrafted by the Men of Tain, who use time honored traditions, skills and expertise that have been passed from generation to generation. To keep up with the increasing demand for Glenmorangie’s award-winning Single Malts, there are now more than 16 Men of Tain, and even a few women, employed at the Distillery who help to craft their signature whiskies.

The heart of the Glenmorangie portfolio is the Original, matured for ten years in the finest ex-Bourbon casks. Glenmorangie’s Whisky Creation Team travels to the Ozarks in Missouri to hand-select the trees used for their American White Oak casks, which are left to air dry for two years and seasoned with American bourbon for another four years before making their way to Scotland to be filled with Glenmorangie. At Glenmorangie they use each cask only twice, to ensure maximum depth of flavor and character in each whisky. Glenmorangie’s whisky creators pioneered the art of extra-maturation, transferring spirit first matured in ex-bourbon casks into ex-wine casks, imparting new flavors into Glenmorangie’s famed Single Malts. Glenmorangie has transformed the category with its exceptional Extra Matured Range.

Through the Elevated Lifestyle client benefits program, every Jet Linx member and aircraft owner have exclusive access to a private client manager at LVMH, representing Hennessy, Glenmorangie and more. Discover how you can elevate your lifestyle, and claim your exclusive vintages from the world’s best distilleries and houses. 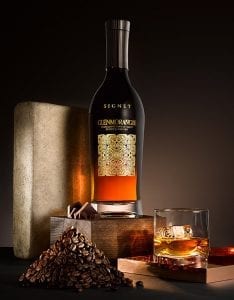 For just one week each year, the stills at Glenmorangie Distillery are dedicated to the creation of spirit for a ground-breaking whisky: Glenmorangie Signet. This pioneering single malt, which celebrates its 11th anniversary in 2019, was the first to use high roast ‘chocolate malt’ barley in its production, filling the air at the Distillery with a beguiling aroma of Aruba-rich coffee, and producing distinctive mocha flavors. Created by Dr. Bill Lumsden, Glenmorangie’s Director of Distilling, Whisky Creation and Whisky Stocks, Glenmorangie Signet includes some of Glenmorangie’s rarest whiskies and most exceptional casks.

At its heart is high-roast ‘chocolate malt,’ which is tumble-roasted in small quantities each year, coaxing out a spirit of espresso intensity that is remarkable in the world of whisky. This intensity is tempered, over many years, by a judicious marriage of unique cask types: creaminess comes from specially-crafted Bourbon barrels, sweetness from sherry butts; a spicy backbone from unusual virgin charred oak casks; whilst balance is provided by some of Glenmorangie’s oldest stocks.

The result is a spiraling explosion of flavor: sizzling spices and bitter mocha, mellowing into smooth notes of butterscotch.

“Glenmorangie has always been known for pushing the boundaries of the taste experience through innovation and Signet is, in many ways, the embodiment of that creative vision,” Lumsden noted. “I was inspired to create Signet bythe simple pleasure of a cup of my favorite Jamaican Blue Mountain coffee, but bringing it to life took years of hard work and painstaking attention to detail. It remains one of my proudest creations, and one I’m delighted to see enjoyed around the world by whisky connoisseurs and newcomers in equal measure.”

Signet’s name celebrates the enigmatic pattern taken from a lower panel of the 1300-year-old carving on The Cadboll Stone, an ancient Pictish monument which once stood close to Glenmorangie’s distillery in the Scottish Highlands. This iconic emblem adorns every bottle of Glenmorangie Single Malt Scotch Whisky. 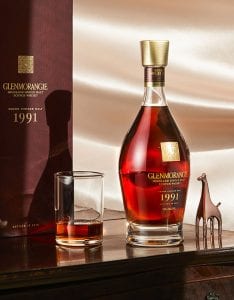 Glenmorangie is renowned as a leading pioneer in woodfinishing whisky. In 1991, when this whisky’s spirit was distilled, the art was still in its infancy and the distillery’s creators were alive to the possibilities that a wood finish could bring. This led to a period of intense experimentation, intent on creating new techniques and flavors. Inspired to revisit some of the parcels of whisky from 1991, Dr. Bill Lumsden, Glenmorangie’s Director of Distilling, WhiskyCreation and Whisky Stocks, experimented with the marriage of two profoundly different whiskies, which ordinarily would never be brought together. Dr. Lumsden selected two contrasting styles – both long-aged in bourbon casks – to create the Grand Vintage Malt 1991. One parcel finished in oloroso sherry casks offered sweetness and spice, while the other parcel was finished in burgundy casks and offered earthy, truffle notes. Softened by a hint of whisky aged in new toasted oak, the 26-year-old single malt offers rich intensity and mellow, plummy depths.

“Bringing together two such incongruous whiskies go somewhat against convention which, in part, is what drew me to the challenge of combining them,” said Lumsden. “The result is a single malt with a rich plum character, deep, mellow aromas and tastes of ripe fruits and milk chocolate. Glenmorangie Grand Vintage Malt 1991 honors those early pioneers who dedicated themselves to the art of the wood finish in 1991, whose work still guides us today.”