F.P. Journe’s craftsmanship appears once only every few generations. Each timepiece produced becomes more than a watch, it becomes a ticking treasure.

When François-Paul (F.P.) Journe uses gold in his watches, it registers as nothing more than a line on the spec sheet. Given the quality, exclusivity and the price point of the brand’s production – only 800 pieces are made per year – the addition of gold seems routine.

Few creations launched by F.P. Journe over the years have garnered more attention than the Chronomètre à Résonance. It’s quite well known that François-Paul has always had an interest in the early works of Abraham-Louis Breguet, recognized as the “Godfather” of modern watchmaking. In the early 1800s, Breguet experimented with the concept of resonance in a watch movement, crafting three pocket watches with a pair of movements/gear trains in a single housing, affixed to the same mainplate.

Due to resonance, even a weak vibration in one object could drive another object to oscillate with greater amplitude. An example occurs in a car: the engine causes vibration in another component, but the frequency of the vibrations is equal to one another, resulting in resonance. This resonance creates a smooth, quiet car ride. In watchmaking, only few attempted to take advantage of this phenomenon to improve accuracy, precision and rate stability of a timepiece.

In 2000, after more than 20 years of research and development, François-Paul became the first watchmaker to scale this principle down into a wristwatch, cementing himself into the watch industry record books one of many times through his illustrious and ongoing career. Since the turn of the millennia, the Chronomètre à Résonance has seen a delicate evolution through to its present-day state, as well as a handful of special variations for some of the different F.P. Journe boutiques around the globe.

The first variant of the Chronomètre à Résonance arrived in 2000 as a subscription series wristwatch using the principle of resonance in its movement design.

Only the second wristwatch to come from the manufacture of F.P. Journe and preceded by the Tourbillon Souverain—an equally complex creation—the subscription series was soon followed by a proper first edition collection of the Résonance. This version was produced from 2001 until 2003, initially launched with a rhodium-plated brass caliber fitted into a 38mm platinum case, with either a white, yellow, or rose gold dial. Within this period, Journe also produced a limited 99-piece series of Ruthenium dial Chronomètre à Résonance watches, whose grey dials differ quite dramatically from their gold counterparts.

The principles behind the caliber development draw very closely on those early works of Breguet, where its pair of unregulated balances oscillate side-by-side with very little clearance between them. The idea, fundamentally, is that the inertia of one’s oscillation will resonate through their shared mainplate, bringing the pair of balances into sync. 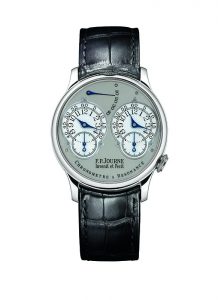 One of the biggest shifts in Journe’s overall watchmaking strategy was the move to crafting all of his calibers out of 18k rose gold.

This shift began in 2004, and of course the Chronomètre à Résonance was part of this transition. As this second generation of the watch appeared, Journe also announced the availability of two different case sizes, deciding to offer it both in 38mm and 40mm versions. Overall proportions remained the same – however, the second generation was also offered in a 18k rose gold case, matching its new caliber material. When it comes to time indication and other details, the watch remained unchanged, and this marked the beginning of special limited editions of the Chronomètre à Résonance hitting the market.

Among others, 2005 saw the arrival of a titanium-cased boutique edition for the second anniversary of F.P. Journe’s boutique in Tokyo, a darker dial variant in platinum made for Orologeria Pisa of Milan in 2009, and a unique rose gold model with a black mother-of-pearl dial that appeared somewhere within that same timeframe are just a few of the variations that surfaced along the way.

As the 10th anniversary of the Chronomètre à Résonance came around, François-Paul decided it was time to update his masterpiece in a way that involved more than a simple change in materials.

Rather than sticking with its conventional and symmetrical dual-subdial display of hours and minutes on a 12-hour scale, Journe scrapped the original time indication on the left side and opted for an orbital digital time display on the first half of the caliber. This was only part of the equation, however, as the leading time display now indicated time on a 24-hour scale rather than 12.

This modification also meant that the drive system and power required to run each of the two movements was now different, adding
to further technical challenges in bringing the watch to market. While some might not be sold on the lack of symmetry that came with the 2010 model, there’s something to the digital time indication and metal plating that surrounds it which gives the piece an almost industrial/steampunk sort of charm that is both uncommon and yet oddly well-fitting in the F.P. Journe lineup. 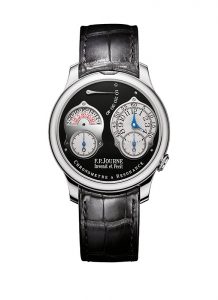 In 2019, watch lovers were introduced to a bit of a twist on the reference, and one that only lasted the course of a year.

Effectively a hybrid of the three previous  series of Chronomètre à Résonance models,  we see a return to the symmetrical subdials, albeit with a bit of a twist.

Using the mechanics developed for the  series three, the subdial on the left presents  home time on a 24-hour scale. These pieces  were only available in rose gold or platinum,  fitted in 40mm cases and either leather  strap or bracelets of their corresponding  case metals.

Series RQ: A NEW ANNIVERSARY AND A NEW CALIBER

With the updates through the first 19 years being relatively subtle, the 20th anniversary of the Résonance called for a major update.

Meet the Caliber 1520 – a thoroughly reworked movement for the now rather legendary watch. First thing’s first, its power reserve of 42 hours (up a couple of hours from its predecessors) is stored in a single mainspring barrel, rather than having a pair that each supplied their own half of the movement.

A differential of sorts is used to split the power between each of the geartrains, and then on each side a remontoir d’égalite is used to ensure steady power transmission through the unloading of the mainspring. Rather than an 8-second remontoir, as we have seen from Gronefeld in the past, the Journe remontoir unloads once per second. Though the total power reserve is considered as 40 hours, a resonance movement is a different beast altogether, so it is said that the movement design ensures the two balance wheels stay synchronized through a reserve of 28 hours.

Aesthetically  speaking, you’ll  notice a few key  changes to this  latest Chronomètre  à Résonance. The subdial layout remains unchanged  from the last edition, aside from an opening at the center of the dial. This opening shows the differential below the mainspring barrel, noting the key change in its movement configuration. At 12 o’clock, its power reserve has been reduced and simplified as well. Rather than sweeping across the majority of the upper quadrant  of the dial, it takes up far less real estate, and has a clear indication of when it needs to be wound. Lastly you’ll note two separate crowns; the top is for winding and setting; and the bottom to reset and sync the subdials.

With the change in movement, the Chronomètre à Résonance has gotten only a touch larger. Available in 40 and 42mm diameter variants (in either red gold or platinum, as usual), its case thickness has increased by 2mm, bumping up from nine to 11.