I was stationed in northern Germany, a former East German airbase, home to the biggest logistics regiment of the German Luftwaffe in the 90’s. We had access to roads, railroads and a runway. This airbase was also home to a civilian terminal, including a flight school (with my training aircraft seen above!).

As with many pilots, a Discovery Flight can be all it takes, and I was no exception. In late 2001 I found an advertisement in a local newspaper about that flight school offering discovery flights. I joined a rather small group of like minded people that day. After a short introduction we were taken to two Cessna C172s. Following another short brief, we took off… one at a time. It was a short flight but everyone in that group signed up thereafter.

My first solo flight – the first milestone for every pilot – happened on a cold day in December… Friday the 13th, of all days. It took me about six months to complete my training and receive my German Private Pilot License. But no matter what… I wanted to make flying my career after the military.

In 2004, I enrolled in a career program at a flight school in Phoenix AZ. By 2005, I finished the program with the completion of my Flight Instructor Certification. After another two years I had accumulated about 1,400 hours, enough to join the charter world.

I’ve explored a lot of planes in my professional career. In 2011, I started flying twin airplanes (cargo) in the Southwest, and later flew Air Ambulance in King Air’s. In 2014, I started flying passenger charters, again in the King Air and finally, jets as well.

No doubt, it has been a long journey! But despite any setbacks, and struggles along the way, I have no regrets and enjoy every day as a pilot. 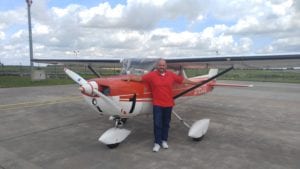