Why I Fly – David Buono, Jet Linx Fort Worth

Like many pilots, my passion for aviation goes back to when I was a kid. My dad took me to a local airshow one Saturday. He probably thought he was just spending a few hours with his son, but little did he know my life would never be the same. In early grade school, anytime I was “doodling” it was airplanes. I began to gravitate towards pictures and stories that involved being in the air. I was in 3rd grade when I saw the movie Top Gun for the first time, and to say I became obsessed is an understatement. I watched it so many times, the VCR tape eventually quit working. 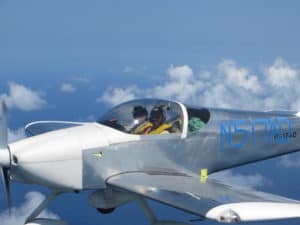 My passion for all things aviation continued through high school, and I tried to convince my parents to let me get my private pilot’s license – an idea they shot down.  My next move was to attend college to study aeronautical engineering – Virginia Tech. Prior to leaving for college, another seemingly innocent event took place. I found out there was a skydiving drop zone not too far from my house. At the time, I looked at it as a way to get in the air. Over the summer, I convinced 12 of my friends to make one skydive prior to going our separate ways in college. August 10, 1996… When the day finally arrived, only four of the 12 were brave enough to show up at the drop zone. We were greeted by a Cessna 182 that had so much duct tape on it, we were sure that it had been scrapped for parts and the real airplane must be somewhere else. Turns out that was our airplane, and the pilot had just celebrated his 78th birthday. Those two things alone should have sent us running, but we stuck it out and after a full day of class studying the “what if” scenarios, we took off. At 2800 feet above Cranberry, PA, with my heart pounding through my chest,

I stepped out on the step of the airplane and let go for my first ever skydive. For me, the experience was life altering. I knew, more now than ever, that I needed to be in the air. I went back to that drop zone a week later and did it again. Over the next year, I progressed enough to get a skydiving license. 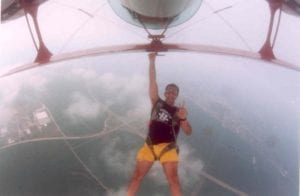 And I never lost the passion for wanting to sit in the pilot’s seat. Every chance I got, I sat up front with the pilot, because it was the closest thing to flying the airplane as I could get. After college, I finally had the money to get a pilot’s license, but I didn’t have the time due to my travel schedule. So after a few years, I decided to start my own company. As part of that planning, I left about six weeks between leaving my employer and starting my first contract on my own. Four weeks and 40 flying hours later, I had my pilot’s license.

After moving to Dallas to enjoy milder winters, I undertook a new venture – building my own airplane, a Vans RV- 7A from a kit. I spent three years building it in my living room, and I flew it for the first time on February 6, 2010. During that build, I also had another major life event… I got married. My wife and I enjoyed (and still do!) flying the RV around and took it on many cross country trips, even taking it to the Caribbean a few times.

In 2013, I was ready to dive head first into an aviation career. We purchased some land at Aero Country Airport in McKinney, TX and built a house with a hangar 50 feet from our back door. I added my multi-engine and commercial ratings, and I started a job working in a simulator at FlightSafety DFW. After meeting pilots from numerous flight departments, I decided I wanted to work for Jet Linx in Dallas – and here I am today.

Twenty or so years after I originally wanted to start a career in aviation, I did it! I get asked “was it all worth it” a lot from friends and relatives, and my answer is a resounding “yes.” There’s a reason I spent thousands of dollars to get my ratings… There’s a reason most pilots will talk your ear off if the subject is anything aviation related… And it’s the same reason my eyes were turned skyward most of my childhood. It’s called passion. Aviation is a passion I’ve had most of my life, and there’s no shaking it. The only cure is to get some air between my feet and the ground. And doing it as a career has been one of the most rewarding decisions I’ve ever made.