During the last two decades, the number of women in aviation has steadily increased. The representation between genders remains far from equal, however.

At the first annual International Women in Aviation Conference in 1990, participants recognized the need for more women in the industry. They also sought a support group to serve as mentors and advisors. Following a number of successful conferences, Women in Aviation International (WAI) was established as a professional, non-profit organization in 1994. Their mission remains to promote female participation in the aviation industry. 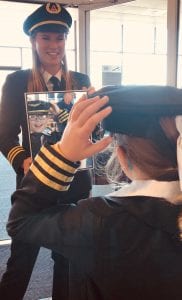 A future female pilot sees her reflection at a Cleveland Girls in Aviation event.

The Growth of WAI and Girls in Aviation Day

Today, WAI is home to 15,000 members. Their membership includes:

WAI provides year-round resources to assist women in aviation and encourages young women to consider aviation as a career. Annually, WAI provides $600,000 in scholarships. However, they offer much more than financial support and educational programs – they offer an inspiring and inclusive community for females. Their most recent initiative, Girls in Aviation Day, which is open to the public, has proven to be wildly successful.

On Oct. 5, 2019, more than 20,000 girls at 119 sites worldwide celebrated the fifth annual Girls in Aviation Day. The events were organized by local chapters of WAI. Truly an international event, Girls in Aviation Day was celebrated not just in the United States but in 17 other countries. These countries included Botswana, Cameroon, England, France, Ghana, India, Kenya, Italy, Netherlands, Nigeria, Scotland, South Africa, Spain, Switzerland, Zambia, Australia, and Canada. Girls were introduced to the career possibilities in aviation and aerospace through conversations with role models, career panels, and exploring airplanes and airports. They also enjoyed a host of hands-on, fun activities ranging from a sectional chart treasure hunt to making jewelry using A&P tools.

Molly Martin, Outreach Director at WAI, was thrilled with the progress that the initiative has made over five years. “We began Girls in Aviation Day in 2014 with 3,200 girls attending events at 32 local chapters. To see the initiative grow to where it is now in 2019 is unbelievable,” Martin beamed. In fact, most events at local chapters were so well-attended that many young girls were put on a waiting list.

“The event hasn’t grown because we have promoted it more, it’s because communities and businesses want to see more of it.”

Martin explained that Girls in Aviation Day began as a result of a “Bring Your Daughters to Conference Day” at WAI’s annual conference. “About ten years ago at the annual conference, attendees were asked to bring their daughters. Our attendees are so impressive and inspiring that – of course – they all wanted to bring their daughters and have them experience the energy created. After a good turnout over the years, we decided to organize something with all of our local WAI chapters.”

After sustained success, the leadership at WAI knew they had to conduct Girls in Aviation Day on a broader scale. Through their local chapters, they opened the event to the public. “Because it was already being done at the conferences, it wasn’t that difficult to roll out to the local chapters. Our first-ever Girls in Aviation Day took place in 2014, and each year it continues to get more and more popular,” Martin beamed.

Participation in Girls in Aviation Day has spread far beyond the original vision of Martin and WAI. Airports, FBOs, museums, universities and corporate members have joined WAI Chapters in recent years. Corporate Members like Jet Linx now play a large role in sharing how aviation offers young women a rich variety of career choices. Dee Ruleaux, Jet Linx Director of Human Capital Partnerships, helped coordinate Jet Linx involvement at Girls in Aviation Day in 2019. “We hope to host Girls in Aviation Day events at each of our locations in the near future,” Ruleaux commented.

After attending the Cleveland event, Martin reflected on the impact of Girls in Aviation Day. “I’m in awe of this new generation of aviation hopefuls. They were wide-eyed when the medevac helicopter landed and the female crew emerged from the aircraft. The attendees asked great questions of female professionals from NASA and FAA. Young girls groaned in frustration as they slid their flight simulator into the trees on the side of the runway. They later whooped with joy when they greased their landing on their next try,” she exclaimed.

“You only have to attend one Girls in Aviation Day event to know that this is making a difference.”

“Imagine a young girl donning a pilot hat for the first time, or getting to meet a female pilot face-to-face. Girls in Aviation Day definitely changes lives. We’re sure of that.”

Sheryl Clarke, Jet Linx Director of Safety and Air Force Veteran, is a member of WAI. She volunteered with the local WAI chapter in Omaha for Girls in Aviation Day 2019. Clarke and other team members from the National Operations Center helped to teach aspiring female aviators. 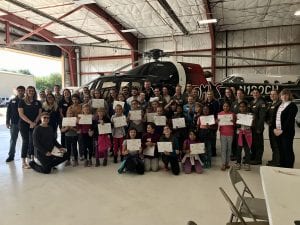 Clarke has an extensive aviation background and was able to bring those experiences to the Omaha event. She was part of the first mixed-gender class at the U.S. Air Force Academy and went on to become a female pilot. “It’s so important to encourage young girls in their formative years and to give them these kinds of positive learning experiences. Their faces lit up when they succeeded at our station,” Clarke noted.

“However, the push here is not only for girls to become pilots. There are many facets of aviation that lack female participation. We need women in flight coordination, maintenance, and leadership. It only takes one positive learning experience to make a huge impact down the road.”

Martin and leadership at WAI realize that they both helping women secure jobs in the industry and combating the pilot shortage. “For us, Girls in Aviation Day is a long play to combat that shortage. In the shorter term, we’re handing out scholarships that will allow females to become pilots in six months to two years. But what we’re really doing with Girls in Aviation Day is lighting a spark. That’s a long-term solution.”

She further explained that alongside the growing interest in Girls in Aviation Day, they want to continue to provide a more quality learning experience. “We’re less worried about numbers and more concerned with the quality of the experience that we provide. We want to make it easier for our chapters and corporate partners to hold events. We want kids to be more engaged year-by-year. A lot of kids come back, so our programming has to keep improving,” Martin emphasized.

Jet Linx is excited to help further the mission of WAI, as Ruleaux and Martin have discussed strategies for outreach in 2020. “Beginning next year, we will start relationships with local chapters of WAI at each of our Base locations. Ideally, Jet Linx will support functions for WAI nationwide and engage with future pilots and the next generation of women in aviation,” Ruleaux said.

The next Girls in Aviation Day will be held on Saturday, March 7, 2020, in conjunction with the International Women in Aviation Conference.