The story of Sea Island began with Howard Coffin in 1910, who at that time had no intention of creating a resort off the Georgia coast. He was an industrial magnate from Detroit known for creating the Hudson automobile. When he was traveling to promote his cars in the 1910 Savannah Road Race, he was introduced to Sapelo Island, just north of Sea Island. Coffin quickly fell in love with the barrier islands of the Georgia coast, so he purchased Sapelo Island and built a stately home, welcoming key figures of his day. In subsequent years he purchased Sea Island and tracts of land on neighboring St. Simons Island with the belief that others would appreciate the environment as much as he did.

Coffin expected visitors to enjoy spending time on Sea Island, and understood that, while he did not play the game himself, golf would be an important amenity. As plans were being drawn by noted Palm Beach architect Addison Mizner for The Cloister hotel on Sea Island, work also began on the resort’s first nine-hole golf course, which opened in 1928. Golfers arrived as Coffin had predicted, with guest accommodations aboard the Amphitrite, essentially a floating hotel docked near the golf course. They were happily ensconced there until The Cloister opened in October 1928.

Although Coffin had a golf course and beautiful Mediterranean-style property, early success was soon affected significantly by the Great Depression. Ingenuity and keen management weathered the storm, and the company survived, in part by printing its own money. Scrip paid to employees was honored by local businesses in trade for food and necessities. Coffin passed away in 1937, with leadership passing to Bill Jones, Coffin’s much younger cousin, who led the company to turning a profit in 1941. Bill Jones, Sr., Bill Jones, Jr. and Bill Jones III’s leadership of the family-owned resort continued, with honors and accolades amassed along the way. Extensive improvements in the early 2000s brought all-new resort buildings, including The Cloister, the Beach Club, The Spa, and The Lodge at Sea Island. Today, the resort is part of a 100-year family trust formed by the Anschutz Family, and the family orientation continues.

“There is a legacy of family here. We treat each other as family, we welcome guests as our family, and we are family-owned. That’s a special combination,” shared Merry Tipton, the Director of Marketing Communications at Sea Island for the last 27 years. “We provide gracious southern hospitality, from the heart. Our bellman will remember you from the first time you arrive until the time you bring your grandkids here. We have a real love of serving folks and making them happy. While we are blessed to have world-class facilities, it’s our people who make Sea Island one of the finest places in the world.”

With its privacy, heartfelt hospitality, and gracious service, Sea Island has long been a destination for dignitaries and some of the world’s most important citizens. This is evidenced by its series of commemorative oaks, planted by some of the most memorable names in modern history: Presidents Calvin Coolidge,

Dwight D. Eisenhower, Gerald Ford, Jimmy Carter, George H.W. Bush and his son George W. Bush, as well as Bill Clinton. The grand reputation of Sea Island was reinforced when it hosted the G8 Summit in 2004, when George W. Bush selected the site for its privacy and impeccable service.

Options for comfort and service abound at Sea Island. Guests may stay at Forbes-rated properties The Cloister or The Lodge, or opt for The Inn on St. Simons Island. A variety of cottage accommodations are also available on Sea Island, with three- to eight-bedroom homes available for rent. What remains the true difference-maker at Sea Island is the service provided to guests, which is the same no matter where you choose to rest your head.

The Cloister has served as the essence of luxury at Sea Island since 1928. The Forbes Five-Star property is a Mediterranean-style masterpiece that resulted from a complete resort redesign. Today’s Cloister and The Spa opened as all-new facilities in 2006, followed in 2007 with a new and expanded Beach Club. The Cloister offers 265 elegant guest rooms and suites with views of the Black Banks River and the Atlantic Ocean. Hardwood floors, exposed beam ceilings, gleaming wood furnishings, and handmade Turkish rugs all add to the appeal of The Cloister. With four different dining options and a wine cellar packed with 1,000 different labels, you will not want for anything. Generations of guests keep coming back to enjoy the elegant, sophisticated property.

The Georgian Room is the only Forbes Five-Star restaurant in Georgia and is located within The Cloister. Chandeliers of crystal and gold, floor-to-ceiling windows, hand-painted china, and a fireplace with a carved stone mantel are all impressive, but the tableside service and ever-changing menu are what keep guests satisfied. The menu often focuses on classic dishes dishes using French techniques, and collaboration between the culinary and beverage teams provide the perfect complement between food and drink. Reservations are required for this fine dining experience, and cocktail attire is recommended. While The Georgian Room is the pinnacle dining experience at Sea Island, there are eight other restaurants at the resort, with distinctive menus and different atmospheres to suit any occasion. 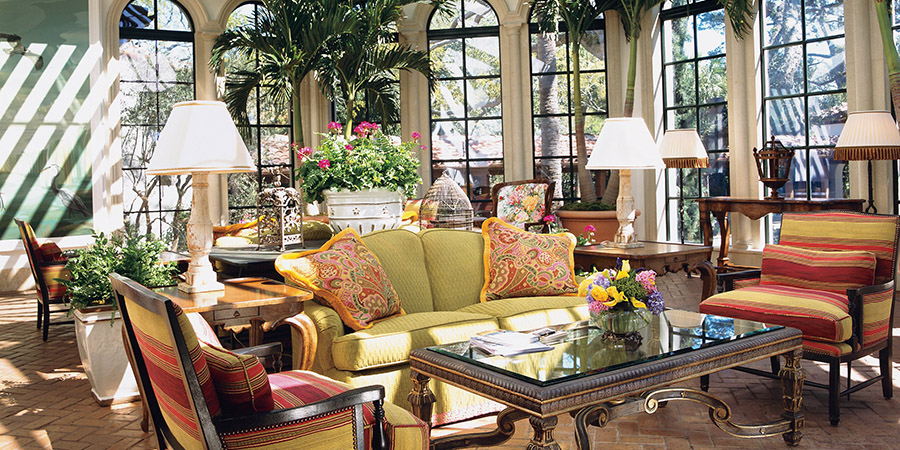 The Lodge at Sea Island, a Forbes Five-Star and AAA Five-Diamond award winner, was opened in 2001. Reminiscent of a classic English country manor, the intimate 57-room hotel and golf clubhouse offers ocean views amidst ultimate privacy and luxury. Butler service provides personalized, 24-hour attention, fresh-baked cookies at bedtime, and a resident bagpiper performs at sundown every day. Even after a day of activity, the opportunity for leisure never ends, as guests enjoy rain head showers and complimentary rose petal baths in spacious marble bathrooms.

In 2019, The Lodge was enhanced with six new guest cottages overlooking the St. Simons Sound and the Atlantic Ocean. An oceanfront pool and pool house have also been added, along with an 18-hole putting course that brings a new dimension to The Lodge experience – offering guests a perfect activity to sharpen their short-range game.

The Inn at Sea Island features some of the same Addison Mizner Mediterranean touches seen throughout the resort, with more casual accommodations. Located a few minutes from The Cloister and the Sea Island Golf Club, The Inn features 85 guest rooms, the Topgolf Swing Suite, heated pool, evening bar, complimentary breakfast, and laundry facilities. Guests of The Inn have the option of purchasing access to many Sea Island amenities, including golf, spa, fishing, boating, and dining.

the finest in golf & golf performance

Sea Island is home to three diverse golf courses. The most famous, Seaside, is home to the RSM Classic on the PGA TOUR every fall. Hosted by Sea Island’s own Davis Love III, the tournament is in its tenth year.

Sometimes referred to as “The Mayo Clinic of Golf,” the Golf Performance Center at Sea Island is a 17,000-square-foot golfer’s paradise featuring six instruction bays, full-service club fitting workshop, and a putting studio. Outdoor hitting bays open up to sweeping views of the Atlantic. Students have the option to be wired up to have their swing analyzed, and there is even a putting platform that generates slope, complete with a projection system that shows how the putt will break.

“The Golf Performance Center at Sea Island is dedicated to helping players play better and enjoy the game of golf with a holistic, comprehensive approach, regardless of their skill level, from beginning golfers to competitive juniors, touring professionals and everyone in between,” said Brannen Veal, Director of Golf. “This new facility combines the latest cutting-edge technology with the finest teachers in the country, taking what we provide to an even higher level than before.”

“We truly believe it’s the finest in the world. The facilities that we offer, combined with the level of instruction, provides a depth of service that nobody else can match. Our instructors are some of the best in the sport,” Tipton explained. Sea Island employs an all-star cast of instructors at the Golf Performance Center. Randy Myers, the Director of Fitness, has worked with more than 70 PGA pros, including Dustin Johnson. The star-studded cast also includes the putting whisperer Phil Kenyon, who has worked with Justin Rose and Francesco Molinari, as well as resident mental game expert Dr. Morris Pickens, coach of three different major champions. Famed LPGA instructor Gale Peterson can also be found on the grounds, as well as master club fitter Craig Allan.

Myers is often named as the first to bring a more scientific approach to golf starting in the 1990’s. In a master’s thesis he explained how stretching and weight training could extend a player’s range by 10 to 20 yards. Previous to Sea Island, he has been the Director of Fitness for four different U.S. Ryder Cup Teams. “Fitness can make a big difference more easily than people think,” he says. “But it needs to be individualized, golf-specific fitness, because everyone’s body is different, and everybody’s goals are different.”

The Golf Performance Center is one part of a $30 million enhancement program at The Lodge at Sea Island. Capping the program is the redesign and renovation of the Plantation Course, which along with the signature Seaside Course serves as the site of the annual RSM Classic. Davis Love III and his brother, Mark, of Love Golf Design have designed the renovation, which began in November 2018 and will reopen ahead of the 2019 RSM Classic this fall. 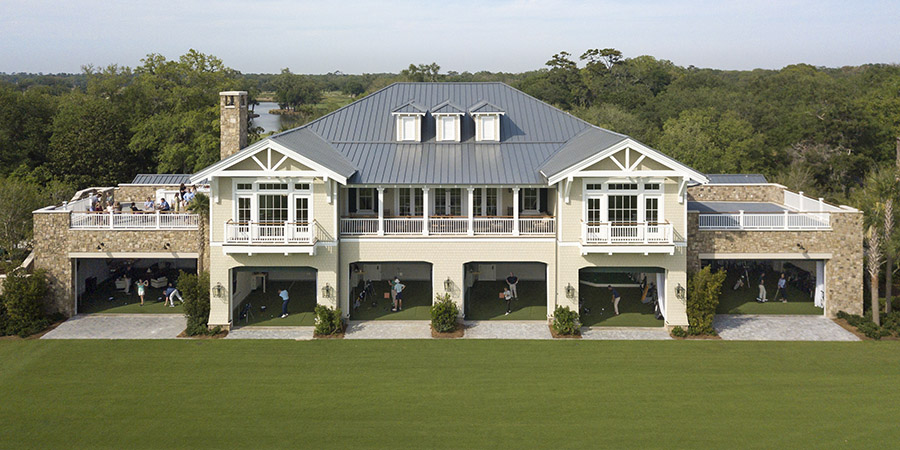 fun for the entire family

While renowned worldwide for its golf facilities, Sea Island offers much more in way of recreation.

“Although golf is a signature activity, we’re surrounded by a phenomenal environment. As a barrier island, we’re part of the largest salt marsh on the Eastern seaboard, which acts as a breeding ground for sea life such as shrimp and oysters, attracting all kinds of other wildlife,” Tipton explained. “Especially for first-time guests, I highly recommend a nature boat ride where you can catch glimpses of dolphins, birds, and other sea life. Our natural environment and access to Mother Nature should not be missed.”

Guests are also encouraged to take part in a time-honored activity at the resort… Bingo. “While many people may shrug at Bingo, it may just be our most popular activity outside of golf. Imagine little boys in khaki britches and bow ties, multi-generations of families dressed in their finest, a room of 500 people enjoying Shirley Temples. First-timers catch on quickly to phrases used by Ringo Bingo as he calls out numbers and the crowd chimes in. It’s a perfect example of family fun, and a tradition that’s brought back generations of guests so that their children can have the same experiences,” Tipton beamed.

The team at Sea Island will happily plan itineraries for guests based on their interests. From walking tours and paddleboarding to sporting clays and fly fishing, guests merely need to indicate their interests and the Sea Island experts will ensure no time at the resort is wasted.

Guests bringing children to Sea Island will be happy to know that many of the recreational activities are also geared towards younger visitors. Between five miles of private beach, nine restaurants, three championship golf courses, seven swimming pools, and an award-winning spa, guests at Sea Island will find no shortage of activity – with Southern hospitality served at every turn.