Discover how the exacting standards of Dom Pérignon creates an emotion that lasts in the memory of the consumer.

Every creative process has its constraints, and for Dom Pérignon, the constraint is the vintage. They exercise an absolute commitment to bear witness to the harvest of a single year, whatever the challenge may be, even if that means deciding not to declare a vintage at all. The goal with each Dom Pérignon vintage is to embody harmony of characteristics, thus creating an emotion that lasts in the memory of the consumer. This is why Dom Pérignon Rosé has only been released a total of 26 times in more than 88 years.

One of Dom Pérignon’s Best Ever Vintages

“Dom Pérignon Rosé Vintage 2006 takes us by the hand with an élan that becomes magnetic,” explained Vincent Chaperon, Dom Pérignon Chef de Cave. Chaperon joined the house as head of red winemaking for Dom Pérignon Rosé in 2005, and has been closely observing Rosé 2006 several times a year since it was made, tasting it almost every month in the last few years. His conclusion is simple and profound: Rosé 2006 is one of the best ever vintages.

“To achieve harmony we have to organize diversity in vineyard plots, grape varieties, base wines, picking time, and all the myriad other taste-influencing factors,” said Chaperon. “In this way, and this way only, can each Dom Pérignon vintage truly testify to what the year was.”

Dom Pérignon’s Rosé Vintage 2006 is a tribute to Pinot Noir. To work with Pinot Noir continually requires excellence and humility. In that regard, Dom Pérignon Rosé is a paradox to the point of contradiction as it is the perfect balance of Chardonnay and Pinot Noir. Dom Pérignon Rosé perfectly reveals the character of the grape: demanding, unpredictable, and vivacious, and at the same time playful and spiritual.

Although it took over ten years to reach the light of day, the color of Dom Pérignon Rosé dares to express all the tension between youth and maturity, between exhibition and restraint.

Time is an essential element of the Dom Pérignon equation. The time for the wine to mature actively in the bottle on its lees. In the dark of the cellars, each Dom Pérignon Rosé Vintage undergoes a slow metamorphosis. 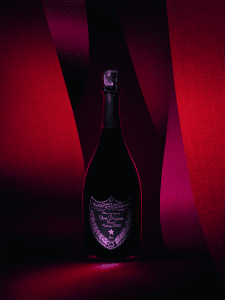 While the darkness of the cellars hid Dom Pérignon Rosé like a sleeping beauty, it was bathed in a decade dominated by the sun. A straight flush of vintages were produced by solar brilliance in 2002, 2003, 2004, 2005, and 2006 – a first in the history of Dom Pérignon. Each year the grapes sang out in full voice with a clear and vibrant tone. In 2002, gravitas, in 2003, bursting with fruit, in 2004, vivacious, and 2005, playful. Now, with Dom Pérignon Rosé Vintage 2006, the Pinot Noir transports us with an enveloping, sustained movement that amounts to a magnetic élan.

The weather in 2006 was generally warm and dry, with a few exceptions. A heat wave hit during July, and August was unseasonably cool and damp. September brought another stretch of warm summer weather that saved the vintage, drying out the few places where botrytis was developing and leading to above-average fruit ripeness. Harvesting began on mid-September and continued for nearly three weeks.

The resulting Dom Pérignon Rosé Vintage 2006 is instantly seductive. The bouquet is ripe and profound, like an invitation to bite into ripe fruit. Opening notes are a blend of dark spices and cocoa which develop quickly into fruit aromas. Roasted fig, apricot, and candied orange dance around smoky accents. On the palate, the fullness of the wine is syncopated by intensity and succulence. A silky mouthfeel melts into a smooth, grainy structure with subtle vegetal flavors, finishing with an expression of brininess and saline character.

The Artistic Interpretation of Lenny Kravitz

What makes the Dom Pérignon Rosé even more rare and eye-catching in 2019 is the limited edition bottle design. Lenny Kravitz, named as Dom Pérignon’s Creative Director in 2018, was inspired by the singular atmosphere that surrounds tasting champagne. His interpretation took life in the form of an elevated vessel featuring a hand-hammered finish on the surface of the iconic shield. The limited-edition bottles are available for the Vintage 2008 as well as the Rosé Vintage 2006. Kravitz also designed a box that doubles as a candleholder, in addition to a Champagne Table – a black lacquer piece with brushed brass trim that unfolds to reveal bottles of Dom Pérignon, glasses, and an ice bucket in the center.

“I wanted to create something that would elevate the ritual of drinking Dom Pérignon… that would bring people together,” Kravitz explained.

Made from only the best grapes in one single year, each vintage embodies total faith in the Power of Creation. The challenge of interpreting and reinventing the seasons in a vessel is a nonstop quest for perfection. With Dom Pérignon Rosé Vintage 2006, the most important part of the ritual is deciding who to share it with.

Dom Pérignon Creative Director Lenny Kravitz holds a bottle of Rosé Vintage 2006, featuring the hand-hammered finish on the surface of the shield.