Cheers to an all-female flight deck! In November 2021, two female crewmembers were paired to fly a CJ3 based out of Jet Linx Indianapolis.

This company milestone reflects the increasing diversity in cockpits across the world in private and commercial aviation. As of 2021, the number of female pilots hovers around 7% industry-wide, but there’s reason for optimism due to numerous new initiatives aimed at boosting diversity.

Pilots Tess Davis and Cortlyn Goldman recently flew together as the first formal female crew at Jet Linx, but certainly not the last. Davis has served as a Jet Linx pilot for nearly six years, and Goldman joined the team in August 2021 as a Destination 225° recruit.

“There’s much room for improving diversity in aviation, but it’s promising to see that Jet Linx has the ability and the desire to diversify. Strategic industry partnerships with WAI (Women in Aviation International) and programs like Destination 225° promise to bring more young, diverse pilots to our fleet,” said Davis.

Davis received her Bachelor of Science degree specializing in Professional Piloting from Kansas State University in 2009, but was first exposed to aviation long before that with her father operating as an A&P mechanic at a Part 91 aviation department for a company out of Wichita, KS.

“Though female pilots still make up a small percentage of the total pilot population, there are still thousands of us to offer advice, help, mentoring, teaching, and networking for women interested in aviation,” Davis explained.

Davis now serves as a source of inspiration and encouragement for Goldman, a recent addition to the Jet Linx family who is seeking to begin her aviation career on a high note.

“While I’m a bit older than Cortlyn, I recall the excitement of my first days as a pilot at her age. It’s also promising to see her come from the Destination 225° program – I believe that Jet Linx has greater exposure to young, more diverse candidates who come on board and offer more perspective in business and work life because of that program,” Davis added.

“I was fortunate to grow up in a family of aviators that pushed me to pursue a career as a pilot. Now that I am a pilot, I realize that the uniform carries a lot of weight and meaning to younger girls looking to become pilots. If I am going to be that one person they see in uniform that makes them contemplate it, even for just a few seconds, then I’ll do it with pride,” Goldman said.

Goldman stated that diversity at the Jet Linx National Operations Center is impressive, and she hopes that such diversity can be more commonplace across aviation in the cockpit as well. She added that there’s more pressure as a female pilot, not only to perform as well as male counterparts but to stand as role models and serve as inspiration for younger generations.

“Female pilots always get a little extra attention. I think it’s fine for people to ask us questions and be curious about our journeys, but I wish it didn’t need to be that way. When we get those questions, however, I always want to make time to inspire and encourage young aviators to pursue their dreams,” Goldman said.

Both Davis and Goldman have been involved in industry organizations such as WAI to help promote diversity within the aviation industry. Jet Linx has also formed partnerships with the NGPA and other organizations, such as Aviation STEMaha and the Burke High School Air and Space Academy, aimed at increasing access and expanding diversity in aviation roles. 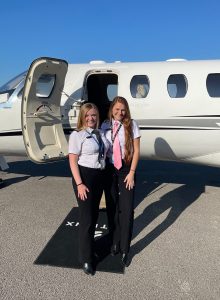 Goldman joined Jet Linx in August 2021 and recorded her first flight with the Company in October. She comes from a family of aviation professionals – both her parents, one her aunts and her brother currently work as Flight Attendants for Southwest Airlines.

“My father – who holds a private pilot’s license – expressed hope that one day at least one of his three children would go on to become a career pilot. I decided that would be me and I have been chasing that dream ever since,” Goldman said.

Goldman attended The University of Oklahoma (OU), majoring in Aviation. She earned all her licenses up to Commercial Multi-Engine Land, Turbine experience in a King Air C90B, and her Certified Flight Instructor – Instrument through OU. Goldman then became an instructor in 2019 and taught for two years while she finished her own training and degree to help build hours.

While some of Goldman’s friends funneled into other partnerships, Goldman remained patient for the right opportunity, which just so happened to come along during her senior year at OU in the form of the Jet Linx and Southwest career pathway, the Destination 225° program. Goldman did not even consider other pathways – she knew that she wanted time in corporate aviation but also wanted to eventually join her family at Southwest.

“As soon as the Destination 225° Program was announced, it was my number one option to advance in my career. With my family already employed with Southwest and my interest in corporate aviation, I knew immediately that this would be the path for me,” Goldman said.

“The Destination 225° program aligned with everything I wanted so I applied immediately. More and more cadets are being hired at Jet Linx which I see as a great sign for a relatively new program. I also think the strength of the program lies in its ability to attract a broad range of applicants, making your average flight crew more and more diverse. My personal experience with it has been great!” Goldman said.

For more information on careers at Jet Linx, click here.