Charting a Path for Future Aviators

On a cold afternoon in February 2021, a two-seater RV-12iS aircraft – built by the future aviators of the Burke Air and Space Academy – took flight in Omaha, Nebraska.

The aircraft’s successful takeoff represented more than just three years of meticulous teamwork and dedication – it signaled a glimpse into a promising future for a group of more than 30 aspiring aviators.

“The project was put together by a group called Aviation Nation,” said Andrew Brooks, Air and Space Academy (BASA) Director at Burke High School. “It began about three years ago and was advertised to students all across the Omaha area, but because of our Air and Space Academy, a lot of our students found it to be a great opportunity.”

If BASA students wanted to participate in the project, they had to first put together a toolbox to prove that they had the baseline knowledge necessary to work on a plane. Through Aviation Nation, they worked closely with a FAA-certified mentor who led them through each piece of the plane’s construction. Each student on the project put in time outside of school where they were allowed to work on electrical, interior aspects and the rivets on the wings. 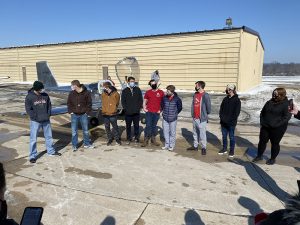 “I remember the nose cone was sitting on one shelf, the wings were on another shelf, and I was working on the rudder,” explained Emily Travis, a student at BASA. “At first, I felt like this thing would never fly. But it was amazing to see the plane in the sky knowing that I had built part of it.”

A number of Burke Air and Space Academy graduates made it out to Millard Airport to see the inaugural flight (which was piloted by a mentor involved in Aviation Nation). Two of those in attendance were twin brothers Scott and Tyler Swanson, former Jet Linx Flight Coordination interns and current students at the University of Nebraska at Omaha’s Aviation Institute.

“I learned a lot. That was the big part,” said Tyler Swanson. “I was focused on piloting, so I didn’t really know the mechanic side of an aircraft. It was a unique opportunity to learn more about aviation in a hands-on way. I don’t know where else this would have been possible.” The Burke Air and Space Academy opened its doors in 2011 and has assisted countless students in pursuing careers as airplane pilots, aviation mechanics and drone pilots. The Academy also offers opportunities to dual enroll with partner institutions, allowing students to earn college credit before enrolling at a university. 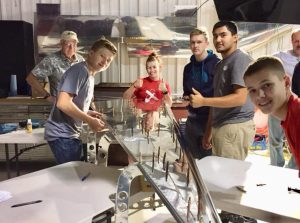 Since its opening, the Burke Air and Space Academy has gained interest from both students and organizations such as Jet Linx that seek to unlock opportunities for more young people interested in aviation.

“A lot of our students that are interested in math and science gravitate to our Academy because aviation is a fascinating field, and we have the facilities to match. There’s a lot to be excited about, and you don’t have to become a pilot. You can study mechanics, engineering and technology. Our programming can prepare students for a variety of careers in aviation, but the core skills they’re learning can be used outside of this field,” Brooks noted.

Open houses for the Academy in recent years have swelled, and even a virtual open house in 2020 saw sustained interest from students and parents wanting to learn more about what a career in aviation might look like. Going further, Brooks also noted that recruitment to the Air and Space Academy continues to focus on diversity.

“Our current demographics reveal that roughly 20% of our students are female, and about 30% of our students identify as Hispanic, African-American or non-white. While this is a small sample size, we’re happy that we’re above the industry average.” 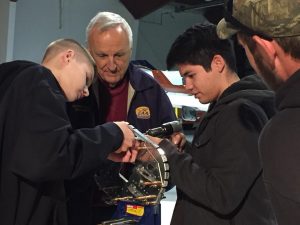 The success of the program is in many ways fueled by partnerships with companies in the aviation space. “Since 2011, we have dedicated our program to building options and opportunities for all students who would like to investigate a career in aviation. Burke Aviation has developed direct pathways for our students to experience the real world of aviation and begin a lifelong career,” Brooks elaborated. “We’ve done so with the help of the best local aviation businesses like Jet Linx.”

Through a partnership formed in 2019, BASA students have direct access to exciting opportunities such as internships, mentorships and pipelines to aviation careers via Jet Linx. Dee Ruleaux, Jet Linx Director of Recruiting & Industry Partnerships, was instrumental in the creation of this partnership and also serves as the Chair of the BASA Advisory Board.

“We already have existing relationships with universities, but we wanted to grant opportunities to younger prospects. Burke High has an amazing aviation program in Omaha. We knew that this would be a good fit for Jet Linx, but this latest development is a reminder of the impact of our involvement,” Ruleaux said.

In December of 2019, Ruleaux coordinated a trip to Southwest Airline’s headquarters in Dallas, where students received a once-in-a-lifetime opportunity to tour training facilities and interact with professionals at Southwest – a real life display of what would be possible through the Destination 225° program (an innovative pilot career pathway program co-founded by Jet Linx and Southwest Airlines). 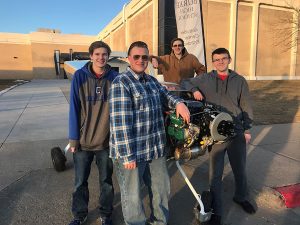 Other members of the Jet Linx team have also dedicated time to help improve the performance and effectiveness of the Academy. In the summer of 2020, Scott McGregor, Chief Operating Officer at Jet Linx, spent an afternoon with BASA leadership to perform a SWOT analysis, which helped prioritize action items for their strategic plan.

“During a board meeting in 2020, we discussed the importance of putting together a strategic plan through a SWOT analysis, and I knew that Scott was in a perfect position to help the Academy with his expertise,” Ruleaux added. “This was a big step to define targets and areas where the Academy could improve. We spent an entire afternoon with Scott to run the analysis and interpret the results, which were used to determine what kind of support will be needed for sustained success and improvement.”

Jet Linx also provides material support to BASA in other ways, by way of marketing and brand support. Jordan Maddex-Kopp, Jet Linx Vice President of Marketing and Strategic Partnerships, aided the Academy with a rebranding in 2019 that included a new look and new logo now featured on shirts, signage and other Jet Linx-produced marketing collateral for the Academy.

Through material support, career advice, leadership and mentorship, Jet Linx enjoys supporting the bright future of the Burke Air and Space Academy and its students.