Changing the Future of Aviation 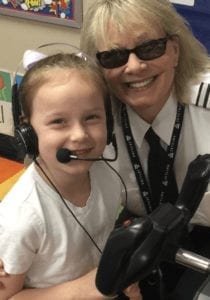 Jet Linx Pilot Shari Drerup, is one of the female mentors in the aviation community who is actively sharing her passion for flying with future generations. Drerup was approached by her granddaughter’s preschool teacher to do a presentation about flying airplanes. “The class had been discussing gravity and airplanes at one point and Isabelle, my granddaughter, kept telling her teacher, Ms. Dawn, that her grandmother flew jets,” Drerup explained. “Her teacher thought she was making it up and didn’t really believe it. It is kind of far-fetched if you think about it!”

Drerup continued, “I pick up Isabelle at preschool regularly when I’m not flying and the teacher said one day, ‘You know, Isabelle keeps saying you fly jets’ and I said, ‘Yes, that’s true! I work for Jet Linx!’ She asked if I would consider coming to the class to do a presentation on flying and I said ‘Of course!'”

On May 8, 2018, in full pilot uniform, Drerup enthusiastically visited Isabelle’s classroom at Calvary Preschool in Alexandria, Louisiana and setup a mock airplane – lining up chairs two by two behind a desk where her yoke and throttle quadrant was placed. “I found a YouTube video of a flight crew boarding and loading a CJ3, which I fly,” Drerup described. “I had the children pretend they were boarding an airplane, had them buckle up, taxi out and watch the video of the CJ3 taking off and climbing out – they were amazed!”

One by one, the children took turns flying, with Drerup instructing them on how to manipulate the controls of the yoke and the throttles. “The pilots in the video were men so the girls were a little hesitant to put their hands on the yoke and throttles, so I explained that girls can fly, too – their eyes became really big and with a look of disbelief, they said, ‘Really?’ It was like a lightbulb went off when I was showing them how to manipulate the controls.”

Drerup’s presentation was a smashing success. “Parents came to me the next day and her teacher also and said the kids couldn’t stop talking about flying. After I left that day, the girls made a cockpit out of items in the classroom. I think many children don’t realize they can fly airplanes as a career, especially girls. I want Isabelle – and all of her classmates! – to know she can be anything she sets her mind to, and I can’t wait to do this again when she’s in kindergarten next year!”

Drerup obtained her pilot’s license at 19 while attending college majoring in accounting. She married after graduating from college and became a stay-at-home mom, putting flying on hold to raise her two daughters. After 20 years of marriage, Drerup and her husband divorced, and she returned to flying because she realized she “missed it so much.” Upon her return to the cockpit, she discovered her love for flying was stronger than ever before. “I decided to get all my ratings to become a flight instructor. I sold my home and moved to Baton Rouge to fly. I chose to fly for Jet Linx because I’m able to live in my home in Alexandria, Louisiana and didn’t have to relocate. As a floater pilot I support all of the Bases that need assistance to crew either Citation 500 or Citation 525 series aircraft. I have formed strong bonds with the other Jet Linx pilots and the team members throughout the company. It’s been a wonderful experience. If I can go from the carpool line picking up my daughters after being a housewife for 20 years to flying jets, anything is possible!”

According to the Boeing Pilot Outlook, the airline industry will need nearly 800,000 new pilots over the next 20 years – that equals 109 pilots per day. As the aviation industry is growing, the maturing pilot population is simultaneously exiting the workforce, leaving the industry with a void to overcome. Grade schools and Universities across the nation have taken note and are beginning to offer programs to students who have an expressed interest in the aviation field at an early age by forming their own educational outreach programs, and some are partnering with colleges and Universities who offer STEM.

The demand for qualified pilots has never been greater – if you’re passionate about flying, now is the time to put your passion to work! If you’re looking to join a team that’s committed to their core values and is determined to provide a truly wonderful experience for its team members and clients, join the Jet Linx family and take flight. Contact us for available positions and discover first-hand why Jet Linx soars above the rest!

In each edition of My Home Base, we feature a member of the Jet Linx team from across the country and showcase what they feel makes their Jet Linx location and their city special. In this edition, meet Abigail Hensley, Jet Linx Indianapolis Personal Flight Concierge.

In each edition of My Home Base, we feature a member of the Jet Linx team from across the country and showcase what they feel makes their Jet Linx location and their city special. In this edition, meet R. David Taylor, Jet Linx Washington Pilot.

In each edition of My Home Base, we feature a member of the Jet Linx team from across the country and showcase what they feel makes their Jet Linx location and their city special. In this edition, meet Abigail Hensley, Jet Linx Indianapolis Personal Flight Concierge.

In each edition of My Home Base, we feature a member of the Jet Linx team from across the country and showcase what they feel makes their Jet Linx location and their city special. In this edition, meet R. David Taylor, Jet Linx Washington Pilot.